The High Cost of Radium Contamination in Cities – Next City

The High Cost of Radium Contamination in Cities 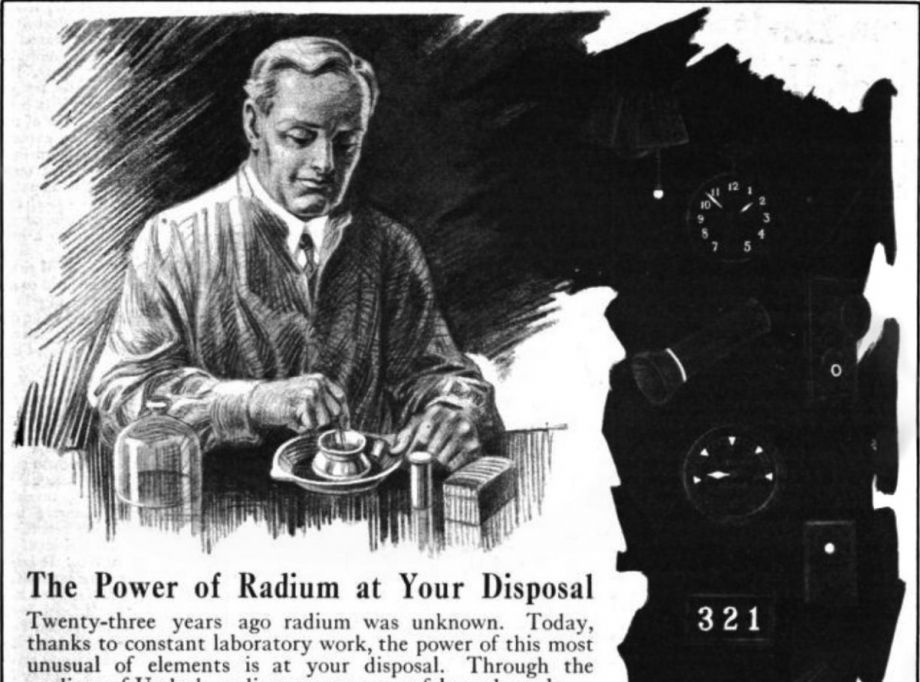 The harmful effects of high levels of radiation cause legitimate alarm, and the fact that the danger can’t be seen serves to only amplify fears. But a onetime cultural curiosity — the early-20th-century belief that radium was something wondrous and beneficial — has left many U.S. municipalities and states with a problematic legacy. In urban areas, radium contamination left over from that era often goes undetected for decades, and cleaning it up isn’t easy.

The long-shuttered U.S. Radium Factory, which made glow-in-the-dark watch faces in the 1920s, contaminated more than 220,000 cubic yards of soil in four Essex County, N.J., municipalities. Some of that material was used in the foundations of hundreds of houses. The cleanup, which lasted through the 1990s and most of the 2000s, cost about $218 million.

A former Naval Air station in the city of Alameda, Calif., was contaminated by the radioactive paint applied to aircraft dials and other equipment in the 1940s and ’50s. The chemical waste was dumped down storm drains. In 2010, the Navy finished replacing thousands of feet of the most seriously contaminated sewer lines leading to a lagoon. Two years later, the dredging of the lagoon was completed.

The radium contamination — also thanks to military aircraft paint — of a building attached to a popular Seattle indoor sports arena was made public in 2013, three years after the Navy discovered the problem.

In Lansdowne, just outside Philadelphia, the U.S. Environmental Protection Agency needed to demolish a house; cart away contaminated soil, sidewalks and portions of the street; repave the street; and replace a sewer line. The source of the contamination? From 1924 to 1944, a University of Pennsylvania chemistry professor processed enriched radium ore in the basement of his home.

Contaminated sites continue to come to light because of radium’s peculiar history and attributes. After the element was discovered in 1898, it actually sparked a fad, with claims made for its health benefits. In a 2011 essay in the New York Times titled “Radiation’s Enduring Afterglow,” George Johnson wrote, “Vacationers soaked in radium hot springs. Magazines carried advertisements for radium suppositories, radium toothpaste and radium bread — quack products ranging from useless to harmful. As late as the 1950s, customers could peer inside their own feet through shoe store X-ray machines, the scientific way to ensure a perfect fit.”

The light green area of this map shows the sections of Great Kills Park in Staten Island that were closed because of radium contamination. According to the National Park Service, “By the summer of 2014, the NPS will have installed over 20,000 feet of perimeter fence, cut back vegetation and … excavated approximately 40 locations of radioactive contamination which pose the greatest potential health risk.”

When Leo Wainhouse, deputy director of the Office of Radiation Protection in the Washington State Department of Health, began working more than 30 years ago, the office regularly collected instruments and knickknacks that contained radium. The contamination of the building next to the Seattle sports arena was “mostly underground,” he explains, with the assumption that workers cleaned their brushes in the sink and probably dumped buckets of mop water outside. As a result, drain lines and soil had to be removed.

“The two rooms were easy to clean up,” Wainhouse says, while the shed that contained one of the rooms is scheduled to be dismantled soon. Contamination of a site like this is “a pretty isolated incident here in Washington,” he adds. On the West Coast, radium issues are usually identified at former military sites. On the other hand, every large city from Chicago to the East Coast was once lit by gas lamps that used radioactive thorium, and that region’s legacy of hundreds of mills that processed the element multiplies the problem.

Unlike many other types of contamination, radium sits around unseen. And because it breaks down so slowly, due to a half-life that lasts about 1,600 years, contaminated stuff just remains there. The only way to clean up a radium site is to literally move all the dirt and infrastructure away.

Urban areas with lingering radium present especially difficult situations. If, say, a landfill were contaminated, it wouldn’t need to be restored, but if people are living on top of a radium site, the soil and infrastructure need to be replaced. During the Essex County cleanup, an EPA representative told the Star-Ledger that knocking down all the houses would have been cheaper in many cases, but the cities’ mayors feared creating blight. (Also, displaced residents must be put up in temporary housing, and you can’t empty out an entire city all at once.)

Like Washington, every state government has a bureau or division devoted to radiation control and protection that monitors nuclear power operations and any facilities with X-ray machines. The state might be in charge of a radium cleanup or, if the problem is so bad as to earn a spot on the Superfund list, the state partners with the EPA. But cities don’t always welcome Superfund status. In New York City, the Bloomberg administration struggled to avoid having the EPA designate the polluted Gowanus Canal in Brooklyn as a Superfund site, so as not to stigmatize the area with the dreaded this-is-a-major-mess name. The city, which offered to clean up the waterway itself, lost the battle, and the canal was put on the federal list in 2010.

To pay for cleanups, government agencies first look to hand the bill to the people or organizations responsible for releasing the hazardous pollutant. (In Seattle, the Navy is footing the bill for the cleanup.) If the EPA funds the process, federal law requires states to pay 10 percent of the remedial cost. If a state is going it alone, it usually reaches into some sort of fund that’s been established. In Pennsylvania, for example, the Hazardous Sites Cleanup Act of 1988 provides funding. Revenue for the fund comes from sources such as hazardous waste management and transportation fees, penalties and cost recoveries from responsible entities.

We no longer sip Radithor, a brand of radium-infused water, to energize us. But this and all the other long-gone manifestations of the radium craze still have the ability to haunt our cities, and to cost governments a lot of money.