What the Racial Wealth Gap Means for U.S. Cities – Next City

What the Racial Wealth Gap Means for U.S. Cities 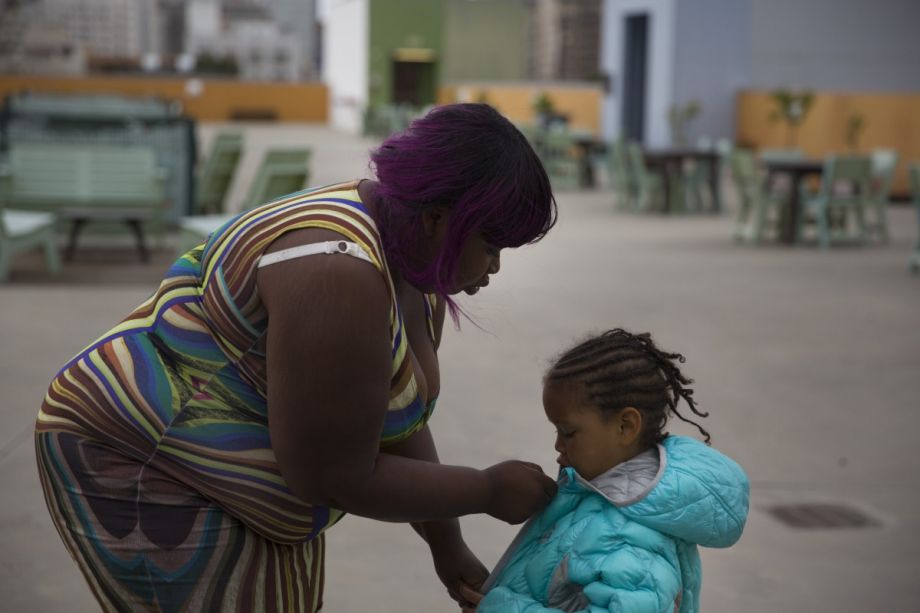 Homeless Mariah Hernandez, left, zips up the jacket of her 4-year-old daughter Xiomara while playing on the rooftop of the Union Rescue Mission Thursday in Los Angeles. (AP Photo/Jae C. Hong)

White families tend to earn more than black or Latino families, but a new report released Monday says wealth inequality may be an even greater concern than income inequality.

The racial wealth gap, which looks at a person’s total net worth, is much wider than the gap between annual incomes, and it has gotten even wider since the Great Recession, when people of color were hit the hardest. This gap will likely have lasting ramifications. If current public policies stay the same, the report’s authors calculate, it will take a staggering 228 years for black families to accumulate the same amount of wealth that white families have today. For the average Latino family, it will take 84 years.

In many majority-minority cities, such as Baltimore, Detroit and Chicago, overcoming challenges around housing, education and employment opportunities could help residents get ahead, start businesses, provide for their children and thrive, rather than just survive. As Next City equitable cities fellow Oscar Perry Abello has reported, wealth inequality, “besides fewer sources of capital from friends and family … means fewer assets to use as collateral for business loans from banks and other institutions.”

The report, “The Ever-Growing Gap: Without Change, African-American and Latino Families Won’t Match White Wealth for Centuries,” examined the accumulation of wealth over the past 30 years and how wealth-building policies have given white Americans a leg up. Over the past three decades, the average wealth of white families has grown by 84 percent, three times as fast as the rate for African-American families and 1.2 the growth rate for Latino families, according to the research from the Corporation for Enterprise Development and the Institute for Policy Studies.

By 2043, when people of color overtake whites as the majority in the U.S. population, the wealth divide between white families and Latino and black families will have doubled, on average, from about $500,000 in 2013 to more than $1 million. 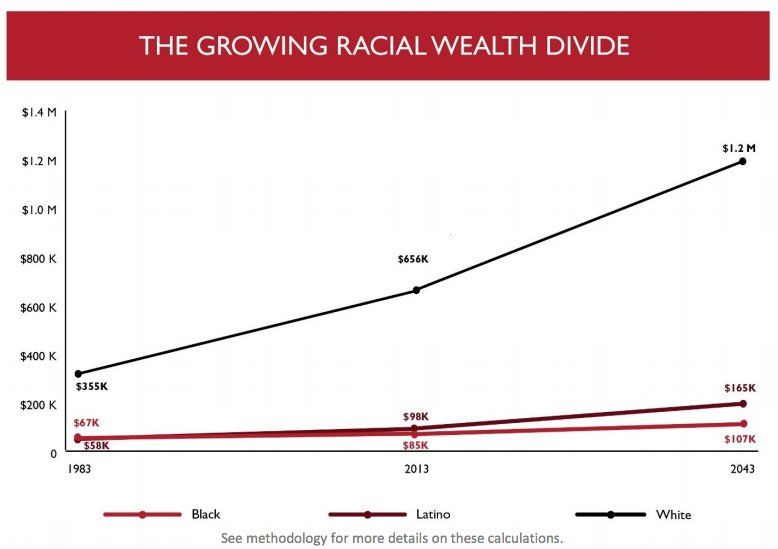 (From “The Color of Wealth in Boston”)

Other studies on the racial wealth gap in several cities have also arrived at troubling conclusions.

“There’s this gulf between whites and minorities of color across all types of assets,” Ana Patricia Munoz, a co-author of by the Federal Reserve Bank of Boston, told the Boston Globe last year. “The way we usually measure inequality is by income, but those differences aren’t as high as the differences in wealth. This tells you what they have to invest for future generations.”

The Federal Reserve Bank report found that the median white household in Greater Boston has $256,500 in net assets, such as retirement savings, stocks or a checking account, while none of minority groups studied had net assets over $18,000. Similar surveys from Miami, Tulsa and Washington, D.C., also found vast disparities.

An early 2016 report out of Los Angeles, another majority-minority city, found that wealth differentials across racial groups are far more pronounced than income differentials, leaving communities of color particularly vulnerable in the case of emergencies, unemployment or other unexpected costs. 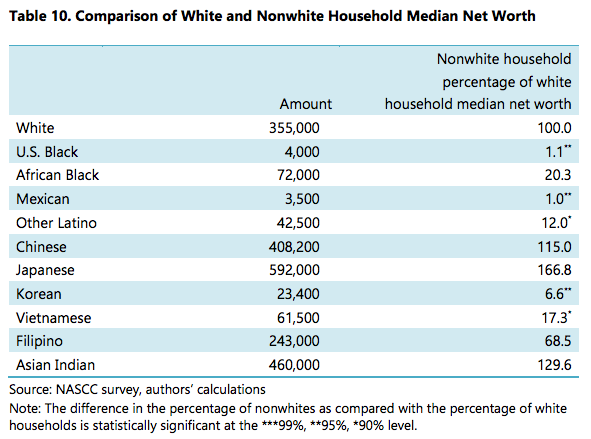 The racial wealth divide in L.A. (From “The Color of Wealth in Los Angeles”)

That study, “The Color of Wealth in Los Angeles,” also found a disconcerting hurdle to families of color building wealth. “Because communities of color often have higher-cost debt and higher debt-to-income ratios, they are more likely to be denied credit and their ability to build assets is limited,” it says. “Although, research has shown that when blacks have similar credit scores as whites, they are still more likely to be denied credit. This contributes to lower asset ownership and lower asset values when compared with white households.”

There are no easy fixes for closing the gap, and ongoing discriminatory practices make it even harder. Even for black or Hispanic students who get a four-year degree, their wealth returns on that degree will typically be much lower than for white students. The reports do offer a number of suggestions, including expanding eligibility for the Earned Income Tax Credit and other tax policies that help families of color build wealth, ensuring every child has a Children’s Savings Account, creating an annual net worth tax on high-wealth individuals, removing barriers to retirement savings, and making sure that policies aimed at bridging the wealth gap consider the wide diversity among nonwhite populations and are targeted or adapted accordingly.

Many of these ideas also appear in the Movement for Black Lives’ new policy agenda, which outlines what the U.S. should do to address the disparities faced by black communities in health, employment, education, criminal justice and housing. To put cities with large low-income communities on a path out of poverty, the platform suggests, federal and local governments should focus on services for the black communities. Creating job training programs and opportunities for black youth in Detroit or Chicago, for example, would boost the economy of the city as a whole.

Failing to address the growing problem, the “Ever-Growing Gap” report says, will “severely impact the economic opportunity of communities of color,” and will have ramifications for the economic well-being of the country as a whole. The authors write:

When wealth and opportunity are more evenly distributed, financially vulnerable families are better able to get ahead, rather than just scrape by. Imagine that instead of low-wealth black and Latino families finding themselves unable to deal with fluctuating incomes or how they’re going to make it through an unexpected financial emergency, they have the freedom to invest in their children’s future aspirations. Or, instead of resorting to selling loose cigarettes or CDs to earn a little more money for their families, blacks and Latinos have the opportunity to build long-term wealth by owning their own businesses. These are just some of the opportunities lost because of the growing racial and economic inequality we face.