Building Homes and a Multi-Racial Construction Industry in New Orleans 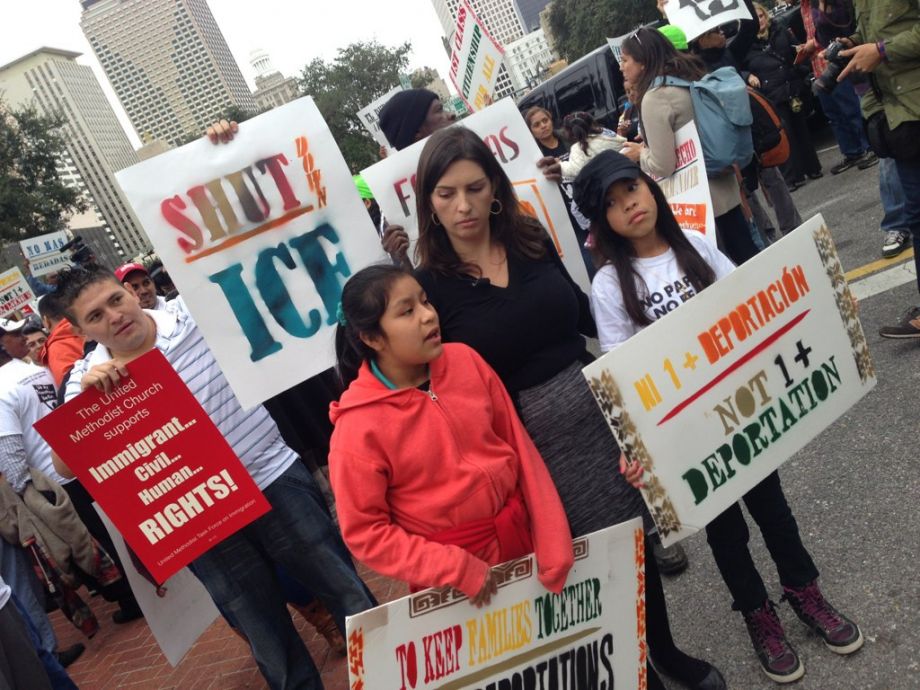 Alfred Marshall was among the roughly 25 percent of residents of the B.W. Cooper public housing complex — more commonly known as the Calliope Projects — who were allowed to remain in their homes as developers tore down most of it in 2011. The demolition of the Calliope, which housed more than 4,000 people before Hurricane Katrina, was part of a highly controversial effort after the storm to redevelop all of the city’s traditional housing projects.

As Marshall watched buildings go down from the vantage of his living room window, he noticed something that troubled him: the workers on the site were predominantly Latino, and none were African American, the overwhelming majority demographic in the neighborhood.

“Staying across the street, I didn’t see anybody who looked like me,” says Marshall. “I thought, ‘They’re taking our jobs,’ since this is our community.”

In the aftermath of Hurricane Katrina, while tens of thousands of the city’s African-American residents were dispersed across the country — 100,000 of whom have yet to return — a huge number of Latino workers were drawn to New Orleans by jobs created by the rebuilding process. As working-class African Americans trickled back, many found that the construction jobs they would have otherwise filled were already occupied by these new immigrants.

Marshall’s exasperation about this soon shifted focus, however, as he realized his ire should be directed not at the Latino laborers — who, he found out, were being underpaid and forced to work and live under substandard and unsafe conditions — but at the labor practices widely employed by post-Katrina contractors.

“I realized that black people and Latinos were all catching the same hell,” says Marshall. “They were playing the game on us.”

Dominant cultures have relied on the existence of permanent underclasses to sustain their positions of privilege throughout history. Perhaps nowhere in the United States is this more articulately pronounced than in the Gulf South, where chattel slavery gave way first to legalized segregation, and then to the more nuanced system we have today that allows a white upper class to retain the vast majority of wealth and power among a largely poor African-American community.

In New Orleans after Katrina, the arrival of these Latino immigrants, some of whom came to the country illegally, provided the power structure with an entirely new underclass. As the Bush and Obama administrations ramped up immigration law enforcement, Latino workers found themselves under the threat of exploitation and deportation, with roughly equivalent or even fewer rights and protections — despite their efforts in literally rebuilding the city — as African Americans enjoyed under Jim Crow.

African Americans and Latinos make up roughly 65 percent of New Orleans’ population, and many live near or below the poverty line. The existence of such a large underclass presents significant challenges to the city’s resilience, simply because these people are highly vulnerable and lack the resources and public support to withstand or bounce back from a disaster — a fact New Orleans’ inequitable recovery has made painfully clear.

But Marshall wasn’t the only person who noticed what was happening in the labor landscape. Members of STAND with Dignity, a grass-roots organization of low-income residents and workers in New Orleans, were also on the scene of the Calliope demolition. Marshall met a group of STAND advocates and, together, they began lobbying the contractor and the city’s housing authority to abide by a provision of the federal Housing and Urban Development Act of 1968 that states that any project receiving HUD financing must employ low-income residents of the area — ideally residents of the housing project in question — as at least 30 percent of the project’s workforce. After a fight, contractors on the project hired the minimum number of Calliope residents required by law: six employees. Marshall and STAND kept pushing, securing 50 jobs for Calliope residents.

STAND with Dignity is part of a larger umbrella network called the New Orleans Workers Center for Racial Justice, which organizes on behalf of workers of color in the post-Katrina milieu. The center includes STAND, the Congress of Day Laborers, and the Alliance of Guestworkers for Dignity, the former focusing primarily on low-income African Americans and the latter two on the rights of Latino immigrants.

Building solidarity between African-American and Latino workers has been one of the center’s overarching areas of focus, and one that strives to increase equity among all New Orleans residents. By working to empower members of the city’s underclass, the center is chipping away at the mechanisms that sustain large pockets of vulnerable people in the city, whose existence as such threatens New Orleans’ resilience.

Sentiments such as Marshall’s, that Latinos were stealing African-American jobs, have been encouraged by contractors who see the opportunity to divide and conquer — or, at least, provide the least pay and weakest protections to their workers. Jacinta Gonzalez, a lead organizer for the Congress of Day Laborers, relayed a telling incident that took place shortly after the storm at a New Orleans hotel that was housing Katrina refugees while being rebuilt. The people rebuilding were all Latino immigrants, many brought in from Venezuela and being paid $4 an hour. The people staying at the hotel were predominantly working-class African Americans. When one Latino worker asked his supervisor why the people staying at the hotel were not being employed to rebuild it, his boss, Gonzalez said, replied that the African Americans were “too lazy.”

Each branch of the New Orleans Workers Center for Racial Justice has seen significant victories on the ground and at the policy level. With the momentum from their small victory at the Calliope Projects — and after seeing all 50 workers laid off after the job’s completion — Marshall and STAND continued to advocate on the basis that workers do not want jobs, but careers. After two years of advocacy, the Housing Authority of New Orleans (HANO) allowed STAND to shape a piece of policy for the agency that capitalized on the 1968 HUD act by creating a workforce agreement that guaranteed construction projects in New Orleans with HUD assistance involve certified union job training.

Gonzalez says one of the Congress of Day Laborers’ biggest triumphs was, after a three-year fight, pressuring the local sheriff to adopt a policy to not submit to federal Immigration and Customs Enforcement (ICE) hold requests, which call on jails to not release inmates who are immigrants — even those held on minor infractions — until ICE has reviewed their immigration status, a process that regularly takes months and leads to deportation. This policy at Orleans Parish Prison, which now treats immigrant inmates the same as any other, is the first of its kind in the South.

But these victories are far overwhelmed by the scope of the work ahead. As the final major public housing complex still standing in New Orleans, the Iberville Projects, was slated for demolition last year, STAND looked forward to seeing the workforce agreement policy it had written put into practice. But the contractors resisted, citing Louisiana’s anti-union Right to Work laws that make illegal any contract that requires union participation. While the entire point of the workforce agreement was to bolster job training for workers hired under the 1968 HUD act, Marshall says the hired Iberville residents have been relegated to menial duties, while contractors claim this amounts to job training.

“They’re having these guys trash apartments and calling it job training,” he says. “That’s not training.”

Gonzalez notes that conditions for Latino immigrant workers have improved in New Orleans. It would have been nearly impossible for them to devolve, since in the early days after Katrina many were tasked with removing toxic waste without safety equipment by day, and slept in the cramped quarters of gutted houses by night. The Congress of Day Laborers has grown into a potent force for advocacy, but the problems facing its constituents seem to be compounding. Wage theft remains a rampant problem, and a federal project launched last year, the Criminal Alien Removal Initiative, has put scores of immigration agents on the streets conducting “stop and frisk”-style interrogations that have created a terrifying effect among the Latino community.

A resilient city must contain many things. One of these is a labor landscape that allows people to secure employment that provides for their basic needs. The labor landscape in New Orleans shuts out a broad swath of its citizenry from such employment, often based on race — the unemployment rate among African-American males is 53 percent. While the gains of the New Orleans Workers Center for Racial Justice remain seemingly small, the historic scope of the issues against which it is fighting puts the magnitude of the organization’s efforts into perspective. The impact of their victories is incremental on a policy level, but provides a prime example of an ethos that fights for resilience on behalf of all a city’s residents.