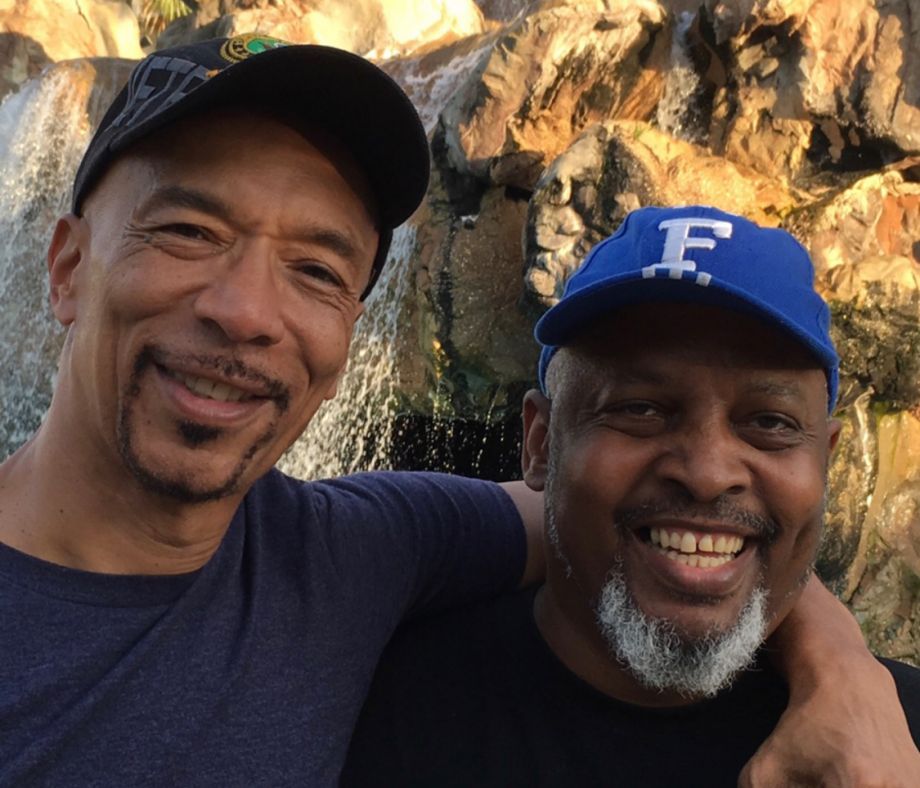 James Bailey (left) and Larry Grant bought the home they were renting after it was sold to a new owner.  “Instead of helping us to get into a home, I felt like we were forced into getting a home,” Bailey says. (Photo courtesy James Bailey)

James Bailey has lived in his Atlanta home for 10 years. With three floors and six bedrooms, it works well for him and his “brother from another mother,” Larry Grant.

The house in DeKalb County began as a rental. But in 2020, Bailey and Grant were given a choice: Buy the house or start finding another place to live.

“The roof just fell in on my head is what I felt,” Bailey says. “I’m a caregiver. I’m in my 60s. We love this place. We don’t want to move. And then the big thing is: Was I financially ready to buy the house?”

This choice was presented by the new owner of the house, Atlantica Properties, as part of a program Atlantica created called OWN DeKalb. Atlantica says OWN DeKalb is designed as a way to increase affordable housing in Atlanta and make sure more people own where they live. But questions remain about who the program serves and whether it creates residential stability.

It began in 2019 when Atlanta-based Atlantica Properties bought 72 homes in DeKalb. The for-profit real estate investment company purchased the homes from the Housing Development Corporation of DeKalb County, a nonprofit that focuses on affordable housing in Atlanta’s fourth most populous county.

Atlantica, which partnered with real estate private equity fund Auerbach Funds, saw an opportunity to convert the homes from rental to owner-occupied units. In DeKalb, 54.6 percent of homes are owner-occupied, almost 14 percent less than the state average.

“When I saw what the homes were and where they were, we really wanted to have a conversation with the housing authority to make sure they understood what we were trying to accomplish,” says Darion Dunn, managing partner of Atlantica. “We wanted to do something more than just purchase their homes and make it a transaction. We wanted this to be more of a mission.”

Filling the 72 homes with owners rather than renters would cut down on transiency within neighborhoods and schools and help people build wealth, says Dunn, who grew up in DeKalb. Atlantica’s goal was to sell these houses at fair-market value to people of low- to moderate-income.

Atlantica sent letters to tenants to offer their home for purchase. Though Atlantica wouldn’t renew any leases, all existing tenants whose lease expired could rent month-to-month indefinitely for the same price as before, as long as they were making a sincere effort to find another home, Dunn says. Some tenants stayed more than six months past their lease expiring.

In order to help would-be homeowners, Atlantica referred those who contacted them to resources such as real estate agents, mortgage brokers and affordable homeownership nonprofit Neighborhood Assistance Corporation of America.

If existing tenants didn’t want to buy their home, Atlantica had a coordinator available to help them find a new place to rent in the same area, price point and school district.

Bailey and Grant wanted to stay in their house. They liked it, had a routine set and knew their neighbors. Bailey even became block captain.

“No one talked to us,” Bailey says of Atlantica. “No one said, ‘We could help you out with your finances or make sure your credit is good.’”

A friend introduced him to a realtor and a mortgage broker, who began helping to fix his credit. Bailey and Grant ended up buying the house for $231,000. Similar homes nearby sell on average for about 8 percent more, according to Zillow.

Bailey and Grant had paid a monthly rent of $1,350. The mortgage now costs $1,100, not including insurance or repairs. Atlantica bought them a $500 house warranty that covers an appliance breaking.

Still, Bailey says he didn’t feel a need to buy until that letter came from Atlantica. “Instead of helping us to get into a home, I felt like we were forced into getting a home,” he says.

Many of Bailey and Grant’s fellow tenants didn’t purchase their homes. Only six homes were sold to existing tenants. The rest went on the open market. Dunn says Atlantica put in the online listing information and told the agent that priority was given to owner-occupants.

“When you don’t have intention of who you’re selling the house to, you’re going to have the private market kind of operate how they operate, and the most efficient way that these markets operate is to sell to the highest bidder,” Dunn says. “Of course, the money is important to us and our investors. But we wanted to make sure there were other factors involved into the sale of this, which is different than the average home on the market.”

To that end, Dunn says Atlantica turned down higher offers for the homes from investors. It also achieved its goal of selling at least 90 percent of the homes to owner-occupants, although there are no deed restrictions specifying how long owners must live in their home or whether they can rent it out.

It targeted people at 60 to 100 percent of area median income (AMI). Atlantica didn’t restrict home sales based on income, nor did it track whether the 92 percent of buyers who weren’t existing tenants came from DeKalb, a different part of Atlanta or even out of state.

“It doesn’t seem like a strategy for affordable housing and giving back to the community because the community is not really defined to DeKalb County. It’s for whoever can afford to buy these houses,” says Prentiss Dantzler, assistant professor in Georgia State University’s Urban Studies Institute.

Owning a home is about more than the ability to afford the mortgage, Dantzler says. For many families, it can be challenging to cover repair costs long-term. (Bailey and Grant found this out quickly. One of their first repairs came when they were closing on their house in summer 2020: broken air conditioning.)

Owning a house doesn’t always mean wealth creation either. It can mean debt.

“I see a lot of people where they’re overselling homeownership, particularly for low-income groups because it’s not just owning a house. It’s more so taking care of the house for the long term,” says Dantzler, who studies housing, poverty and neighborhood change. “Historically, we’ve privileged homeowners over every other form of ownership type in the country, and it’s deeply problematic.”

In order to make sure people stay in their homes, he says, there should be a greater focus on not just homeownership but people in rentals, emergency houses, transitional housing and extended stay hotels.

Atlantica argues that it has achieved its goals. As of late February, all but three of the 72 homes in OWN DeKalb were sold. Those last homes are under contract. Since Atlantica began selling the houses about two years ago, homeowners have earned more than $1 million of equity from appreciation, Dunn says.

Now, Atlantica wants to take the OWN DeKalb concept to other parts of the Atlanta region. The next place it’s looking is intown, the city’s rapidly gentrifying urban core. “There’s a lot of folks that are legacy residents of those communities that aren’t able to participate in the success of those communities,” Dunn says.

Future iterations of the program will evolve. Tenants with financial challenges are often ineligible to purchase homes based on lenders’ criteria, he says. So in order to increase the percentage of homes bought by existing tenants in OWN DeKalb, Atlantica wants to partner with organizations that can assist with financial literacy and homeownership training.

Meanwhile, Bailey is settled in his three-story house with Grant, even if he hadn’t had plans to buy it. He says one of the main benefits of owning the house is peace of mind. As long as they pay, no one can take it away.

“Everybody needs a decent place to stay,” he says. “Why do we make it so hard?”