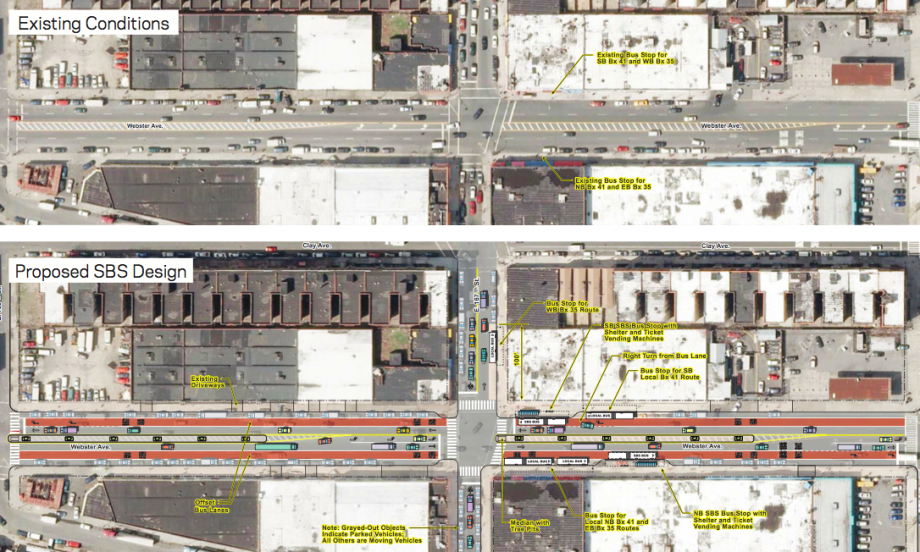 Last week, the New York City Department of Transportation announced that in the Bronx’s planned Webster Avenue bus rapid transit corridor, buses will run in lanes along the side of the street — not in the median lanes previously being evaluated. For this 5.3-mile route through the center of the borough, the decision will reduce bus travel speeds, increasing rider commute times and ultimately limiting the benefit of the BRT investment. The move evoked concern that the city was settling for less-than-best when it comes to bus transport in New York.

Yet the issue is more complicated than that, since many BRT lines share their routes with local buses. This has implications for cities across the country that are investing in BRT.

Here’s the problem: In addition to BRT along Webster Avenue, New York plans to continue offering local bus service that would hail at all the existing, very frequent stops (whereas BRT would only stop every half-mile or so). If bus lanes were placed in the middle of the street, local buses would either be stuck in regular traffic lanes or have to weave in and out of the middle lanes to get to and from local stations. Or the city would have to put up the funds for local stops every block along the median bus corridor, which would be financially — and probably physically — prohibitive, in addition to likely holding up express buses while local buses are stopped.

Moreover, median lanes would quite inconveniently require automobile drivers to either enter the bus lane to turn left, or go around the block to make a turn.

So the city has settled for lanes along the side of the street that can be used both by BRT and local services. In this design, Webster Avenue joins the other BRT corridors already up and running in New York and almost every other city in the country that’s building BRT. Those side lanes will almost definitely get obstructed by car traffic, which will have to move through the lanes to make right-hand turns. In addition, the insistence of community groups and local businesses that parking be preserved along the sidewalk means that parallel parking, positioned to the right of the bus lane, will be a constant source of interference into the BRT traffic.

The Webster Avenue corridor, currently served by the Bx41 from Gun Hill to the Hub, is more than just a local route; it is currently being considered for express service to and from La Guardia Airport, providing the Bronx its first (potentially) quick, direct connection to a major jobs center.

Chicago, which has its own major BRT plans in development, is currently studying whether to place its BRT routes for its Western and Ashland Corridors in the median or along the side of the street. Four alternatives are up for consideration, two of which would include a median routing (and buses with left-side doors), with the other two running on the side of the street, sharing the lane with local bus services.

That city’s initial analysis demonstrates the advantages of the median alignment: Faster service for customers (up to 80 percent quicker than current operations), and a resulting larger increase in ridership. A comparison of options by Grid Chicago provides an overview of those benefits, in the context of their relatively higher cost. If the goal of the transit system were to simply to increase the ridership of the express transit services — ignoring all other issues — the median would appear to be the right place to go.

But it does seem rather incongruous to promote a median-running BRT lane when local services remain relegated to the side of the street, especially when some passengers are likely to choose on the spot between the two options when taking their trips. Does it really make sense to use the bus-only lane half as much as there are buses available to fill it? Shouldn’t both local and express buses share dedicated bus lanes, with the only difference in service being the number of stops at which each calls?

Moreover, the side lanes BRT alternatives being proposed in both New York and Chicago will have considerable advantages for customers, as shown in the rendering below. On Webster Avenue, bus-only lanes will run along four miles of the route, and car travel lanes are expected to be eliminated, reducing automobile traffic to one lane per direction. Pedestrian crossings and walking areas are expected to be significantly upgraded. Transit vehicles will be provided signal priority at intersections. Bus stations will be positioned adjacent to sidewalk extensions, making it unnecessary for buses to turn when making a stop. 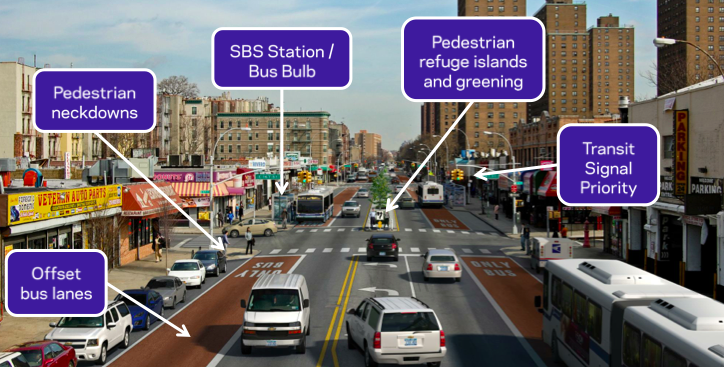 A rendering of the Webster Avenue corridor. Credit: NYC DOT

The New York design does suffer several failings, however, that could be relatively easily resolved. As shown in the plan at the top of this article, the current proposal for Webster Avenue is to stop local buses as is currently done — along the sidewalk, replacing current parking. This makes sense for local-only stops, since a local bus pulled up to the sidewalk would allow an express bus to pass it without moving out of the bus-only lane.

But for stations shared between BRT and local buses, having two separate stops — one along the sidewalk (for the local) and the other next to a bulb-out (for the BRT) — makes little sense. In off-peak periods, when bus headways are 10 minutes or more, smart customers may simply want to take the first bus that shows up, express or local. They shouldn’t have to move to a different place on the sidewalk beforehand, so at shared stops, BRT and local vehicles (neither of which is supposed to be passing the other there) should both open their doors at the sidewalk bulb-out.

Of course, it bears repeating that as the Chicago study demonstrates, placing buses along the edge of the roadway significantly increases travel times compared to median-running buses. Even if buses in the side lanes make the most sense overall, they pose a challenge to actually speeding up riders, which is what BRT is supposed to do.

The advantages of running buses along the outside lanes of the roadway address the problems of places where there are both BRT and local services offered. But along certain routes, one might argue that differentiating express and local services is inappropriate and that the most important goal is to provide the highest quality operations on all routes, not just those designated “BRT.” In Paris, many of the Mobilien “BRT” corridors have relatively frequent stations, but buses are often placed in the median lanes, with stations in the center of the roadway. There are no local or express services, just good-quality buses that hail at many stops but at least don’t get caught up by traffic in between them.

Previously on Next American City: