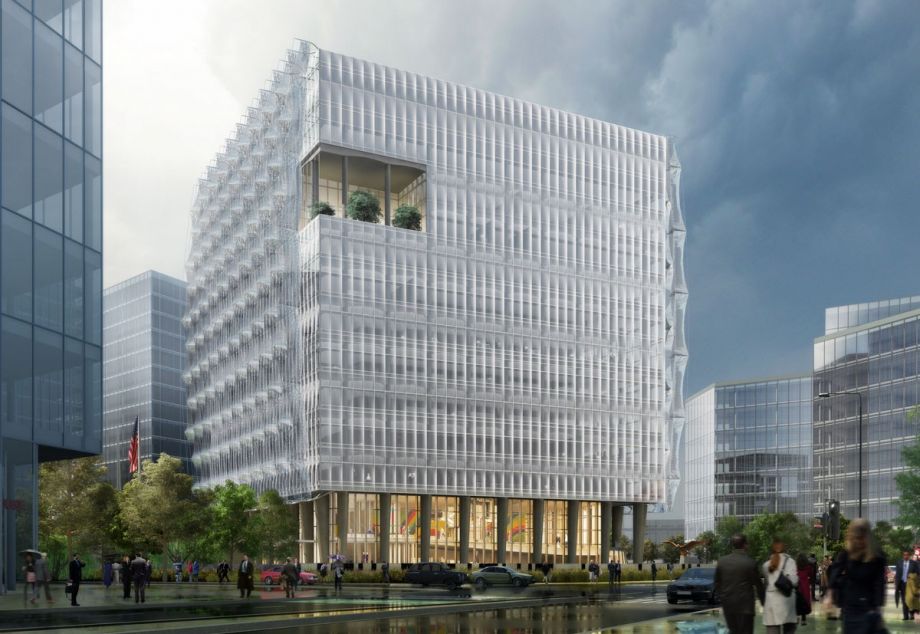 A rendering of the new U.S. embassy in London. © KieranTimberlake/studio amd

Hastily constructed barricades surrounding U.S. government buildings abroad after 9/11 were apt metaphors for the Bush administration’s combative stance toward the rest of the world. Enter Obama and the belief that open-ended warfare and brash unilateralism are fine, as long as they’re accompanied by a spruced-up American image. The sophisticated new embassy in London—which opens its doors in 2017, at least to those with clearance—similarly pins its laurels on cosmetic change. It does away with the ugliness of temporary barriers by experimenting with aesthetically pleasing permanent ones. Anyone scanning the premises will see lush gardens, spiraling uphill walkways and a pond surrounding the futuristic-looking glassy structure (you can see more images here). But the pond is really a mote, the hill is a defensive bulwark, and the transparent façade is a blast-resistant shield. Our government is building a citadel in the middle of London.

The New York Times’s Nicolai Ouroussoff called it “a fascinating study in how architecture can be used as a form of camouflage.” The U.K.‘s Guardian’s Jonathan Glancey likened the design to the American political process, “nominally open to all and yet, in practice, tightly controlled.” International security expert Stephen Walt lamented that “the ‘fortress America’ approach to embassy design presents a public face that is an odd combination of power and paranoia.” To be fair, the project’s designers at Philadelphia-based Kieran Timberlake arguably did what the State Department asked. They made the embassy grounds look tolerable despite absurdly extreme security requirements. Besides, the crystalline cube is just peculiar enough to look at home in a London skyline increasingly dotted with peculiarities like St. Mary’s Axe and the London Eye.

Aesthetics aren’t the real problem. What the embassy projects isn’t the common sense need for temporary security measures, but a permanent state of embattlement. By erecting a billion-dollar fortress (in the middle of London, no less) our government signals to the world a new Cold War that is limited neither in the extremity of its measures nor its duration. The new building institutionalizes the securitization of the embassy grounds by making permanent what should be temporary. It sends the message that the “war on terrorism” and its itinerant threats are a permanent fact of urban life. The State Department is making the virtual garrisoning of its embassy grounds more palatable rather than substantively changing its course altogether, or at least taking measures that could be reversed later.

The only area where the embassy really lives up to its progressive self-image is in its borderline obsessive embrace of cutting-edge environmental technology. The building will be completely carbon neutral and is even designed to prevent bird strikes! These welcome measures nevertheless reduce environmentalism to something governments resort to when it becomes necessary to divert our attention from an unhappy central message. The British public and the U.S. delegation can foster a “green” alliance even as these official grounds cordon off one from the other in a way that the previous embassy did not. In the wake of Beijing’s Olympics we’re learning yet again that it’s possible to be environmentally benign but not socially so, and frankly I don’t think a few high-tech buildings are worth the trade.

The new embassy advances the green theme further by promising publicly accessible park space, which probably won’t add much vibrancy to its Nine Elms home. Kieran’s optimistic press images show Londoners shuffling to and fro around this decidedly single-use building that severely restricts access. Where could they possibly be going in a fairly sparse, isolated part of the city? You don’t need Jane Jacobs’s power of observation to doubt that this heavily guarded government building will be conducive to neighborhood renewal. For what it’s worth, the current Grosvenor Square embassy does a much better job of weaving itself into the city’s urban fabric. It helps that it was built before a federal law that requires new embassies to sit 100 feet off the street. The scuttled idea to renovate that building looks good in retrospect. Better to awkwardly plunk down temporary barricades than to cleverly embed permanent ones.