Putting Filipinos on the Map in San Francisco – Next City

Putting Filipinos on the Map in San Francisco 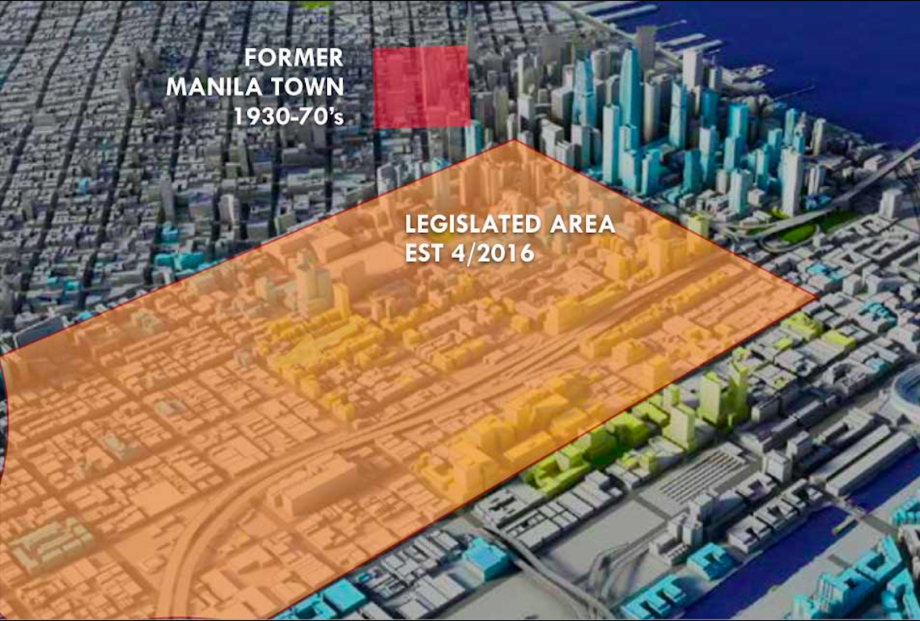 Inay Filipino Kitchen started out as a passion project for Manuel Ramirez III and his late mother, Lydia Lopez Ramirez, from a temporary location in 2010 to its permanent location today, in the heart of San Francisco’s South of Market Neighborhood, or SOMA for short.

“Inay is a word in Filipino culture that sort of refers to a matriarchal figure in a family or community,” says Ramirez, whose mother passed away two years ago. “We wanted to modernize and bring Filipino food to mainstream customers.”

The location was perfect, in more ways than one. It’s inside the Metreon shopping center, surrounded by the buildings of the Moscone convention center, the San Francisco Marriott Marquis, and the Yerba Buena Center for the Arts. On a typical day, Ramirez estimates about 40 percent of their customers are non-Filipino. On days when there’s a convention in town, that percentage goes way up.

It also happened to be in the heart of a neighborhood that, for decades, has been home to a quiet concentration of Filipino immigrants.

“To this day, newly arrived Filipino immigrants still go to this area,” says Vivian Araullo, executive director of the West Bay Pilipino Multi-Service Center, a 45-year-old SOMA-based nonprofit that serves the Filipino-American community in San Francisco and its suburbs.

The reason is history: In the middle of the 20th century, SOMA was more of an industrial area, not a very desirable place to live unless you had few other options. Filipinos moved right in. “So what happened was you have a bunch of Filipino-American families with rent-controlled units, making it affordable for relatives to come to the U.S. and join them in those units, so we have an immigrant population that keeps refreshing,” Araullo explains.

Inay Filipino Kitchen has around 15 staff, six of whom are full time, almost all of whom are of Filipino descent. Nearly all of them live in a 4-block radius from the restaurant, including Ramirez, his wife and their 4-year-old daughter.

The eatery is one of 90 different Filipino-American businesses that have participated in various meetings and discussions to plan the SOMA Pilipinas Cultural District; a final plan is slated for presentation to the city at the end of this month.

Due to the neighborhood’s history as a landing place for new Filipino immigrants and its newfound value as a commercial, residential and cultural destination, in April this year the city of San Francisco unanimously passed the resolution to create SOMA Pilipinas. The resolution tasked a nine-person working group to coordinate with existing community-based organizations and businesses representing the Filipino-American community to come up with a final plan to make the cultural district a reality.

Desi Danganan, a serial entrepreneur who previously launched a Filipino restaurant and now runs a marketing and branding consultancy, has been serving as lead on the economic development side of planning SOMA Pilipinas, specifically tasked to “develop initiatives for the Filipino community to participate in the wealth creation of the Bay Area.”

“The commercial aspect of the district will kind of be the backbone of where things grow from,” Danganan says. “We’re using the arts as a tool to draw attention, but then we want Filipino-American businesses to capitalize on that attention.”

The core of the plan is to invite and support a younger, more entrepreneurial generation of Filipino-Americans to start and grow new businesses based in SOMA. Danganan developed the plan in consultation with Ramirez and other Filipino-American business owners who are located in or are interested in relocating to the neighborhood.

The plan includes support for a co-working space, ongoing pop-up restaurant events, outdoor markets and a formal incubator program that would include support to search for a full brick-and-mortar location and possibly a loan fund.

There is a growing, supportive network for Filipino-American businesses and culture, in the Bay Area. While scouring Kickstarter and other online money-raisers, and just asking around, Danganan found that over the past two years, Bay Area Filipino-Americans have raised at least $250,000 from crowdfunding.

“There are entrepreneurs in our community, in many different sectors from food to fashion to professional services, they just weren’t organizing until now,” says Danganan. “They’re not looking for a cash handout, they just want to get involved, and they see this is bigger than themselves.”

There’s also a large network of potential partners in San Francisco, from existing incubators like La Cocina to small business lenders like Pacific Community Ventures. As with the other subgroup leads, Danganan has been working closely with various city agencies to make sure their plan has their buy-in before presenting everything back to the planning commission and the San Francisco Board of Supervisors.

“Filipinos have been in SOMA for decades, and yet, it seems that not many are aware that there’s this huge population of Filipinos in San Francisco,” Araullo adds. “This is a chance to let people know there are Filipino families that live here, that contribute to the economy here.”