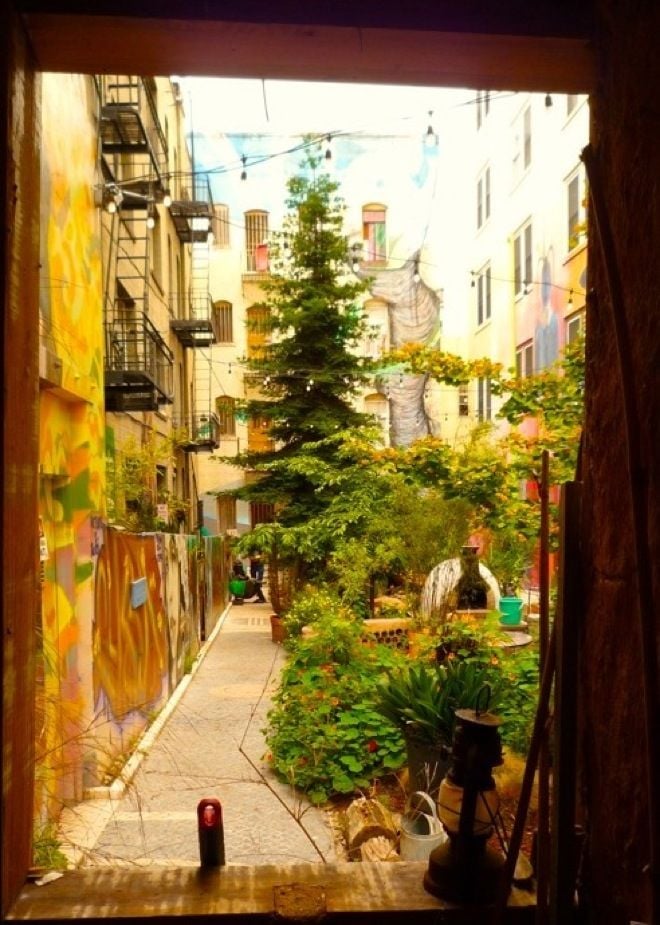 It’s late afternoon in San Francisco’s Tenderloin neighborhood –- one of America’s densest urban areas — and a homeless man is sitting in the shade of a redwood tree. Out on the sidewalk, just one hundred feet away, people yell, smoke and shoot up in broad daylight, but in this narrow alley where the redwood grows, the scene is calm and green.

This is the Tenderloin National Forest. Tucked in the heart of a neighborhood long viewed as a hopeless refuge of the homeless, drug addled and destitute, its transformation over the past two decades has become a groundbreaking experiment in community-based reclamation of public space.

The man largely responsible for this evolution is artist and native San Franciscan, Darryl Smith. He moved into an apartment adjoining the Forest – known then as Cohen Alley — in the late 1980s, and quickly saw that something had to change. While the Tenderloin had by then been San Francisco’s hub of illicit activity for many years, Cohen Alley was a particularly bad scene. Syringes and human feces littered the ground; prostitutes used the spot to turn tricks. For local contractors, it was a convenient, if illegal, dumping ground.

“We saw how the alley was being disrespected,” Smith said of those early years. “It wasn’t a healthy place to be, and we wanted to change that. We wanted physical and environmental safety.” With the help of fellow residents, artists and community activists, he set to work.

His approach over the decades has been consistently two-pronged. In addition to employing more conventional tactics of redefining space– from conducting surveys to lobbying city officials — he has consistently pushed boundaries rebel-style. Back in the 1980s, this meant converting Cohen Alley into a temporary performance space. The pieces of sod he and his friends dragged in to create seating littered the pavement in layers of dirt long before formal plans to change the place into a garden existed.

“We just kept at it,” Smith says when asked how he and his collaborators stayed motivated. By 1997, a decade after Smith began working with Cohen Alley, then-mayor Willie Brown began to pay attention. “Once that happened, a lot of other important factors, like permits, fell into place.”

For longtime residents of the Tenderloin, changes happening in the alley have become an important focal point of community transformation. “People on the street could see, as the years went by, the pavement being broken up, the redwood being put in,” says Smith. People began to stop in to offer their own gardening or construction expertise. “Just because a lot of these folks have been marginalized, have slipped through the cracks of society, doesn’t make their knowledge or experience any less valuable.”

Their collective labor has made the alleyway a publicly accessible sanctuary. Edible landscaping covers much of the space. Asian maples and bamboo stands waft in the breeze, and the ground is patterned in mosaics of rose and cream stone. The vibrant murals that cover surrounding walls, many of which depict longtime Tenderloin residents, have been the work of local artists. A former member of the Forest’s artist residency program built the traditional orno oven that now sits in the middle of the alley.

As with many community-based projects, however, cultivating the Tenderloin community’s involvement has been a slow and often frustrating process. In the early years, it was difficult to open the Forest at all – liability was a major issue and few involved were willing to take responsibility for the space. Even now, nearly a quarter century after work in the alley first began, some residents tend to disrespect it – during my visit a couple living in one of the surrounding apartments made to throw a rotten chest of drawers off their fourth story balcony into the Forest before Smith talked them out of it.

Perhaps the most important lesson to gain from the Forest’s history, however, is the inherent power of the guerilla style Smith has used as a means of transformation. The performance pieces he put on back in the late ‘80s and early ‘90s — done without formal permission — were arguably the most important efforts made to redefine Cohen Alley as a space worthy of respect. The traditional orno was likewise built without the necessary permits; it was, however, built in such a safe and re-moveable way that when a city fireman came by to inquire about it, he walked away impressed.

For Smith, building these projects “is a way of demonstrating the soundness of certain ideas.” To him, a piece like the orno oven is both temporary art installation and development tool. Because it’s executed in a structurally sound manner, it becomes an essential means by which to address the viability of its use and presence in urban spaces.

“We push gently,” Smith explains, “but we keep pushing.”

May they keep pushing for a long time to come.

The Tenderloin National Forest is an ongoing project of the Luggagestore Gallery,co-founded/directed by Laurie Lazer & Darryl Smith