Why It Will Take More Than Light Rail to Fix U.S. Transit – Next City

Why It Will Take More Than Light Rail to Fix U.S. Transit 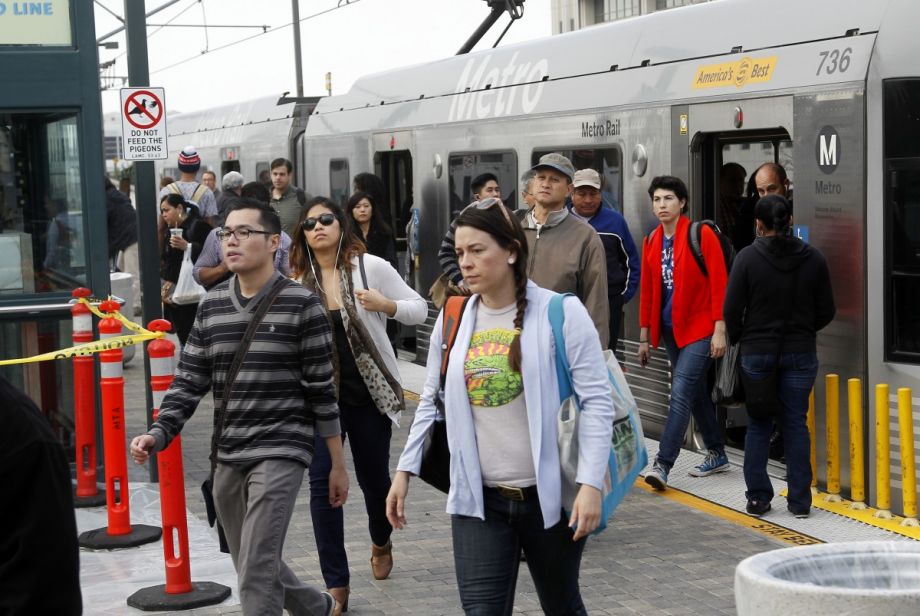 The way we approach transportation in American cities is at a turning point. Since the 1940s, transportation engineers and planners designed transportation networks with seemingly one goal in mind: to move vehicles as quickly as possible. With this guiding principle in mind, slow-moving streets were limited to neighborhoods and commercial districts, faster-moving arterials were built outside them, and enormous highways connected regions together. Driving habits shifted as this infrastructure built up: Americans increasingly drove more, with total vehicle miles traveled (VMT) exploding from half a trillion miles in 1950 to over 3 trillion in 2014. Congestion also became an official enemy of the state, a logistical waste product to be eliminated whenever and wherever possible.

That planning dogma, however, seems to be on its last legs. Communities across the country (from South Carolina to Wisconsin to Colorado) have begun to protest new or expanded highways. On the other end of the spectrum, it feels like every metro area is either designing or actively investing in expanded transit systems. Services like bike-share and ride-hailing are exploding in popularity, reducing demand for private vehicles. Federal and local officials have called for a reconsideration of how well transportation investments promote economic opportunity.

These trends signal a transition away from an outdated model focused on moving vehicles to a new approach focused on getting people where they want to go. In other words, the new goal is to maximize accessibility.

Yet as cities and regions look to design an access-first model, they will need to fundamentally change their approach to transportation, urban planning and related investments.

The process begins by creating clear objectives tailored to each place’s needs. For all the flaws under the post-World War II approach, reducing congestion was a clear governing principle. Now cities and regions need to go back to the drawing board and formalize new objectives. Is it designing denser communities that support shorter distances between places? Is it to improve the amount of regional jobs people can reach in a given timeframe? Is it removing the physical barriers that separate communities? Whatever the objectives might be, each community must define accessibility on its own terms.

Cities and regions will then need new ways to measure progress against those objectives. Decades of refinement led to an elegant system — formally known as Level of Service (LOS) — to evaluate roadway capacity and prioritize expansions. Delivering similarly powerful systems will require a whole new round of investments in data and software, plus brainstorming around new performance measures. This process is already underway in California, where the Office of Planning and Research is developing a performance measure based on vehicle miles traveled (VMT) to evaluate the environmental impacts from future real estate developments.

Maximizing access will also require new frameworks to govern the built environment. Simply put, the current template is woefully outdated. Separate transportation departments, planning agencies, housing authorities and even budget offices can all claim at least some authority in this space. That kind of disparate decision-making just won’t work in communities looking to maximize accessibility. Instead, cross-agency coordination or outright mergers are the only way to holistically consider urban growth and related transportation impacts. Take for example a new transit line that ideally drives up surrounding real estate values. That investment should be done in concert with planners (to up-zone for surrounding density) and budget offices (to implement some form of value capture).

Implementing an access-first approach to transportation can be done, but it won’t be easy. Even with theorists pushing the concept for decades, cities and countries face real hurdles to move these ideas into practice. Formal guidebooks must be revised to reflect updated thinking. Political battles must be waged with actors looking to maintain the status quo, including developers who’ve already invested in land on the urban fringe. Urban planners must address persistent challenges around spatial mismatch, especially as it affects low-income households and their accessibility needs. Finally, regions will need to decide how to balance broadly shared economic benefits against fiscal realities, whether that’s upfront capital or long-term maintenance.

Yet even with these challenges, we feel confident change is coming. Formal transportation plans out of Seattle and Los Angeles offer best practices for cities looking to innovate. Federal budget proposals have also started a new conversation inside the Beltway. And most importantly, the American public has demonstrated an appetite for new ways to build our communities.

With continued hard work across the country, the accessibility era is just around the corner.

Adie Tomer is a fellow at the Brookings Institution’s Metropolitan Policy Program, and Jeffrey Gutman is a senior fellow at the Brookings Institution’s Global Economy and Development Program. They co-direct the Moving to Access Initiative, which aims to inform and promote a more socially focused, access-first approach to urban transportation policy, planning, investment and services.