Millennials Not Alone in Wanting Right to Protest in Public Space 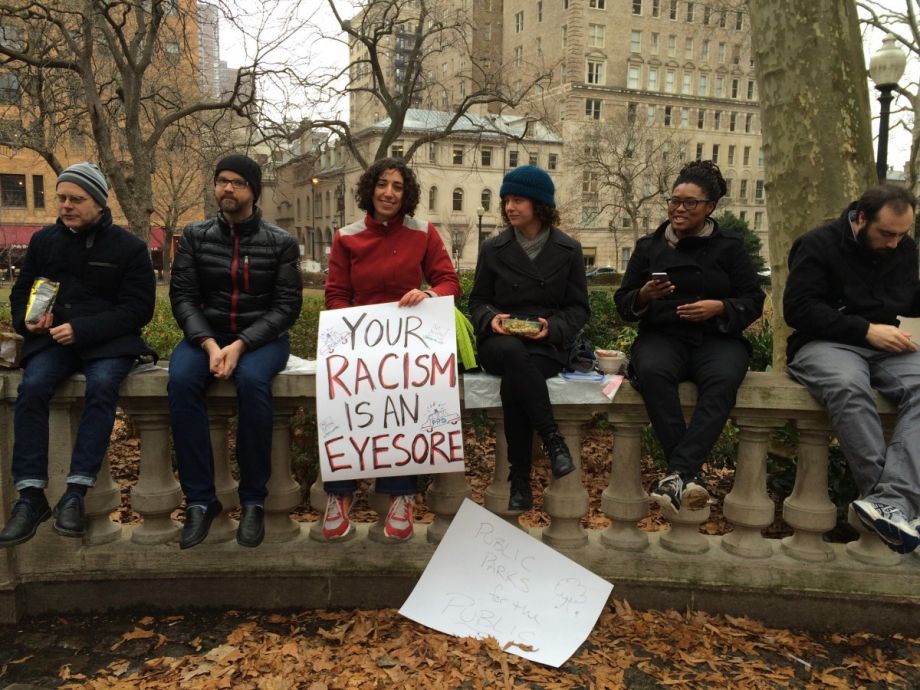 Philadelphians protested the idea of a ban on sitting on the stone walls of a popular city park. (Photo by Jen Kinney)

In February, the Washington Post reported that Republican lawmakers in at least 18 U.S. states had introduced bills to curb protesting. But a new survey by the National Recreation and Park Association suggests that a majority of Americans still support the right to gather peacefully in public spaces like parks and town squares.

NRPA asked 1,000 U.S. residents ages 18 and over whether the right to assemble peacefully in public was important to them. Nine out of 10 (88 percent) answered affirmatively, but certain groups were more enthusiastic. Ninety-one percent of millennials, 91 percent of Gen Xers and 94 percent of parents said they supported the right.

NRPA emphasized in a press release accompanying the survey that it supports peaceful assembly, and alluded to unspecified gatherings that have recently “turned violent.”

“Our right to peacefully assemble in public parks should never be taken away,” NRPA President and CEO Barbara Tulipane said in the release. “However, this does not give people the right to use our parks to incite hate and violence. Hatred has no place in our nation’s parks.”

Unfortunately, public spaces are not always as public as they seem. Even spaces that are unabashedly public (in front of a state capitol, for example) are often policed. Required permits can serve to quiet voices too, as Mariah Williams’ August Next City op-ed, “Cities Should Celebrate, Not Suppress, Black Joy in Public Spaces,” explored:

That fact could disproportionally impact peaceful gatherings of people of color, in particular.

Protesters often have to parse a network of opaque regulations, Jen Kinney wrote for Next City in January. In instructing would-be Inauguration Day protesters, she wrote that D.C. is “a maze of different types of property with different legal statuses — local, federal, embassies, consulates, etc. — and will be patrolled on Inauguration Day by no fewer than three dozen different law enforcement agencies, including Metro police, Secret Service, National Guard, and police officers from 50 to 70 agencies from across the country.”

In another Next City op-ed last November, “Design Public Spaces Where Americans Can Speak and Listen​,” Gehl’s Jeff Risom explained how well-planned public space could improve civic engagement in U.S. cities. “As designers and planners, our challenge is to understand how physical space invites for positive, constructive, in-person contact,” Risom wrote. “This challenge is made all the more acute because of the physical sorting that has occurred in U.S. residential patterns during the last 50 years. In other words, we literally need places where all of America’s diverse population has a chance to show up.”

According to the NRPA poll, the demand is clearly there.