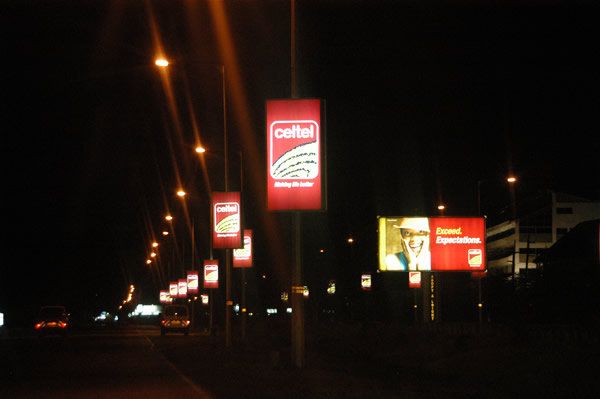 A streetlight campaign in Nairobi Adopt a Light

In her 2000 book No Logo, journalist and activist Naomi Klein warned of an increasing corporate encroachment on public space. These “pseudo public spaces,” she said in a 2004 interview with PBS, sell products in such a way that creates in consumers a “sense of belonging.” In other words, Starbucks markets its $5 lattes so that consumers feel as though buying them will also buy access to community. For most of human history, says Klein, such “third place” public spaces were free of advertisements – think of libraries and town squares, anything that’s neither home nor work – and didn’t cost citizens a dime. Increasingly, she argues, these spaces, so fundamental to democracy, are private, costly, and branded.

Klein, of course, has a point, particularly regarding large-scale corporate investment. (Full disclosure: I wrote about this same phenomenon in 2007, when Donald Trump erected Trump advertisements at Jones Beach, the first in its 80-year history.) But do her criticisms apply equally to private investment in public space in the developing world?

Take Nairobi’s Adopt a Light Limited program, founded in 2002. The company partners with the City Council of Nairobi to sell advertising space on streetlamps on public roads. Companies can “adopt” highway, street and slum lights; traditional billboard space is also available. In return for advertising, firms must maintain the lamps, which the Kenyan government evidently does not have the funds to do. Local firms as well as such large-scale multinationals as AIG, Colgate, and LG have sponsored light posts. Adopt a Light Limited has won numerous awards for its business model, including the 2009 UN Habitat Business Award, which rewards organizations for best practices regarding sustainable infrastructure, affordable housing and the like.

On the one hand, the immediate results of Adopt a Light are better-lit roads, which enhance safety for all residents, and women and more-vulnerable people in particular. Proper lighting also means that Nairobi’s citizens –an estimated 4 million of whom live in slums – are more willing to walk once-darkened corridors, whether to visit friends and family or to shop. A 2006 study by the Steadman Group, a market-research firm now owned by the London-based Synovate, showed that people who lived in the newly-lit areas were also more likely to report fewer personal experiences with crime – including mugging, sexual harassment, and robbery – and also perceived that the occurrence of those crimes had decreased.

But because these roads are definitively public – even destinations unto themselves, as the Project for Public Spaces maintains – such heavy advertising might also seem an uncomfortable compromise. (The Kenyan signs are much larger, more numerous, and attention-grabbing than the U.S.’s “adopt a highway” signage.) And that same Steadman study regarding public safety also measured brand awareness and savings habits. One if its chief findings? “There is household disposable income in these areas for the purchase of household commodities and brands.”

Synovate’s press release about its acquisition of Steadman reveals the import of such market research: “Africa is one of the fastest growing research markets in the world,” said Synovate Global CEO Adrian Chedore. Take away the word “research” and the statement is equally true; Kenya is often named along with the BRIC (Brazil, Russia, India, and China) countries as a key emerging market.

These signs may not be selling community as Klein defines it – yet. But they do pose questions about the objectives of Adopt a Light Limited and companies like it. Is Adopt a Light a model of social entrepreneurship? Does it merely represent government’s increasing reliance on private companies to maintain public infrastructure, from toll roads to water delivery? Or, given Kenya’s burgeoning middle class, is it symptomatic of savvy corporate hopes to seize on as-yet untapped markets?