What Does 21st-Century Public Housing Look Like? – Next City 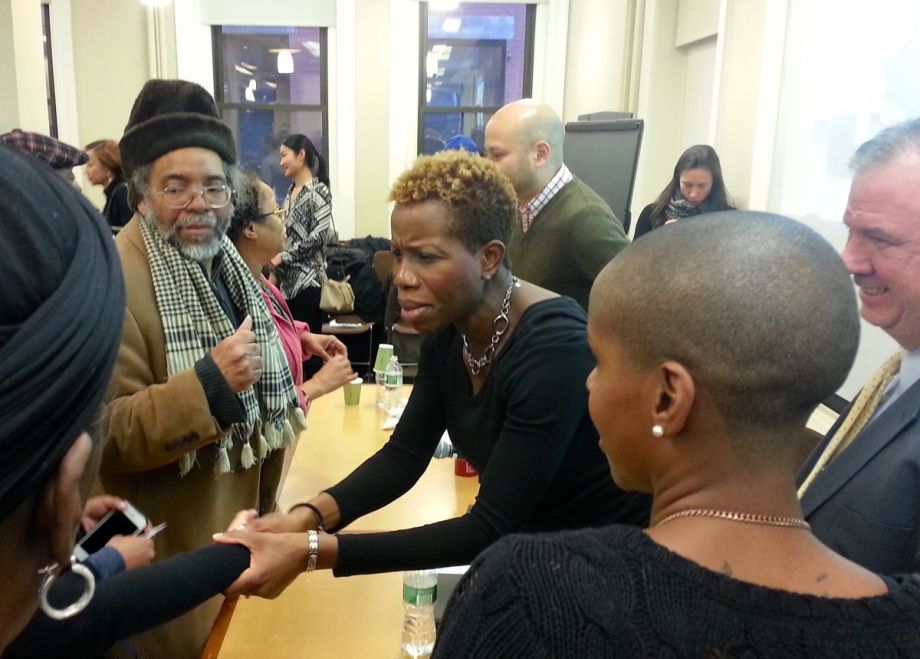 Shola Olatoye thinks of the New York City Housing Authority as a “mighty beast.” Her goal is to subdue — and guide — the behemoth agency, and Olatoye, who was appointed NYCHA chair and CEO nearly a year ago by Mayor Bill de Blasio, has a plan to do just that.

On Saturday (where she made that “beast” comment), Olatoye got into the details of the simply named “NextGeneration NYCHA Plan” at a forum for housing advocates and resident leaders, giving a preview of her game plan for managing the housing authority under de Blasio. I was there, and I found Olatoye forthright. She’s clearly unconcerned about concealing NYCHA’s failings. Instead, she seems more focused on improving its reputation not just to the outside world, but the agency’s tenants and resident leadership — a hard sell based on the repair and safety concerns voiced by the forum’s attendees.

Here are some of the takeaways from Olatoye’s presentation.

Get NYCHA’s Finances in Order

NYCHA is facing a capital shortfall of nearly $18 billion.

With Republican control of the N.Y. State Senate and the U.S. Congress putting public housing funding on shakier ground (more so than it already is), Olatoye is looking at alternative options for bringing in money and cutting costs.

For one, she wants to improve NYCHA’s 75 percent rent collection rate. Olatoye acknowledged that some tenants choose to withhold rent payments because of major repair needs in their apartments. NYCHA’s maintenance and upkeep issues are well documented. “But the connection between paying rent and the services we are able to provide are linked,” she said. “We have to operate as an efficient landlord. The notion that NYCHA is different than any other landlord, I submit to you, is an excuse for poor and shoddy management practices.”

Olatoye said they are also looking to decrease or eliminate what the authority pays to the city: “I ordered a review of every single agreement that we have with various city agencies. It’s fascinating what you can learn when you actually read the documents.”

In 2014, de Blasio redirected money to NYCHA, which had been earmarked to pay the NYPD for “above baseline” policing services. The housing authority also pays $29 million in PILOT payments, which Olatoye alluded to trying to cut or eliminate.

At Saturday’s forum and in other discussions of the NextGeneration plan, Olatoye has mentioned her aim to create a 501c3 nonprofit to raise money for social services, like workforce development programs, corporate sponsorships and energy retrofits. “This is a way for us to leverage and take advantage of other people’s money,” she said. Similar to the Central Park Conservancy or the Mayor’s Fund to Advance New York City, there are already such models at work at housing authorities in Philadelphia, San Francisco and St. Louis.

Olatoye was frank about how NYCHA doesn’t always meet the needs of its tenants, or follow its own rules. Optimal Property Management Operating Model, a pilot program that kicked off January 1st, attempts to improve resident engagement by decentralizing management. Participating property managers will be held accountable for standardized performance metrics and regularly meet with resident leadership.

Acknowledging NYCHA’s “culture is difficult to change,” Olatoye said that the pilot’s outcomes would be measured and guide how it is expanded.

On the theme of transparency, many in the crowd called for NYCHA to release its data sets related to things like complaints, salaries and procurement. As a public-benefit corporation, the housing authority is treated differently than other city agencies. It seems to be murky whether they have to comply with the city’s 2012 Open Data Law. (As the Next City feature “Welcome to the Open Data Movement’s Turbulent Teenage Years” details, New York isn’t the only place grappling with the transparent government trend.)

More Privatization Deals on the Table?

When NYCHA sold half its stake in 900 apartments to private developers in December, many were surprised by the swiftness of the deal and the lack of community input about the terms of the sale. Olatoye said that the sale was the primary reason the housing authority was able to balance its budget for 2014. Whether NYCHA plans to pursue similar partnerships and how this might affect New York’s public housing stock moving forward remains an open question.

U.S. Rep. Nydia Velázquez was also on hand Saturday, and she warned that while creative financing through sales or partnerships with private developers is well-intentioned, it is the “privatization of an asset that should be publicly owned.”

Velázquez noted that HUD’s Moving to Work and RAD projects are being actively pursued at other housing authorities across the country. She does not want NYCHA to follow suit.

Olatoye said there were “no immediate plans” for NYCHA to pursue the Moving to Work program, and it was unclear whether there might be other plans to sell stakes in some developments or convert more housing to Section 8 (which is more attractive to developers).

NYCHA has already begun to make strides to house homeless families, as directed by de Blasio (although the implementation has been controversial itself).

The Mayor was opposed to the private development infill plan proposed under Mayor Bloomberg, but has left open the possibility of an amended solution. Olatoye says that NextGeneration NYCHA will include plans to leverage its real estate assets in the form of a land lease initiative.

Above all, Olatoye framed a future of NYCHA that’s less based on triage and more on calculated planning. “Our capital planning process is one that’s driven by the most need,” she said. “The challenge is that everyone is in need. Where we want to get to is a place in the process where we are actually being much more strategic about how we plan. And do that in a way that not only takes into account where a roof is caving in tomorrow, but about what the operating issues are happening at the development.”