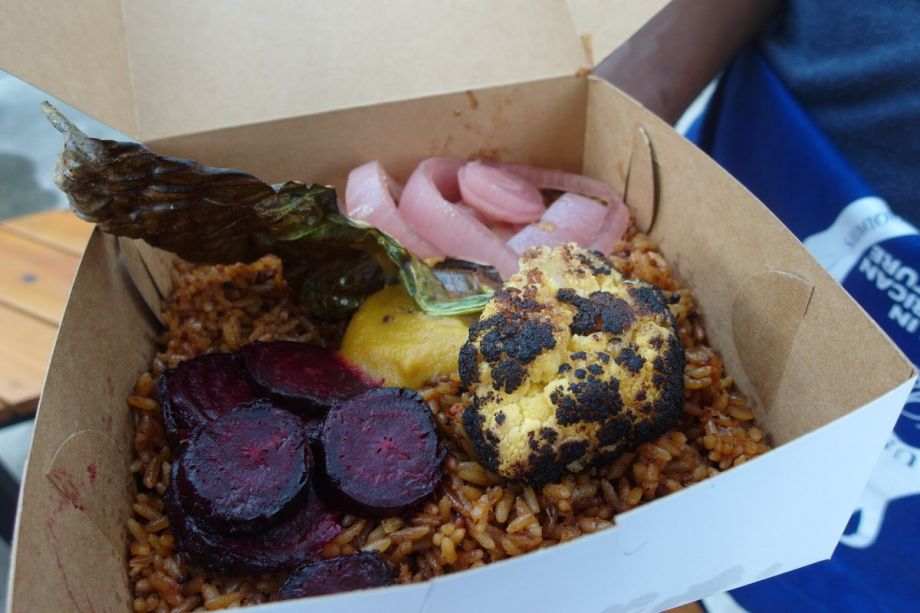 It starts with ordering a plate of Nigerian cuisine from a lunch counter. Chef Tunde Wey opens by explaining wealth disparity in the United States.

Then Wey goes in for the ask. He shows me a box of his Nigerian jollof rice with oven-roasted plantains, blackened cauliflower, golden beets and coconut sauce, pickled onions and toasted collard greens. “It’s $12 for a plate,” he says. “You can look at the menu, it’s been asterisked because we’re asking white folks to pay a suggested price of $30, which is two and a half times more.”

While only a month-long pop-up shop at New Orleans’ Roux Carré Food Accelerator, the concept captured a national response, with headlines ranging from praise to outrage. “One chef’s social experiment: Charge minorities $12, white people $30,” the Washington Post; “Could a Single Lunch Change Your Views on Race and Wealth?” asked U.S. News & World Report; “Racist Restaurant Charges Whites More For Same Meal Than Non-Whites” from The Hayride, a right-leaning website.

Wey explains that it’s up to guests whether they identify as white. It’s also up to the guest whether they want to pay the higher price.

One guest, for example, told the chef she identifies as a person of color (though she acknowledged she passed as white) because she is the daughter of Iranian immigrants and is of Muslim faith. On another occasion, after going over his presentation and explaining to a white customer that the $30 was only a suggested price not a requirement, the guest stormed off without purchasing anything.

It’s not the first time Wey has invited his guests to have some hard conversations over a meal. He made a name for himself with his “Blackness in America” dinners in 2016, which spanned from rural Appalachia to Los Angeles. One of Wey’s collaborators on that series was Caleb Zigas, executive director of La Cocina, a food business incubator focusing on women and immigrant entrepreneurs in San Francisco’s Mission District. Zigas says he’s heard criticism of Wey’s work in the past, that his meals aren’t exactly garnering answers to income or wealth inequality. In the space of an artist, that’s not really the point though, he says.

“I encourage [Tunde] to approach this work as less of a business venture and more as art,” says Zigas. “There’s not enough margin in a business for this type of work, but it’s possible in a less profit-sensitive format to have these important conversations.”

At Roux Carré, Wey wanted to take the conversations further, by asking guests not just to think about the many inequities that keep marginalized communities from building wealth, but also to give up something tangible. He dubbed the month-long pop-up “Saartj,” referring to Sara “Saartjie” Baartman, a 19th-century black South African woman who was taken from her home and paraded around Europe.

The experiment went beyond asking white guests to pay extra. Going over the same information about income and wealth disparities, he offered guests of color a cut of the extra profit gained from the white customers. The reaction to this offer was also mixed. When Wey asked a black guest, who visited with his white wife and biracial daughter, if he wanted money back, the guest kind of shrugged at first.

“Do you want cash back?” asked the chef.

“Um, sure?” the stunned guest replied.

“Why do you want cash back?” said Wey.

To which the guest replied, “I mean, who don’t want a little money thrown their way?”

Asked if his interest in getting money in return had anything to do with the fact that it would be coming from white customers as a form of wealth redistribution, the guest said no, not necessarily.

All guests were also asked a set of questions, put together with the help of a student from Tulane University, which sought to understand any advantages they’ve had growing up. Did your family pay for college? Did your folks buy you a new car? Are you better or worse off financially than your parents were at your age? How have these advantages helped you succeed in life?

Now that the pop-up has completed, the data was compiled and the findings were shared at a March 15 town hall meeting hosted by Propeller, a New Orleans nonprofit that helps entrepreneurs with projects that address social and environmental disparities.

Of the roughly 65 guests who dined at Saartj in February, about half were white. Of white guests, 78 percent chose to pay the $30 ticket. The rest identified as black (about 28), Hispanic (2-3) and other (one). About 19 percent of guests of color accepted money back.

White women were far more likely (91 percent) to pay the $30 than white men (55 percent). The findings also showed that age, employment status, annual household income or how individuals were doing compared to their parents correlated with whether a white guest decided to pay more or not.

“We’re often working very much with imbalanced opportunities,” says Hermione Malone, whose organization, Good Work Networks, owns and runs Roux Carré. “You can see how this sort of wealth imbalance shows itself in different ways. .. .Most people when they’re starting a business will be get the help of friends and family because most banks right off the bat won’t even consider you.”