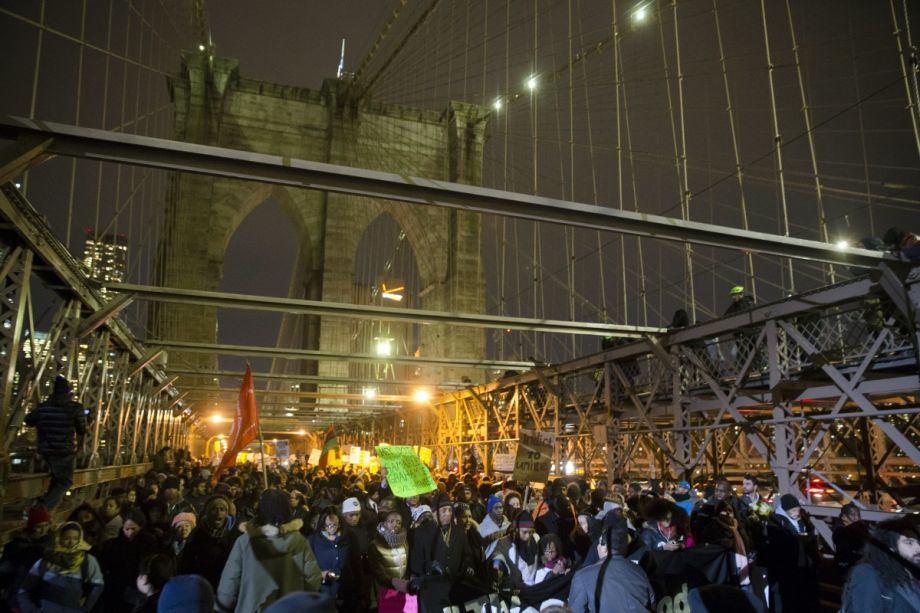 Demonstrators march across the Brooklyn Bridge on Dec. 4th to protest a grand jury’s decision not to indict the police officer involved in the death of Eric Garner. (AP Photo/John Minchillo)

Chants echoing in a grandiose train station during the evening commute. A rally in a 150-year-old public square. A human chain that reroutes highway traffic. These are all acts of protest that transform public spaces, and in recent weeks, thanks to the grand jury decisions in St. Louis and New York, city-dwellers across the U.S. have seen, or participated in, these common protest tactics first-hand. Demonstrations are woven through U.S. history, and technological advancements and growing populations are inevitably impacting how we disrupt. Here’s a look at six common techniques and how they play out in cities.

Potency: Solidarity is the name of the game when it comes to marches and rallies. There is undeniable power when thousands or hundreds of thousands of humans march side by side, which is why these types of demonstrations prevail. Public spaces and large avenues or boulevards have historically been the “venue,” creating an emotional connectivity between current events and movements from past eras.

Demonstrators surround a car on Memorial Shoreway in Cleveland on Nov. 25th, in a protest over the police shooting of Tamir Rice. (AP Photo/Mark Duncan)

Potency: One of the flaws of marches and rallies is that participants risk preaching to the choir. But by blocking highways, bridges or tunnels, activists are a disruptive critical mass that attracts the attention of people who might be unaware of a cause or are choosing to ignore it.

Potency: Street art is more lasting than other forms of protest — and can even have the more notable effect of beautifying neighborhoods.

Protesters in Johannesburg on May 8th (AP Photo/Ben Curtis)

Potency: Digital spaces bleed into physical spaces every which way you look, but the creation of a hashtag like #ShutItDown — which called protesters to crash the annual Christmas tree lighting ceremony in New York’s Rockefeller Center this week — can have a profound and instant effect on space.

Potency: Urban insurrections have many different causes and vary from place to place and event to event, but acts like looting and rioting often stem from frustration with material conditions, as seen in Ferguson, and also in Mexico City (though corruption and abuse of power are the primary causes there). While riots act as a venting mechanism and get a lot of media coverage, critics often point out that it’s often negative attention.