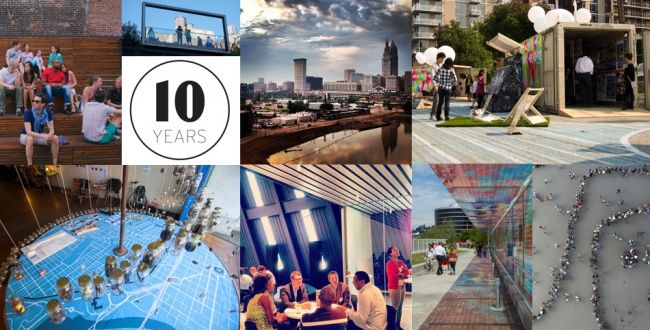 On November 15, Next City will celebrate its 10-year anniversary with a special event at Joe’s Pub in New York City. (If you haven’t yet booked a table, space is still available.) Rather than go the typical route and fill the night with congratulatory speeches, we decided to focus the party on seven urban leaders, hailing from a number of different cities and professional fields, and have them share their stories of living and working in places like New York, Detroit and Philadelphia.

Here’s a quick glimpse at our storytellers:

Tony Barlow likes Detroit. Something of a Ford aficionado, he co-created Bold Moves, a documentary about the Motor City-based company’s early days, and now works for Team Detroit, the ad agency that represents its 2013 face. In 2009, Barlow wrote a New York Times op-ed in which he told the tale of Detroit’s $100 houses and promoted the benefits of living in a city “where anything imaginable can be accomplished.” Barlow is also the author of Sharp Teeth, an epic poem, and Baba Yaga, a novel about witches in Paris.

One of Next City’s favorite women in urbanism, Majora Carter is well known for her role in the South Bronx, where she advocates for everything from environmental literacy to community engagement to economic development in New York City’s poorest borough. Among other achievements, she founded the environmental justice non-profit Sustainable South Bronx and co-founded the incubator StartUpBox.SouthBronx. A 2006 MacArthur Genius Grant recipient, Carter’s work remains grounded in the communities she serves.

Adam Gordon co-founded Next City in 2003 in what the New York Times called “a subtle plan to change the world.” So yeah, he’s pretty special to us. Since leaving the organization in 2006, Gordon has worked at the Fair Share Housing Center in New Jersey. Now a staff attorney, Gordon has focused on inclusive housing policies for low-income residents. You may have noticed his recent appearance on MSNBC’s All in with Chris Hayes, during which he criticized Gov. Chris Christie’s management of reconstruction after Hurricane Sandy.

Dekonti Mends-Cole is a member of Next City’s 2013 Vanguard class and a current Sustainable Communities, Sustainable Cities fellow based in Detroit. With the federal SC2 Detroit program, Mends-Cole is working to restructure the Detroit Law Department and refine the ordinances that control demolition and blight in the bankrupt city. She has also worked on economic development projects with the UN Africa and the Middle East.

Choire Sicha is the writer behind Very Recent History, An Entirely Factual Account of a Year (c. AD 2009) in a Large City, which the New York Times called “an uncanny, absurdist reduction” and “the anti-blog.” Despite the oppressive amount of debt discussed the book, Sicha has never owned a credit card or been in debt himself. Sicha is the twice former editor of Gawker and co-founder of The Awl, the blog whose recent entries include “The Way We Shit Now” and “Even The Font Usage On the Crowd-Sourced Artisan Hipster Trading Boat Will Annoy You.” He lived in Florida once for two years but prefers New York.

The newly minted president of the Ford Foundation, Darren Walker was also Next City’s first funder. But beyond helping us out early on, his leadership in the non-profit and philanthropic sectors is well known. As chief operating officer of the Abyssinian Development Corporation in Harlem, he was instrumental in passing extensive low-income housing initiatives and helped bring a much-needed supermarket to the neighborhood. As vice president for foundation initiatives at the Rockefeller Foundation, he led the recovery program after Hurricane Karina. He has also served on the board of several other foundations, including the New York City Ballet.

Architects Tod Williams and Billie Tsien are famous for their designs of museums, schools and non-profits. The husband-and-wife duo has earned numerous awards, including more than a dozen from the American Institute of Architects. Recently, they were behind the Barnes Foundation’s new residence in Philadelphia, a building that both reimagines the collection’s previous home while keeping the former layout intact. A book on their work for the Barnes was published in 2012.