Raising a Giant Foam Finger for Urbanism – Next City 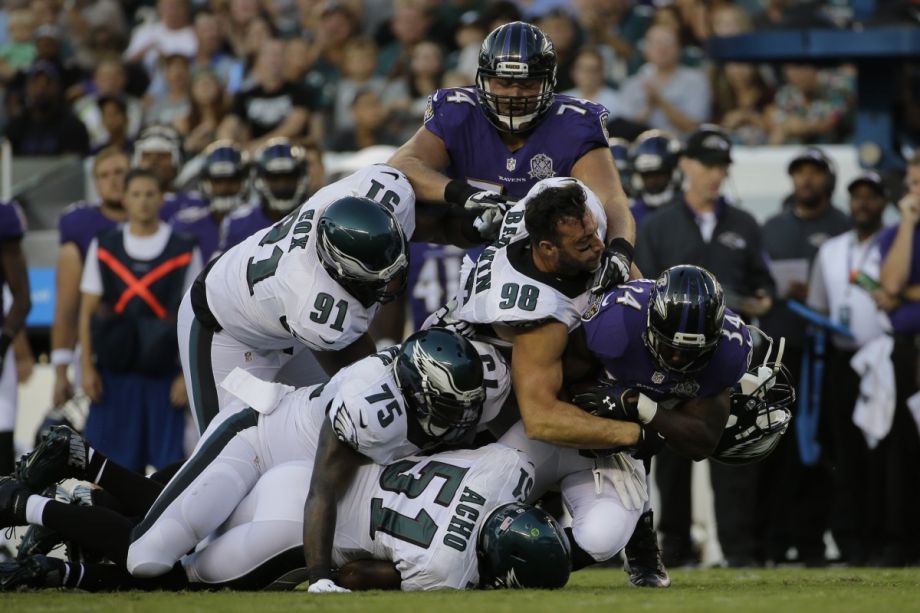 In a sports-crazy city, someone asked that question this week. Not only that, he put it to two athletes: NBA legend Charles Barkley and NFL Pro Bowler Connor Barwin.

The inquisitor, Larry Platt, who’s editor of nonprofit news site Philadelphia Citizen, talked civics with the two in front of a Philadelphia crowd at an event whose basic theme was “What can athletes do for their cities?” (Barkley played for the 76ers in the ’80s. Barwin is currently a linebacker for the Eagles.)

Both Barwin and Barkley began by speaking more about their own community efforts than taking that question head on. Barwin has a foundation that rehabbed a South Philadelphia park last year, and is currently working on renovating a second one. Barkley is a noted philanthropist; in June, for instance, he donated a total $3 million to Morehouse, Auburn and the Wounded Warrior Project, a veterans’ charity.

While Platt pointed out that only 27 percent of registered voters cast ballots in Philadelphia’s May primary (an election that pretty much decided the city’s next mayor), neither Barwin nor Barkley claimed to have solutions for waning voter turnout.

But they were frank.

When Platt touched on widespread apathy, both said they understood where it came from: a sense that one’s vote won’t actually change things. When a Temple University student asked about what universities should do to instill a sense of local responsibility in students, Barkley replied, “I think it’s very difficult for universities trying to get students educated [to then say], ‘Hey, can I do something with your spare time?’ I don’t think there’s a right or wrong answer.” Later he added, “I think in college you should have fun. You have to work for the next 30 or 40 years.”

This bluntness is, of course, characteristic of Barkley. In a generation of NBA players who preferred reticence over potential controversy, he rarely seemed to hold back.

“Poor people are told all they have to do is work hard, which is crap, might I add,” he told the audience. He explained that he’s focused much of his charity work on education, observing, “One thing that’s sad, public school used to be [meritocratic like sports] until they built good schools in the suburbs and they built the charter schools, and the economics came in. Ruined the public school system.”

Barkley and Barwin agreed on most points: Philadelphia is a wonderful place to live; athletes should absolutely endeavor to change their communities for the better if they can; having more discussions on urban issues can only be a good thing. (Ed Rendell, a former Pennsylvania governor and an ex-Philadelphia mayor, spoke to the latter after the talk ended: “I don’t think [the love of sports] necessarily needs to be grafted, but it certainly helps,” he told me. “If you can get figures that people look to and love to hear talking about civic engagement, they’re going to get a better audience than just the ordinary person.”)

We can safely call Barwin, the transit-and-bike-riding linebacker, an urbanist. (Have you seen him quoting Jane Jacobs’ Dark Age Ahead on ESPN?) His father also happens to be the city manager of Sarasota. If he were mayor, he said when prodded, he’d try to fix the city’s trash problem.

Sports has informed his work in South Philadelphia, he noted. “In football, we’re from all the over the country, all sizes and shapes,” he said. “You understand that it’s okay if you don’t agree about everything … . In the locker room, we’re lucky to have that kind of safe environment.” There are basic lessons about respect and teamwork that he connected to civics. “It’s not you that’s doing all the work, it’s the whole sum of everybody,” he stated.

Urbanism as a team sport. Hmm. I later asked Barwin what else cities could learn. He said that local pride could be more competitive.

Barwin announced that he’ll be helming a weekly column for the Citizen website that’ll measure Philadelphia’s policies and attributes against that of their opponent’s city post-game. He shared that he’ll be looking at data on cycling, poverty and green water infrastructure, but plans to mix it up.

Are you ready, Atlanta?