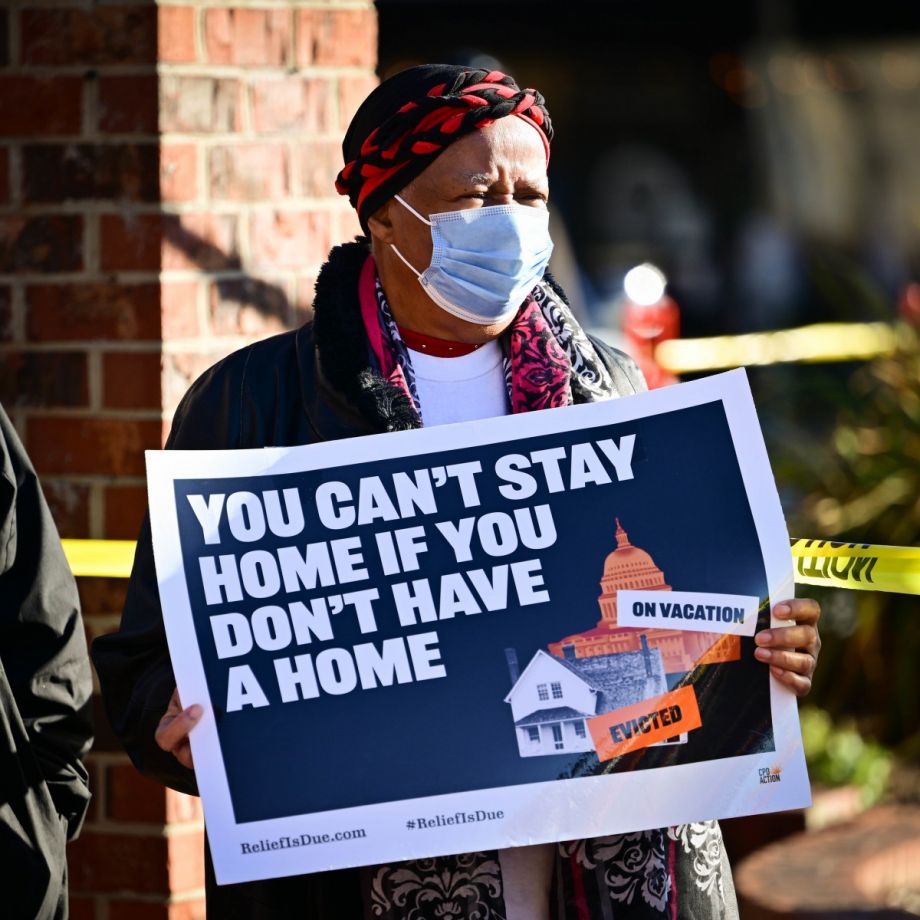 A January 2021 rent relief protest in North Carolina (Photo by Anthony Crider/CC BY 2.0)

Policies that have curbed evictions have slowed the spread of COVID-19 in cities, a new study shows.

Per the study, published in Nature Communications, and the accompanying press release from Penn Medicine, a city of 1 million people in which 1 percent of households are evicted monthly would see 49,000 more COVID-19 infections than a city with no evictions. The researchers — at the Perelman School of Medicine at the University of Pennsylvania, Johns Hopkins University, and the University of Illinois at Urbana-Champaign — used a model to predict how the pandemic would spread if evictions were left unchecked.

“Our model shows clearly that policies to stem evictions are not only a warranted, but a necessary component of COVID control. As long as the virus is circulating, ending these protections could have devastating implications in the United States,” said co-senior author Michael Z. Levy, Ph.D., in a statement.

The extra infections come, according to the model, from what happens after families are evicted — data shows that families tend to “double up,” moving in with friends and family, which increases the risk of the virus spreading within a household.

The study authors then focused specifically on Philadelphia, which has, according to the national database the Eviction Lab, a normal eviction rate of 3.5 percent. That rate wouldn’t cause an enormous number of extra COVID cases, the researchers said, but warned that experts expect that when evictions eventually do resume, they will be much higher than “normal.” With a five-fold increase in evictions, which the researchers believe is probable, Philly would see 53,000 more infections.

“These simulations show that a change that seemingly only affects a small proportion of the population can have a great impact across interconnected communities,” Levy said. “Evictions not only affect the evicted, but they can endanger an entire city.”

New research quantifies how much an increase in income inequality leads to increased homelessness.

In the study, titled “A Rising Tide Drowns Unstable Boats,” researchers examined more than 200 communities and calculated how their Gini scores — a widely used measure of income inequality — changed over time. They discovered that, for an average-sized community of 740,000 people, a 1-point rise in Gini score would lead to 562 people experiencing homelessness.

The mechanisms that drive the increase in people experiencing homelessness are familiar: housing prices increase as high-income workers move in and as supply cannot keep up with demand.

One thing that would make a huge difference, according to the study’s lead author Thomas Byrne, speaking to Journalist’s Resource: make Section 8 housing vouchers available to everyone who qualifies. The Biden administration recently asked to increase HUD’s budget to create another 200,000 vouchers, a far cry from the millions needed, but a move advocates say is a step in the right direction.

The study was published in The Annals of the American Academy of Political and Social Science.

The proposal is “largely unchanged,” the Times said, from its original iteration in 2019, but the political landscape is much different.

“The time has now caught up to the legislation, and I’m really thrilled about that,” Ocasio-Cortez told the Times.

As Next City reported at the time, the proposal includes retrofitting every public housing unit in the country to be zero-emissions. It would require projects to adhere to strong labor standards and provide job opportunities for public housing residents, veterans and returning citizens. And it would repeal the Faircloth Amendment, which has hampered the new construction of public housing for decades (but isn’t the only obstacle to building new housing).