Why Is Obama So Obsessed With Bridges? – Next City

Why Is Obama So Obsessed With Bridges? 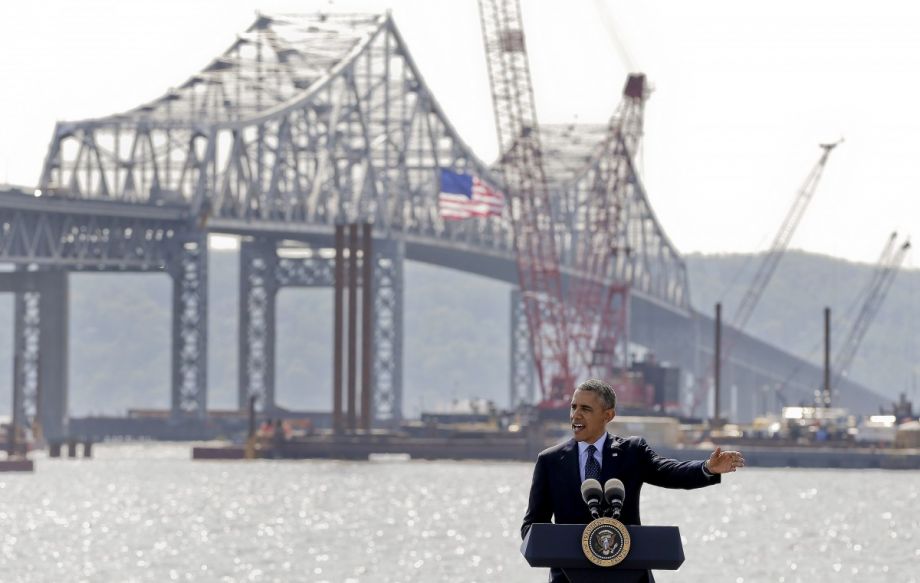 President Obama’s infrastructure announcements last week followed an odd but consistent pattern: The guy loves to address the American people from under a bridge. On July 17th, it was I-495 in Delaware. Earlier this month, it was Key Bridge in Washington, D.C; in 2011, the Brent Spence Bridge between Ohio and Kentucky. Bridge-speaking is a favorite of the President’s across campaigns; while he’s pushing a transportation plan now, he’s spoken from the Key and Brent Spence bridges before on issues of job creation and Congressional deadlock.

You don’t have to be a fan of HBO’s Veep to understand that each backdrop was meticulously selected to correspond with the President’s address. Each bridge, to quote the ever-calculating Selina Meyer, provides a solid narrative. Here’s a thematic breakdown of the structures — and their significance to Team Obama.

Crossing the Christina River in Wilmington, Delaware, this I-495 bridge has been closed for repairs for nearly two months, making it the perfect setting for Obama to announce his Build America Investment Initiative. Calling it a “one-stop shop” between private investors and local governments with infrastructure needs, the President is selling his plan as an alternative to Congressional inaction. The concrete bridge behind him, closed since its columns shifted and tipped, was an arresting visual (especially topped with a crane flying an American flag) and metaphor for crumbling throughways everywhere.

“Behind me is one of the busiest bridges in Washington,” Obama began his address on the Highway Trust Fund, and the Key’s location — adjacent to Capitol City — was important to his speech. The Fund finances state infrastructure; it’s slated to run out in August, and the House hadn’t then agreed to refund it. Citing the structure’s fractures and corrosions, the President joked that even members of Congress had to cross the bridge, crafting an image of a House so ineffective it couldn’t even fix its own commute lanes.

As the first of his 2014 infrastructure speeches, Obama’s Tarrytown appearance lauded a job done well. The “longest bridge in New York” is in the process of being replaced. Backed by cranes dwarfing metal peaks, Obama said you could once see the river through the old bridge’s cracks and added that 100,000 bridges around the country could “qualify for Medicare.” The “New New York Bridge” was cited as an example of permit fast-tracking — a back-pat to his own administration and a none-too-subtle dig at Congress — while serving as a challenge to build more of what Governor Cuomo, in his introduction, called New York’s “public works that challenge the imagination.”

The Key’s Washington location was important on Obama’s first visit, this time as an example of what it was not. Standing between an American flag and a view of the packed throughway, Obama talked about bridges outside of Washington that were experiencing structural issues and closures, supposedly costing small businesses their livelihoods and farmers the oddly specific loss of “five cents a bushel.”

While the bridge was a visual reference point to discuss infrastructure, it was also a prop in the “Washington-is-out-of-touch” narrative that Washingtonians love to spin — this time to tout the American Jobs Act.

“[A]ll told, our aging transportation infrastructure costs American businesses and families about $130 billion a year,” the president said. “There’s no excuse for 100 percent of Washington Republicans to say no.”

This was Obama’s first appearance to support the Jobs Act. The president said this Ohio River crossing was located on one of the busiest trucking routes in North America — and that it had been labeled “functionally obsolete.” As semis passed slowly overhead, he pitched upgrades as an economic boost to the construction industry.

This is the bridge that began it all. On his campaign trail, Obama stood on a platform against a view of Portland’s iconic green arches and talked up the federal gas tax while skewering Exxon Mobil.

“It’s time that the entire country learn from what’s happening right here in Portland with mass transit and bicycle lanes,” Obama said to cheering from the crowd of 75,000.

Cyclists sped by behind him as he talked; the Hawthorne is known for being PDX’s most heavily traveled bike bridge with as many as 8,000 cyclists crossing daily. Images from the event show bikes parked along the bridge as far as you can see.