Prepping the Statue of Liberty for Rising Sea Levels – Next City

Prepping the Statue of Liberty for Rising Sea Levels 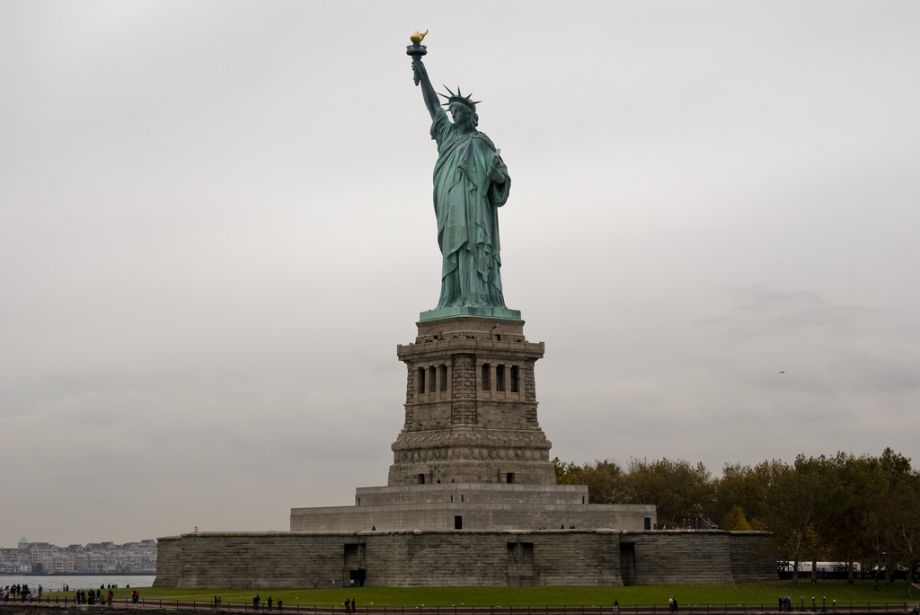 Hollywood loves to mess with Lady Liberty. She’s been half-buried in sand (Planet of the Apes), toppled into the Hudson River (Independence Day), submerged to her torch (A.I.), battered by tidal waves (The Day After Tomorrow) and generally imperiled by just about every sci-fi and disaster-flick trope known to man, from aliens to giant lizards.

That may be the least of her troubles, according to a report released this week by the Union of Concerned Scientists. Titled “National Landmarks at Risk: How Rising Seas, Floods, and Wildfires Are Threatening the United States’ Most Cherished Historic Sites,” the document’s authors write, “Given the scale of the problem and the cultural value of the places at risk, it is not enough merely to plan for change and expect to adapt. We must begin now to prepare our threatened landmarks to face worsening climate impacts; climate resilience must become a national priority and we must allocate the necessary resources.”

During Hurricane Sandy, storm surge submerged 75 percent of Liberty Island’s 12 acres, destroying electrical systems, brick walkways, a dock and the small residence where the park’s superintendent lived with his wife. Nearby Ellis Island got it even worse. The water of New York Harbor covered the entire 27.5 acre landmass, critically damaging mechanical systems, doors, windows and docks, flooding the basement of the Immigration Building and threatening several exhibits. In total, the two islands suffered approximately $77 million in damages.

Since Hurricane Sandy, the National Park Service, which owns and maintains both sites, has taken considerable steps to rebuild the facilities. Liberty Island reopened last July and Ellis Island, which has allowed limited visitation since last year, hopes to reopen fully this summer. Both sites, along with dozens of National Park Service properties around the country, are struggling with how they’ll maintain into the future.

“We’re very concerned about sea level rise, as is anyone with facilities or property on a coast,” says Mary Foley, regional chief scientist at the NPS. “We’re seeing a rising rate of sea level rise and all of the best science to date is telling us to expect an even more rapid rate. In the broad sense, we’re working hard to be good citizens of the planet by reducing greenhouse gases and becoming more energy efficient. We’re exploring all of those options to be part of the solution. And we’re also adapting our facilities.”

On Liberty Island, those efforts included raising vulnerable mechanical equipment at least one foot above the Federal Emergency Management Agency’s newly mapped 100-year-flood level. On Ellis Island, where many of the structures are historic sites, mechanical equipment is being moved as high as possible without disrupting the character of the facilities, and those that cannot be elevated or changed (such as duct work and heating and cooling systems) are being modified so they can be quickly and easily replaced or repaired.

Both islands are also working to reduce energy consumption. “The lights have been changed out and are now LEDs,” says Foley, “and our concessionaires are looking for ways to be good stewards of our parks. There are recycling programs, they use compostables, and they try to source produce as locally as possible.”

“The ferry provider,” she adds, “has developed a hybrid ferry that uses solar, wind and diesel power to get people here.”

Still, there is cause for concern. Jon Jarvis, director of the NPS has said publicly, “I believe climate change is fundamentally the greatest threat to the integrity of our national parks that we have ever experienced.”

From an operational standpoint, Foley says, “It’s an expensive endeavor. We’re meeting the immediate challenges, and we’re planning to meet the challenges of the future.” She notes that new sites, like the Harriet Tubman Underground Railroad National Monument visitor center on Maryland’s Eastern Shore, are being designed and built on the highest possible land using state-of-the-art systems for energy and water efficiency.

But the Union of Concerned Scientists is less optimistic. In their new report, they write, “The Tubman monument includes parts of the Blackwater National Wildlife Refuge, where wetlands at sea level are being lost to the rising ocean at the rate of about 300 acres a year. A 2002 study by the U.S. Geological Survey predicted that the refuge could be underwater by 2050.”

The report also cites instances of a planned retreat already underway in the National Park System. The Cape Hatteras Lighthouse on the Outer Banks of North Carolina was moved inland in 1999. On Cape Cod in Massachusetts, the Park Service is rebuilding bathhouses farther from the shore on higher ground that is less susceptible to rising seas.

As for the Concerned Scientists’ assessment of the Statue of Liberty and Ellis Island, they end their section on those facilities with a telling quotation from Shawn Norton, the NPS bureau chief for the Sustainable Operations and Climate Change Group: “We recognize that these climate change stressors are real, and they are going to become more common and intense.”