Preparing Main Street for the So-Called ‘Retail Apocalypse’ – Next City 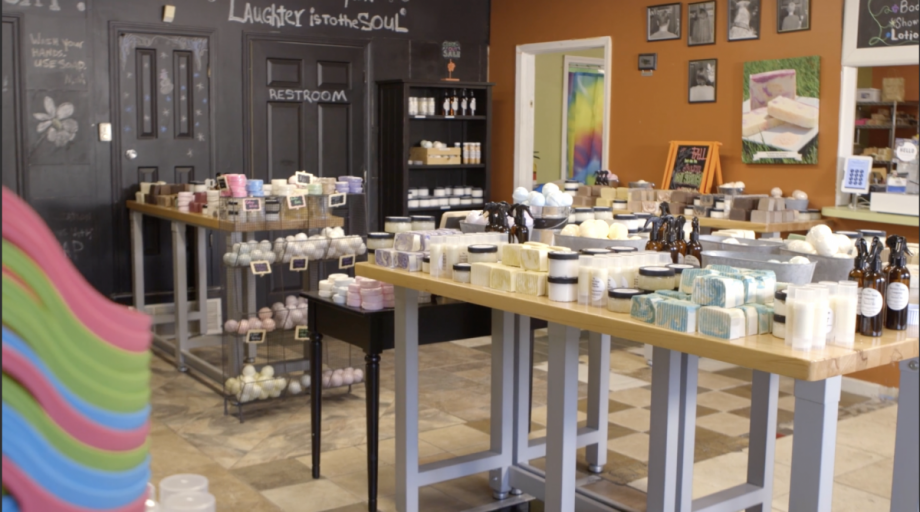 At Buff City Soap Company in Memphis, customers can see soap being removed from the ovens and sliced into bars. Changes to the city's zoning now allow for light manufacturing that are accessory to retail businesses. (Screenshot courtesy Paradigm Marketing & Creative, via Vimeo)

It’s been called the “retail apocalypse”—the growth of e-commerce at the expense of brick-and-mortar stores. The term is misleading: Overall, retail is doing just fine, with industry growth up 4.4% in 2018. But online sales grew by 12% last year, so the growth in e-commerce dwarfs that of the industry as a whole by a factor of 3:1.

The way people spend their money is changing, and fast. While business owners are embracing change, cities are often less prepared for the decisions they must make to remain competitive. And over time, many cities will see brick-and-mortar businesses retract, while still others will become the beneficiaries of businesses looking for the best locations. It is already happening in mall environments: Class A malls are doing well while Class B and C malls struggle.

Cities that want to be on the winning side need to focus on two critical areas. First, they must update existing regulatory frameworks that are increasingly an impediment to innovative business concepts. By lowering the hurdle to entry in any given market, we create opportunities for smaller, less well-capitalized businesses—the “mom-and-pops” if you will. And second, just as a building must be constructed on a strong foundation, cities must address the fundamentals, including accessibility, walkability, and even the co-location of businesses that enable businesses to share customers and improve profit margins. More walkable communities will also better serve people of all ages. This will become critical as the Boomers continue to age. Ensuring their comfort will be necessary to capture their spending.

As a New York City Planning Commissioner and retail strategist working in mixed-use environments for more than two decades, I have realized that changing shopping habits have the potential to upend our lives and affect communities of every size. From Cambridge, Massachusetts (population 100,000) where my firm recently completed a city-wide retail strategy, to New York City (population 8.5 million), challenges will pop up in unexpected ways - from conflicts over streets (how do delivery trucks steer clear of bike lanes on narrow streets?) to confusion over what defines a retail business (are maker spaces “industrial” uses that can now be allowed on retail corridors?).

Existing regulations are no match for the fast-changing retail landscape. In fact, many rules unintentionally hamper entrepreneurial activity, particularly among first-time business owners. For example, in many downtowns manufacturing uses are restricted, yet specialty food manufacturers and breweries are often a great fit for downtown environments. A small-batch ice cream maker in Cambridge, MA had to go through a costly and time-consuming discretionary special permit process to make ice cream in the rear of the store (considered a manufacturing use), all while paying rent on a storefront space. When we asked the owner about her experience with the permitting process, she was quick to share that other entrepreneurs in her circle had decided against opening a business in Cambridge altogether. Up until now, breweries were not even mentioned in Cambridge’s Table of Uses. The closest categorization in the code was a “bottling facility,” a heavy industrial use not allowed along traditional commercial streets. As a result, new breweries had to navigate expensive and costly discretionary approval processes.

The good news is that Cambridge is now revising its Table of Uses to prevent these issues from hampering other businesses. And Cambridge is not alone. Memphis passed zoning that allows for light manufacturing uses when they are accessory to retail. This has enabled Buff City Soap Company to manufacture soap from their downtown Memphis location. Watching staff remove tins of soap from ovens and cut them into bars right in front of you is part of the store experience; it certainly cannot be replicated online.

Another often overlooked factor is the physical environment in which our business districts reside. I often say the job of the public sector is to “stage” the shopper. This means creating a comfortable and safe environment for the visitor—one that encourages longer stays and enables businesses to leverage proximity and share customers.

Consider something as simple as crosswalks. In urban areas, long blocks mean customers cross in the middle of the street, playing a dangerous game of “Frogger” to get safely across. This effectively decreases the number of stores that a shopper can easily visit at any given time, which in turn reduces the length of stay and the amount of money a shopper might spend. Moreover, while able-bodied shoppers might be able to easily cross, that’s not the case for seniors or families with small children. Little wonder that many might prefer to shop safely in the mall or at home.

To address this problem, the city of Corning, New York created mid-block crosswalks throughout its downtown shopping district. Corning boasts a vibrant downtown in the Finger Lakes Region of New York, where economic stagnation is more the rule than the exception. The mid-block crossings are part of a bevy of best practices that enable the district and its businesses to survive and thrive. This simple solution has been executed in many downtowns nationwide.

Another consideration? Signage. Signs are critical to catching the eyes of passersby, but overly restrictive signage rules can prevent businesses from raising their visibility. Signs should be like breadcrumbs, giving shoppers visual clues that something deserving of their attention lies but a short distance away.

In Pittsburgh, our firm recommended blade signs, also known as “shingle” or “banner” signs, for businesses along Shiloh Street in the Mount Washington neighborhood. Why? This community receives nearly two million visitors annually. Most take the Monongahela Incline to see the stunning views of downtown Pittsburgh. But visitors did not often patronize businesses beyond the block adjacent to the overlook. After businesses along the second block put up visible signs, they saw a 30 percent increase in foot traffic, which in turn resulted in increased sales.

In today’s fast-changing retail environment, downtowns must fight for their share of shoppers’ dollars. That means taking a hard look at rules and regulations to determine whether they are helping or hurting local businesses. And it means making key investments in a safe, accessible downtown environment. In this way, cities can create prosperous downtowns that meet the needs of businesses, shoppers and the residents they serve.

Larisa Ortiz is the author of “Improving Tenant Mix,” published by the International Council of Shopping Centers. She is Principal of Larisa Ortiz Associates and a New York City Planning Commissioner.