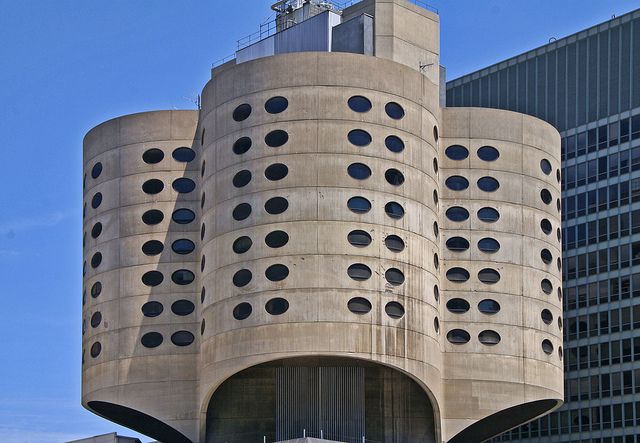 When the concrete cloverleaf of Prentice Hospital sprouted from the Chicago ground in 1975, its award-winning design met the praise of critics and the admiration of many Chicagoans. Architect Bertrand Goldberg drew from Brutalism, but with a symmetry and grace that distinguished Prentice from more angular works in that style.

This week, as Goldberg’s famous work is pulled apart by wreckers, nothing about its loss seems symmetrical or graceful. Within 40 years, the building transitioned from a proud symbol of civic renewal and design innovation to the victim of old-fashioned Chicago politics. The controversy surrounding the demolition of Prentice, however, injected the preservation movement into an urban design discussion with a presence not seen in a long time.

Three years before the construction of Prentice, Chicago preservationist Richard Nickel died a martyr while trying to literally save part of Louis Sullivan’s Chicago Stock Exchange building as it underwent demolition. His death was a milestone in public appreciation of historic architecture in Chicago and nationwide. Decades later, preservation often seems to rear its head less through passionate vision and more through laws and regulations. Urbanists often dismiss preservationists as rule-keepers, but Prentice showed otherwise.

In November 2012, the Commission on Chicago Landmarks carried out Mayor Rahm Emanuel’s instructions to both grant landmark status for Prentice, and then revoke it. Emanuel embraced Northwestern University’s plan to demolish the building, and rather than let it play out through the system, he decided to accelerate demolition by fiat. The mayor had already replaced four commissioners in the prior year with people whose credentials did not meet the commission’s statutory requirements. Chicago’s preservation ordinance seemed as endangered as Prentice. (In fact, the ordinance itself just survived a separate legal threat.)

Local guardians of architecture rose up in defense of both procedure and Prentice. Landmarks Illinois, Preservation Chicago and other voices rallied the public, and even brought starchitects Jeanne Gang and Frank Gehry to publicly testify against the demolition. Advocates also embraced the university’s needs by floating designs for expanding Prentice without compromising its design. In an era when preservation can seem trivial in urban design matters, preservationist voices seemed like the party most willing to compromise — and offered the most thoughtful alternatives to the university’s proposal.

The Prentice episode tested Chicago to see if there was still a preservation movement around. Through advocacy, social media searches for “Prentice babies,” spirited participation at Landmarks Commission meetings and the final court case, the showing was strong. Chicago preservationists packed rooms and paid attorneys, just as they did back in the days of Richard Nickel.

The reality of preservation remains the same, too. Cities are ever-evolving organisms, constellations of desires and conflicts. Long after Emanuel leaves office, someone else will want to demolish some other Chicago landmark. Losing Prentice should not inure anyone to stand down next time. In preservation, there are thousands of next times, many of which will be won because of awareness of what happened at Prentice.

Beyond Chicago, Prentice resonated with admirers of American mid-century modern design. Modernism has arrived at the forefront of preservation in the country, and right on schedule. Historic preservation came of age fighting the forces of modernism, which tore apart rowhouse neighborhoods one expressway and high-rise housing project at a time. General stasis of urban growth allowed late 19th and early 20th century architecture more time to age before its conservation became critical. By the time that people were fighting for landmarks like Pennsylvania Station in New York or the Wainwright Building in St. Louis, the generational remove was long enough that these buildings’ older styles were again revered.

Modern architecture is facing threats earlier in its lifetime, but not so soon that it has no defenders. Today a cadre of younger preservationists embraces suburban ranch houses with the same fervor as the concrete masses of Brutalism. Yet many planners and developers still see modernist works as expendable, either based on style or the same accusations of obsolescence that were aimed at buildings like the Chicago Stock Exchange 40 years ago. Official preservation mechanisms, like the National Register of Historic Places, have been slow to recognize buildings from the recent past.

The preservation movement announced its presence to the nation with an effort to save the Beaux Arts-style Pennsylvania Station in the late 1950s and early 1960s. The loss of Penn Station showed Americans that their heritage was systematically at risk. Modern architecture needs its own “Penn Station moment” to dramatize what is at stake and encourage action. The arguments against buildings remain strikingly the same as ever.

Prentice Hospital may well be a new era’s Pennsylvania Station. After the latter fell, local landmark laws and the National Historic Preservation Act rose alongside a growing preservation movement. The fall of Prentice offers a similar fulcrum in the wide public appreciation of modernist architecture, and in the renewal of a movement that must show its relevance to the challenges cities face in the 21st century.