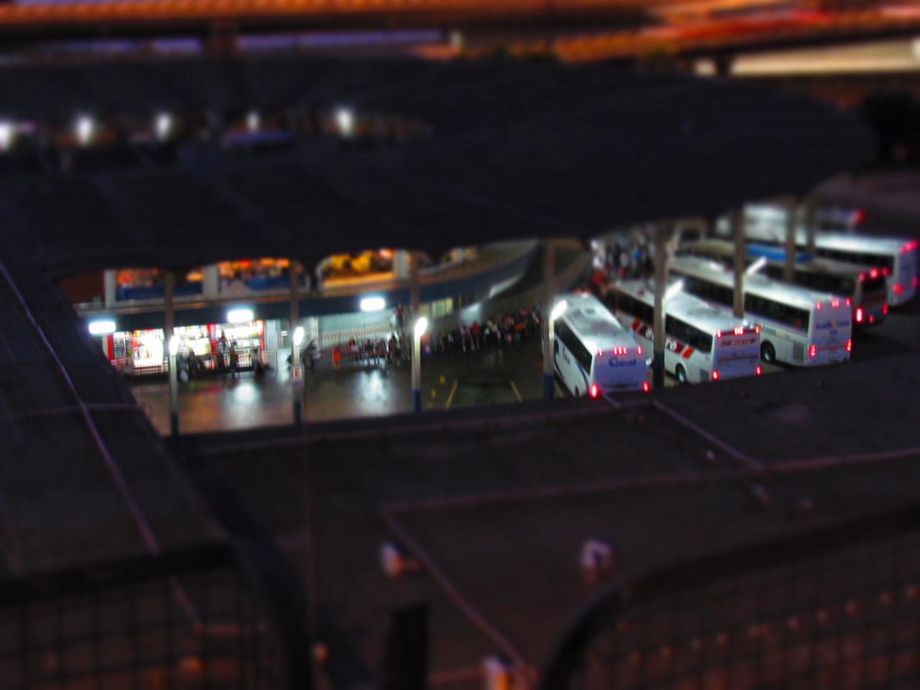 Buses in Porto Alegre. (Photo by Cintia Barenho via Flickr)

Passengers arriving at Salgado Filho International Airport in Porto Alegre are greeted with a specimen rarely found in Brazilian airports: an option besides buses and taxis.

Thanks to the Aeromóvel monorail system, they can get from the airport to the nearest Trensurb commuter rail station and on to downtown Porto Alegre for a paltry R$1.70 ($0.75 USD). But the 30-year saga that resulted in a mere 814 meters of monorail, at a cost of R$37 ($16.24 USD) million, exemplifies more contentious debates about how to use federal transportation money to improve public transit in this city of 1.5 million.

Aeromóvel came to fruition thanks to the massive injection of capital occasioned by the World Cup. Brazil’s existing federal infrastructure program, PAC, was allocated special lines of financing for public transit projects in the 12 host cities, totaling R$12.4 ($5.44 USD) billion. The result has been a shower of federal funding for subway, bus rapid transit (BRT), light rail, exclusive bus corridor and other projects (although the score card by the time the soccer tournament rolled around was decidedly mixed).

Porto Alegre’s proposed first subway line was one of those funded projects that did not make it to the finish line by kickoff even though public officials called it the World Cup Line. As a result, it became the butt of internet jokes, like the website naovaisair.com.br, which offers up a new promised project that wasn’t ready by the World Cup with each refresh of its homepage.

In fact, even the contracts for the subway line haven’t been issued yet, although there is a proposal on the table for 20.8 kilometers (12.9 miles) to be built in two phases. Mayor José Fortunati, in a May interview with Terra Magazine, assured that the bids will go out by the end of the year and confessed, “We knew the Porto Alegre metro wouldn’t be ready by the Cup.” He claimed that linking the project to the World Cup was a way of assuring the federal investment of R$1.7 billion ($750 million USD) that will make the project viable as part of a 30-year public-private partnership estimated at R$5.3 ($2.33 USD) billion after factoring in city, state, private and tax break funding.

Building a below-ground subway is an intensive construction project that understandably takes time. By contrast, several BRT projects did open by the World Cup, such as the Transcarioca line in Rio de Janeiro and the Move system in Belo Horizonte (though tragically the latter suffered an overpass collapse that killed two in July). Overall, PAC funding was invested in 20 BRT projects and 11 subway projects as selected by the Ministry of Cities.

Given the federal government’s willingness to invest in both subway and BRT, the latter a Brazilian invention, Luis Antônio Lindau, President of EMBARQ Brasil, which is based in Porto Alegre, wishes the city and state had pushed federal funders to consider a BRT project. “We don’t know if the subway will happen, it’s still on paper,” he cautions. “It would have been far more useful to build a transportation network and not just 10 kilometers of a subway line [the distance proposed for phase one]. Rio is doing hundreds of kilometers of BRT for the price of 10 kilometers of subway.”

Economist Heber Moacyr dos Santos, a specialist in urban mobility at the Rio Grande do Sul Planning Secretariat, believes the benefits of subway over BRT for Porto Alegre have clear antecedents in South America. “For the same reason that Bogotá and Curitiba prioritized BRT and are now building subways: BRT can’t handle subway’s capacity,” he says. His office’s studies indicate that by 2020, the subway could be handling as many as 22,000 passengers per hour at rush hour with two-and-a-half minute headways.

The Ministry of Cities backed up dos Santos’ point. “Subways are known for being high capacity systems that serve large urban concentrations and structure overall public transportation,” writes the Ministry’s press office in response to an inquiry.

Meanwhile, Porto Alegre already has an ample, if chaotic, system of buses, many of which benefit from exclusive corridors. They form of the backbone of the state’s vision for an integrated transport network serving 33 municipalities in greater Porto Alegre by bus, ferry, train, subway and potentially BRT. Nevertheless, dos Santos remains a skeptic.

“BRT is being discussed but the citizens don’t like it because it divides the city – you need an overhead walkway to access it. My guess is that we won’t have BRT,” he concludes. His colleague Roberto Vieira, coordinator for technical advising, adds, “The mayor sometimes talks about BRT but what he really means are the exclusive bus corridors.”

Ultimately, despite his preference otherwise, Lindau admits that the political reality was predictable. “No mayor is going to turn down this kind of money,” he says, “And besides, voters don’t know what BRT is, they only recognize subways when it comes to public transportation.”