Portraits of Brewerytown – Next City 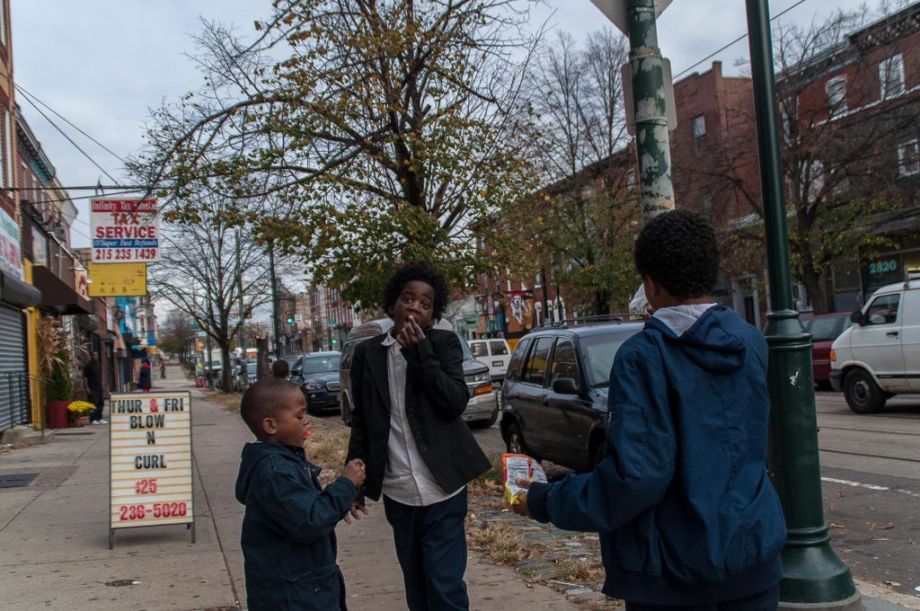 As a photographer who describes her work as challenging the “prevailing notions of otherness” in urban space, Tieshka Smith seemed like a natural fit for an exhibition on Next City’s Philadelphia neighborhood of Brewerytown. Smith, a Chicago native, has been based in Philly for two years. Her photos capture ordinary people going about their lives and interacting with one another in all sorts of public places: On escalators, in barbershops, before storefronts, at bus stops. Her upcoming exhibition, to open at Next City’s Storefront for Urban Innovation on January 13, offers a glimpse into the lives of people — residents young and old, community leaders and business owners — who live and work in the fast-changing Brewerytown.

Next City: As a longtime resident of cities, and a two-year resident of Philadelphia, what were your impressions of Brewerytown before beginning this project?

Tieshka Smith: I’ll have to be honest with you. When I began looking into research that had been done — planning documents — I felt a little discouraged.

Smith: I realized that Brewerytown is a typical Philadelphia neighborhood with challenges, but it also has a lot of assets. So I wanted to approach the project from that perspective — talking to people, highlighting the assets and helping to develop a more positive image of the community to counterbalance everything I had read about: The violence, the crime problem, the depressed economic situation. Those things, I felt, needed to be counterbalanced with some more positive coverage, per se.

NC: I noticed that a lot of your pictures had images of children. Kids running, kids playing on the street, kids shopping in stores, working out at the gym. Was that an intentional move?

Smith: Not only do they provide the best pictures — I think people can always emotionally connect with kids — but kids represent a sense of vibrancy. Despite some of the issues Brewerytown faces, it’s still a place where children have to make a home. People in the community do the best that they possibly can to provide a positive space where kids can be kids, so I wanted to portray that.

NC: You dedicated about five photos to a boxing gym. I was wondering what did you see in that gym?

Smith: When I began talking to various stakeholders in the community, everyone said you need to go check out the boxing program at the rec center. Because it’s been a longstanding fixture in the community, and it’s helped a lot of young people develop life skills. It’s been a moderating influence. Fred Jenkins, the trainer and rec leader who oversees the program, is like an icon. So it was a destination for me.

I spent a couple of days there shooting. The first day I spent was with the young men who box. I felt like I was intruding in a lot of ways. It’s a space for young men to learn how to be young men, how to gain self-discipline, how to channel energy into something structured… And then Fred Jenkins told me to come back to shoot some images of the girls that box there. They have a separate session or two every week. So I wanted to counterbalance the work that he does with the young men with the work that he does with the girls. That’s why I processed the two sets of images differently: The black and white for the guys and then the color for the girls.

NC: In media or on television, when we talk about neighborhoods like Brewerytown, the talk usually does focus on young men. They’re usually considered the most “at-risk,” or what have you. Were you trying to pick up on specific differences between young men and young women?

Smith: I was looking to show more commonalities. I also wanted to be fair. Yes, if you’re a girl or boy, or young man or young lady, you’re going to work hard in this program. But I think it’s a special thing to see girls boxing. I felt like, “wow, this is really great.” You hear about Laila Ali or other boxers who have come up recently, and have created a reputation for being tough in the ring. But women’s boxing is still a relatively new phenomenon for people, and I think people in the community need to see that girls can do this, too. That’s why I tried to make sure I called that out in the series, because programs have been so focused on men for so long.

NC: Can you talk a bit about the commerce along Girard Avenue?

Smith: Be mindful that I’m a Germantown resident, and have been involved in a lot of discussions around the business corridor up in Germantown, and how people have been complaining about how bad Germantown is. And then I got to Brewerytown, and I thought, “Germantown’s great!” There’s a lot of potential in Brewerytown, there’s a lot to build on. But in scale it’s much smaller, and it’s much more inclined to the community in terms of the types of stores that are on the strip — people can afford to shop there.

What I liked about the business corridor is that there are people like Jim [Davis] of Music Box Records. He’s been there for so long, and he’s devoted to not just making a living there in the community, but to seeing the process of revitalizing that corridor all the way through. As I began to talk to people who own businesses and who operated businesses there, I got the sense that this may be smaller in scale, and there may be a number of things that can be improved upon, but it’s a great place to start. There are people here who really care about trying to play a part in improving the corridor.

Another thing I was interested in: It was cold when I was shooting. I couldn’t get a sense of what this place looks like in the summertime. Is there a lot of people, is there a lot more color? Do people put displays out, is there more of an open-air market experience? What is it like when it’s warm? I don’t know. I didn’t have that to think about, but given the fact that I was shooting in the late fall and early winter, there were people out.

NC: You didn’t have the seasonal contrast, but did you return to Brewerytown at different times of day and night? And if so did you notice the neighborhood, and Girard Avenue in particular, change at all?

Smith: [Laughs] Oh yeah. Some days I would start in the morning and I’d end up wrapping up after the sun goes down, and obviously it completely changes. All the nightlife comes out, and it’s colorful. This is the thing that fascinates me about Philly and other cities that have urban neighborhoods, and people stay in those neighborhoods, and they never leave and know everybody — there’s this sense of camaraderie, and everyone’s out drinking beer and hanging out outside of the Stop & Go. And you kind of feel like an intruder again, but it’s a great thing to observe. I moved around so much and never really had the chance to be rooted in one particular community, from the time I was a kid to being a full-grown adult. So it’s fascinating to observe people. You see that as the day goes by and the sun goes down. People come out, and it’s a whole different crew, but it’s interesting to observe.

NC: Brewerytown is still very much a pockmarked area. It has many vacant lots and abandoned buildings. But changes are definitely afoot. Maybe not as fast as in, say, Northern Liberties, but storefronts are filling up, some lots are being dedicated to urban gardens, and people are finding uses for these spaces now. How do you think this development is having an effect on neighborhood’s psyche?

Smith: Well, I can tell you what people have shared with me. I think that overall, people believe that the changes are a good thing, and that they can stand to benefit from those changes. When you institute developmental shifts, from reducing blight to creating more economic projects, people who are lower-income — usually poor, usually black or brown — feel like, “Is this going to be for me or is this going to be for someone else?” In some communities, I know, it can create tension.

But I think in Brewerytown, people have taken these changes in stride. They recognize, “I can benefit from this, but I’m just going to sit back and watch and see what happens.” I talked to Eddie [Branch], who day to day runs the Marathon Farm, which is in Brewerytown, and he had some interesting observations about how the community has reacted to the presence of that farm. People are kind of okay with it, but they don’t really know how they fit in. I think there’s an opportunity to create a dialogue around these issues to help move the neighborhood’s psyche along, so that [residents] feel comfortable with all these things that are happening. With the new grocery store, there are opportunities to engage the community around food issues.

I just think that if it’s done correctly, people can feel like the changes are not imposed upon them, and that the changes are for them and for others, a lot of people will benefit, and we can all move on. It’s a matter of how it’s going to be played going forward.

Photos by Tieshka Smith, except where specified.