An Oil Discovery Revives a Dwindling Brazilian Port – Next City 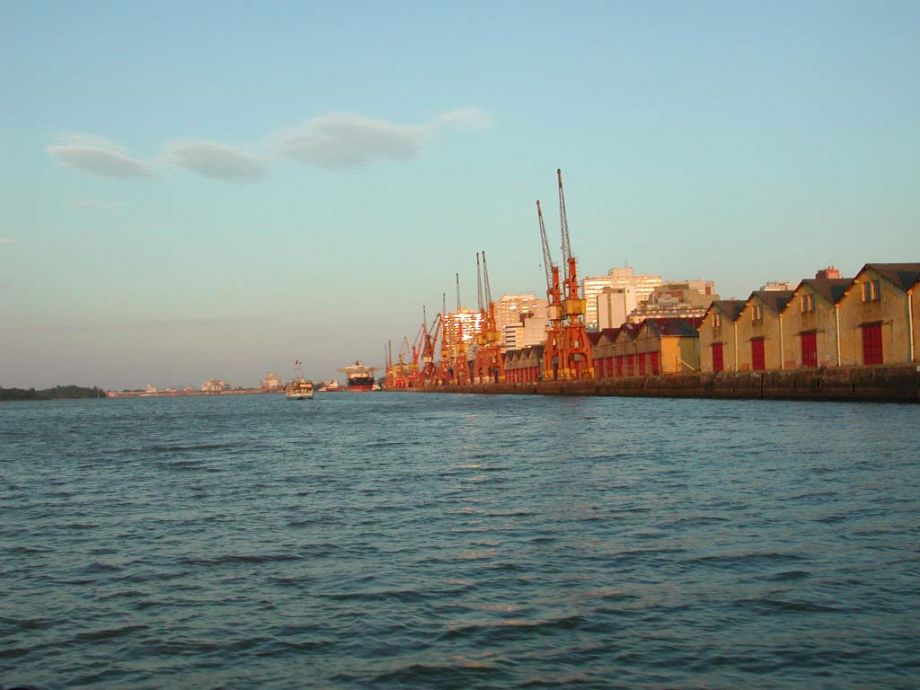 Since 2006, Brazil’s state-owned oil company, Petrobras, has discovered massive oil and natural gas fields offshore. Extraction is already underway, and if estimates hold true, they will make the country one of the world’s 10 largest oil producers.

The find was heralded by then-President Lula da Silva as the nation’s “second independence” and proof that “God is Brazilian,” as the local saying goes. But the black gold is buried under 6,600 feet of water and 16,000 feet of a geological feature known as the pre-salt layer. As a result, Petrobras has been developing new technology and requires even more logistical and maintenance support from shore than the usual oil platform operation.

In an effort to spread the wealth around – the oil fields themselves are in the coastal zones of three states, which will earn royalties from the extraction – the Brazilian government designated a Polo Naval, or economic cluster of maritime activity, along the coast of Rio Grande do Sul in 2010. According to a statement from the Brazilian Agency for Industrial Development, the state’s Polo Naval already has $7 billion USD worth of offshore projects underway, not including investments to build the shipyards themselves.

The state’s Polo Naval is situated in the municipality of Rio Grande at the mouth of the Lagoa dos Patos, the largest lagoon in Brazil and the second largest in South America. Connected to the ocean by a canal, the Lagoon covers nearly 4,000 square miles (twice the size of the Great Salt Lake), before reaching the state capital, Porto Alegre, to the northeast.

Although the offshore oil boom seems far from the inland capital where two rivers converge before emptying into the Lagoa dos Patos, the discovery is bringing the city’s struggling port back to life and making the Porto Alegre feel relevant again. In the 1990s, the port was struggling as commerce increasingly shifted to the state’s highways. With a prime location near downtown, there was even real estate pressure to close the port entirely and develop the site.

“People forgot about moving goods via waterways,” says Arlindo Bonete Pereira, superintendent director for ports and waterways in the State Secretariat of Infrastructure. “Previous governments weren’t interested and didn’t invest in the port.”

The enormous potential impact of the Polo Naval will make waves all the way up the lagoon, however, as the supply chain to support its activities spans the whole state. Maurenio Stortti runs a consulting firm that authored a major report for the state of Rio Grande do Sul about the cluster (supplementary report in English by Global Urban Development). “We have a methodology that maps the 32 municipalities with the potential to receive the smaller products and complementary industry generated by the Polo Naval. And Porto Alegre is the principal city,” he explains.

The port already transports food – the state is a major producer of soy, rice and beef – but agricultural goods will soon be sharing space with light-industry products like specialized spare parts for oil rigs and microchips for high-tech deepwater drilling devices, coming out of the capital’s burgeoning tech sector. The Brazilian oceanic engineering firm Ecovix is contemplating an investment of up to R$100 million ($45 million USD) to provide support services for its shipyard at the Polo Naval in Rio Grande, which could create up to 1,000 jobs. However, reports in the local press cite bureaucratic hurdles at the municipal level, such as delays in the issuance of environmental and planning department permits, that nearly caused Ecovix to pull out. The permits were issued in September 2013.

A joint Brazilian-Austrian venture, Koch-Palfinger, held a groundbreaking ceremony on June 27 for a new facility to build and test cranes, with a $2 million USD investment planned for starters. Pereira affirms that 80 new jobs will be created by the new port activity from Koch-Palfinger. “Today we are returning to the investment that we made in the past,” he says.

For Francisco Milanez, secretary of sustainability for the State of Rio Grande do Sul, the resurgence of the port will be an environmental boon. “You can carry dozens of trucks with less pollution, fuel and risk of accidents,” he affirms. “We’re a state rich in rivers, but we transport everything by highway.”

As the state capital, Porto Alegre is the hub of Rio Grande do Sul’s highway network, which has choked the roads with heavy truck traffic. This doesn’t have to be the case. “The Lagoa dos Patos could handle the freight needs of the whole state – from our imports to our exports, like agricultural goods and cars,” Milanez believes.

Greenpeace warns that consuming all that pre-salt oil could release 35 billion metric tons of CO2 into the atmosphere over the next 40 years, more than the whole world emits annually in the present day. But the direct impact of the Polo Naval on the Lagoa dos Patos should be negligible, according to Milanez, because the lagoon used to receive more shipping traffic than it does currently and only medium-sized ships, not oil tankers, will be transporting goods across its waters. “The lagoon is rather healthy,” he says. “The biggest contributor to any pollution is conventional rice production, because the pesticides run off into the lagoon.” Apagan, the state’s oldest environmental organization, had no comment on the matter.

Oil is undoubtedly a dirty business, but in a country whose state-owned oil company was founded under the motto “the petroleum is ours,” the pre-salt extraction is a fait accompli. Cities far from the lucrative offshore fields are wise to take advantage of the benefits while keeping the crude at arm’s length, especially if they can resurrect a sustainable transportation model along the way. For Porto Alegre, busier waterways and less crowded roadways is a fair trade.