Portland Wants to Factor Cyclists Into the Speed Limit Equation 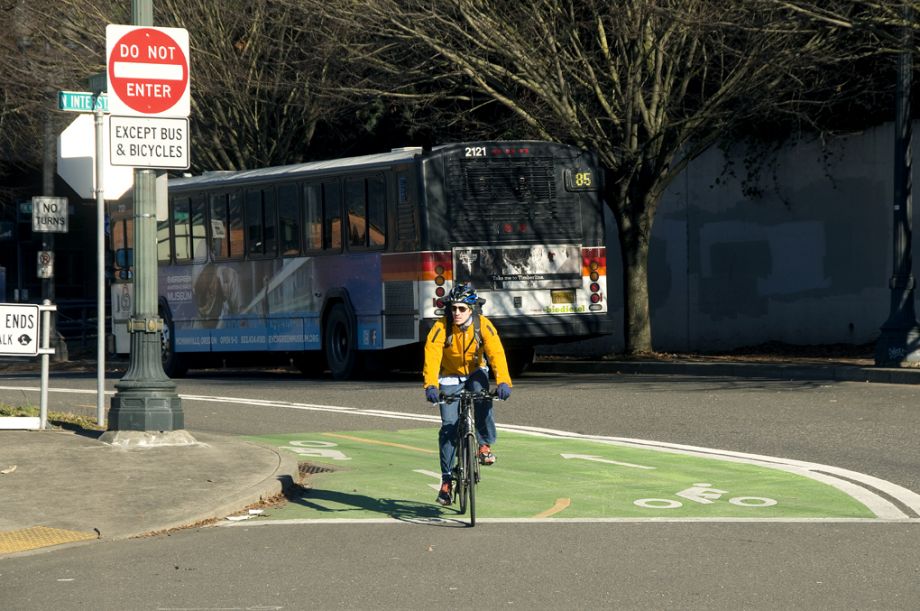 In a bid to protect streets’ most vulnerable users, Portland’s Bureau of Transportation (PBOT) pitched a proposal that would allow the city to take pedestrians and cyclists into account when determining speed limits. According to the Portland Mercury, the state currently analyzes only automobile traffic patterns when making these decisions. Now PBOT wants to try a new system in which the entire road design and traffic pattern, including foot traffic and distance between bikes and cars, is considered as well. The bureau argued its case to Oregon’s Speed Zone Review Panel — which has final say over whether speed limits on any roads in the state can be changed — earlier this month.

If adopted, officials say the proposal would make it easier for the city to lower speed limits on moderate-traffic roads. PBOT has released a map of possible corridors whose speed limits currently exceed 25 miles per hour, including East Burnside Street and Holgate Boulevard. The current process can take over a year to change a speed limit.

“Speed is a key factor in road safety,” states the proposal PBOT presented to the state, “especially for people traveling outside of motor vehicles who are not buffered from the impact of crashes.”

Even though the city adopted Vision Zero last summer, and despite Portland’s reputation as a city friendly to the non-motorist, pedestrians and cyclists have not fared well this year. Four cyclists have died in 2016, twice as many as in 2015, and the highest number since 2009. Portland pedestrians are killed at a rate more than two times the national average, according to the city.

But despite the fact that speed is a crucial factor determining the severity of a crash, Oregon, like many states across the country, does not take non-motorists into account and relies heavily on the “85th percentile” speed to set limits. With that method, limits are set based on the speed at or below which 85 percent of drivers travel.

According to the Portland Mercury, that approach has long frustrated cycling and pedestrian advocates. “It doesn’t reward good behavior,” says Rob Sadowsky, executive director of the Bicycle Transportation Alliance. “If your goal is to lower speeds on a road that already has high speeds, you’re stuck.” One PBOT official said that when the bureau recently asked the state to lower the speed limit on a prominent bike corridor, it was not allowed to cite the high prevalence of cyclists as a reason for the request.

“It’s as if they’re literally not there,” says Margi Bradway, PBOT’s active transportation and safety manager.

If the new proposal is adopted — and the state has signaled it will sign off, pending a few changes — cyclists will be back in the equation. PBOT tested the new system on a stretch of North Willamette with a 5-foot-wide bike lane that would post a speed of 41 miles per hour using the 85th percentile approach. Using the city’s new method, which calculates speeds based on how close motorists come to other types of travelers, the speed would be reduced to 30 miles per hour.