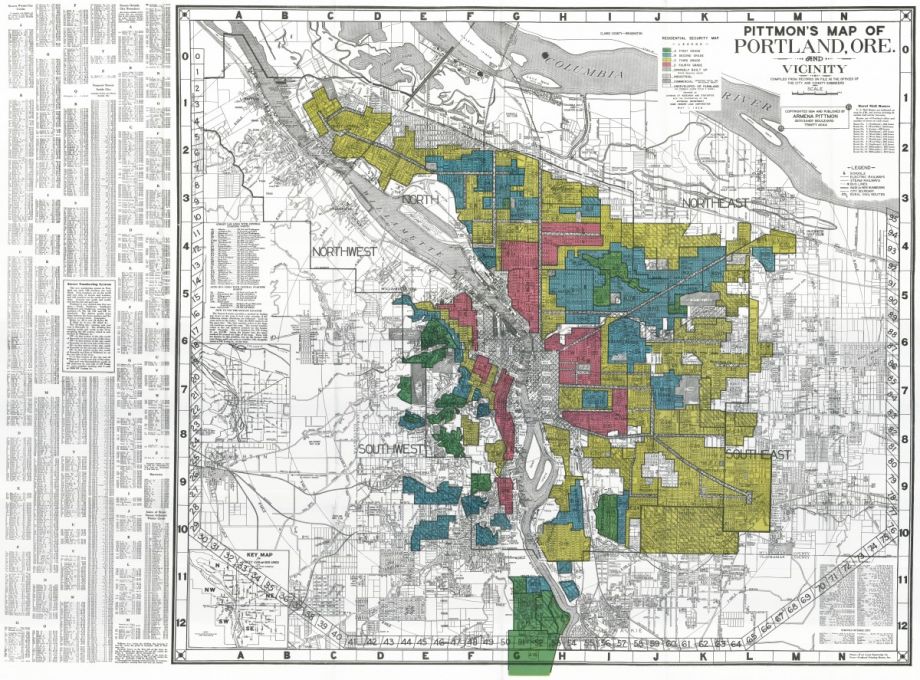 For some residents and business owners, the placard requirement prompted strong emotions. A number of the city’s approximately 1,650 unreinforced masonry buildings in need of retrofits are located in the historically black neighborhoods of North and Northeast Portland.

E.D. Mondaine, a 35-year Portland resident who is a pastor, restaurant owner and president of the Portland Chapter of the NAACP, was reminded of the city’s history of racist housing policies, which have been enforced through redlining, predatory lending, eminent domain and environmental injustice. Today, he adds, North and Northeast Portland — where public policies and private real estate practices combined to force many of Portland’s black residents to live — are today facing increased pressure of gentrification.

Some building owners felt the placard exaggerated the risk and would scare away customers, making it even harder to afford retrofits and potentially forcing legacy owners to sell or otherwise lose properties as a result of noncompliance.

“Now you’re going to placard what’s left of our institutions and historical landmarks?” Mondaine says. “It dances in the dark of the history of this racist state. It is an overwhelming implication of inequality in the whitest major city in America.”

Portland is one of many Pacific Northwest cities trying to address earthquake risk, particularly after the 2015 publication of “The Really Big One” in the New Yorker. A number of cities have focused on unreinforced masonry buildings, which according to FEMA pose a 20 percent risk of collapse when earthquakes hit.

“The city council felt like they had to do something to address risks in the physical environment and unreinforced masonry buildings because of the huge risk they pose,” says Jonna Papaefthimiou, the planning, policy, and community programs manager for the Portland Bureau of Emergency Management. “They felt it was the right place to start.”

The city had embarked on outreach, formed committees, and published reports prior to the city council vote. “We approached it as the right thing to do, but treated it like a technical problem to be solved,” Papaefthimiou says. “In retrospect, we relied on the same outreach mechanisms the city always uses … we didn’t do extra or special or different outreach to historically underserved groups.”

Concern and confusion around the ordinance has been varied, as unreinforced masonry buildings are located around the city and include homes, houses of worship, music venues and other businesses. A requirement that building owners record their building status with the County Recorder’s Office also arose concern.

“The impediment will act as a nonnegotiable contract to devalue property, force disinvestment, and coerce dispossession under the guise of public safety for the benefit of speculative redevelopment,” said a statement by the Portland Chapter of the NAACP.

As North and Northeast Portland are home to many unreinforced masonry buildings, including historic churches, it’s become a specific area of concern.

“Areas like Albina [in Northeast Portland] have already been dealing with rapid gentrification,” says Anthony Bencivengo, an organizer with Portland Tenants United. “This could heavily accelerate that, because who’s going to have the money to buy these buildings up if the current owners are required to make major upgrades to them?”

The Unreinforced Masonry Seismic Retrofit project did include a financial committee to consider costs and financial support. “They identified a lot of good ways to help building owners,” Papaefthimiou says, “But they didn’t identify a lot of sources of funds to do the work. It’s very hard for a public agency to subsidize improvements to private real estate.”

Placarding was initially supported by the City Council, Papaefthimiou adds, because it was a low-cost way to increase awareness of earthquake risk.

Protestors of the ordinance, who rallied on the matter outside City Hall this January, are calling for a more inclusive engagement process that re-examines how the city allocates resources for earthquake safety. “Putting a placard on a building won’t take care of the problem,” says Mondaine. “But do we want our cities to be safe? You betcha.”

Portland representatives are listening. “Given the history of redlining and other actions the city had taken historically to force people out of their neighborhoods and buildings … it felt like a continuation of that history,” concedes Papaefthimiou.

This month, City Commissioner Jo Ann Hardesty, the first woman of color to serve on Portland’s City Council, proposed to delay the placard requirement until 2020. Her resolution also seeks to repeal the requirement that building owners record their compliance. Around the same time as her announcement, a federal court’s restraining order temporarily barred the city from any enforcement.

The city will re-engage communities, looking at specific concerns of nonprofit organizations and private building owners. The Portland Bureau of Emergency Management also brought a bill to the state legislature that would provide $20 million of grants to retrofit unreinforced masonry buildings belonging to nonprofits.

The NAACP Portland chapter has another rally scheduled for Feb. 20, the day Portland City Council is scheduled to consider Hardesty’s resolution.

“It all starts with a conversation,” Mondaine says. “What is the most equitable and inclusive way to look at this venture? It’s not going to be perfect, but it will be starting from the bottom, and everybody rises.”