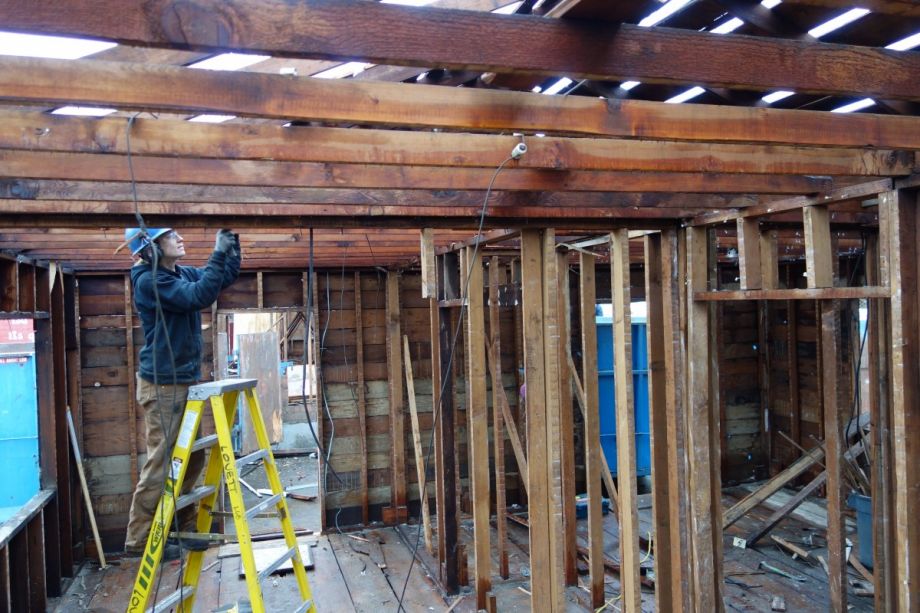 When it comes to building materials, Portland doesn’t just want to promote recycling; the city is making efforts to mandate reduction and reuse. This summer, the city council unanimously passed an ordinance expected to triple the number of buildings that are manually deconstructed — rather than mechanically demolished — each year. Starting October 31, anyone seeking a demolition permit on a designated historic structure, or on a single-family home or duplex constructed in or before 1916 must manually deconstruct the building instead.

Deconstruction is just what it sounds like: construction in reverse. The light plates are removed, and then the electrical outlets, the trim and finish, the cabinetry and appliances. The drywall is taken out, or if it’s an older home, the lath and plaster. Then the roof is disassembled and the walls taken down. “Until there’s nothing left,” says Stephen Reichard, executive director of the Portland-based Rebuilding Center, which both engages in deconstruction and sells salvaged materials. “You’re literally reverse engineering it pretty much right down to the foundation.” (You can watch a time lapse of the process here.)

Drywall and plaster can’t be reused, but all the other materials above could find their way to a place like the Rebuilding Center — which accepts donations — or reappear as the hip salvaged wood countertop at a local bar. Reichard says about 85 percent of building materials can typically be salvaged, though he knows someone who reused more than 95 percent on their own home deconstruction.

“It’s possible to be more aggressive but we have to balance it with available space and what the demand is for the materials,” Reichard says.

Shawn Wood, construction waste specialist in Portland’s Bureau of Planning and Sustainability, says in drafting this ordinance, the city was concerned about demand too. With construction in Portland on the rise, and the city already mandating that 75 percent of construction and demolition materials be recycled, “demolitions were a pretty obvious source to try and divert materials to reuse as opposed to just recycling or landfilling,” he says.

But in conversations with a deconstruction advisory group formed two years ago with members of the development and salvage communities, as well as community groups and preservationists, the bureau tried to walk a fine line between promoting forward-thinking policy and not overwhelming the market with a barrage of materials.

“As much as [members of the advisory group] want to see increased products coming through their doors, and increased jobs in deconstruction work, they didn’t want to see it flooded,” says Wood. “If we flipped the switch and said everything needs to be deconstructed, we’d end up flooding the market.” Prices for salvaged materials would drop, which would cause the cost of deconstruction to rise, since selling materials helps offset the costs of the additional labor it takes to disassemble a house.

Some members felt the materials were too valuable not to require deconstruction for all projects; other advocates pressed for universal deconstruction to reduce the risk of hazardous material exposure resulting from mechanical demolition. In the end, they settled on a compromise: Only single-family homes and duplexes built before 1916, and designated historic structures would be mandated to deconstruct. Currently, about 350 single-family homes and duplexes are taken down in Portland every year, about 10 percent of which are deconstructed. With the new ordinance, the number is expected to triple to around 100 houses a year. “We agreed that a third is a healthy start,” says Wood. “It’s bold enough to push the industry but balanced enough not to overwhelm it and flood it.”

There were other considerations. Manual deconstruction increases opportunities for finding hazardous materials, which must then be removed by an abatement specialist. Mechanical demolition of a 1,200-square-foot house might take about two days, whereas deconstruction could take around 10. Demolition for that house might cost around $10,000, compared to $16,000 to $18,000 for deconstruction. For the past year, Portland has been offering $2,500 grants for both partial and total deconstruction. Recipients were required to report back to the city about the process, like whether hazardous materials were found and how they were disposed of.

“We’re providing money to these projects but we’re getting something back,” says Wood. “We’re getting hard data but then also some softer stuff like lessons learned.” That feedback helped inform the deconstruction ordinance. Grant recipients were required to place a sign on the site of an active deconstruction, for example, to educate the public and promote the method. The ordinance requires signage too. The grants will continue; they’ve recently been increased to $3,000.

The Bureau of Planning and Sustainability also held a deconstruction training for contractors in July, which should result in about 13 people qualified to bid and do work on jobs required under the ordinance. With the increased demand, Wood expects the ordinance to create between 15 and 25 jobs. The bureau will hold a longer, more intense training for workers once contractors get a sense of how much additional staff they’ll need. “We’ll let the market fine-tune that, but we’re at least planting the seeds by providing training,” says Wood.

The ordinance does stop short of requiring that contractors actually reuse a certain percentage of materials. Every house will be in a different condition, says Wood, making it difficult to set quotas. The bureau is currently working on administrative rules to supplement the ordinance that will further define what materials are considered salvageable versus recyclable. Despite the lack of a reuse requirement, “There will be motivation to salvage just because that helps to offset their costs,” says Wood. “To pay to dump something costs more than it would to donate it or sell it, make a profit.”