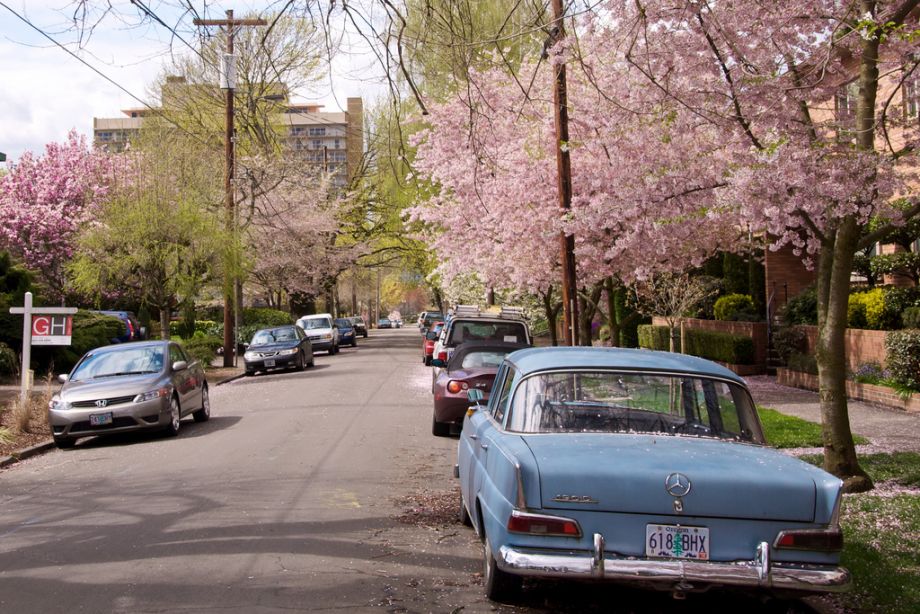 In a bid to ease tensions over limited on-street parking, Portland may implement a new residential permit program — one that gives more control to neighborhoods.

Neighborhoods feeling squeezed for spaces would vote on whether to issue parking permits for residents. Neighborhoods would set their own rates, and keep excess revenue to make local improvements, like installing crosswalks or flashing beacons.

The proposal was developed by a stakeholder advisory committee assembled by the Portland Bureau of Transportation (PBOT). For the past year, PBOT has been reevaluating how the city manages both on- and off-street parking as a continuous system, particularly in neighborhoods experiencing growth, says Grant Morehead, a PBOT planner who oversaw the stakeholder process.

Thirty business and neighborhood association representatives, cycling and pedestrian advocates, and citizens at large met throughout 2015 to develop recommendations. Portland City Council will vote on them this spring.

Of all the ideas, the permit proposal is reviving a debate in Portland over who should pay for parking in residential neighborhoods: developers of new buildings, and by extension, their residents? Or should everyone be charged for the limited, but deceptively “free” resource of on-street parking?

“A lot of people here, they have always had a spot right in front of their house, all of the time,” says Kristin Eberhard, a senior researcher for the Sightline Institute who wrote about the proposal. She lives in Southeast Portland, where a boom of multiunit construction has new residents competing for space with neighbors in single-family homes.

“A change to that is very, very frustrating [for them] and it has become a thing that is driving NIMBY-ism and driving resistance to density,” she says.

As Portland’s popularity has increased, the city has mandated relatively few off-street parking spots for new construction compared to other U.S. cities. For nearly 20 years, new buildings close to frequent public transportation were not required to build parking at all.

But when residents of those new buildings did bring cars, and availed themselves of on-street spots, longtime residents protested, prompting Portland City Council to reinstate parking minimums in 2013.

The current system is designed to manage daytime commuter parking: people from outside the neighborhood driving in, parking on the street and then completing their commute by another mode. The permits regulate working hours.

But in Portland’s growing mixed-used residential and commercial areas, demand peaks not during the day but in the evening. Residents of single-family homes, multiunit apartment buildings, and “happy hour crowds” traveling to neighborhoods for restaurants and bars all compete for finite spaces.

Current city code also prohibits PBOT from limiting the number of permits issued. In Northwest Portland and the Central East Side, two neighborhoods experiencing tight parking thanks to drive-in commuters and increased nighttime demand, PBOT issues about twice as many permits as there are spots.

“Right now in some of our permit areas that have experienced growth we refer to the permits as ‘hunting licenses,’” says Morehead, “because it gives you the right to look for parking, but you’re not at all guaranteed to find a spot.”

Eberhard says that charging for on-street parking is a sensible way to manage a limited resource, but it may not be popular at first.

“The general feeling is [the lack of parking] is the developers fault,” she says. Why should long-term residents start paying for parking now, the thinking goes, when developers could just build more off-street parking?

Eberhard says this view obscures the reality that neighborhood on-street parking always had a cost; residents just weren’t paying it. Many would argue that pushing all of the cost of parking onto one group of people — in other words, residents in new buildings — is unfair and inefficient, and parking minimums can also discourage development and raise rents.

Eberhard sees permits as a tangible reminder that nothing is “free” because they “reinforce for people that this is a public asset that’s owned, maintained by the city, and should serve a common good, not just a private good of you privately having a space to park your car.”

At the same time, she hopes permits don’t swap one sense of entitlement for another: “Just because you pay for a permit doesn’t mean you own the public right-of-way.”

Eberhard’s neighborhood was highly involved in the stakeholder process. She thinks it will opt in to a new permit system if adopted, and use any revenue to install a flashing beacon at a nearby major commercial corridor.

Reviewing residential parking is just one way PBOT is reevaluating on- and off-street parking as a complete ecosystem. Using permits to set the “right price” for on-street parking will both ensure spots for residents and could discourage visitors from driving to neighborhoods. The excess revenue from permits will be used to improve the bicycle and pedestrian environment, “so that it becomes easier not to have a car,” says Morehead.

City council will need to grant PBOT the authority to engage in performance-based pricing. In the meantime, Central City will see its first street parking rate increase since 2009 next week: from $1.60 an hour to $2 an hour.