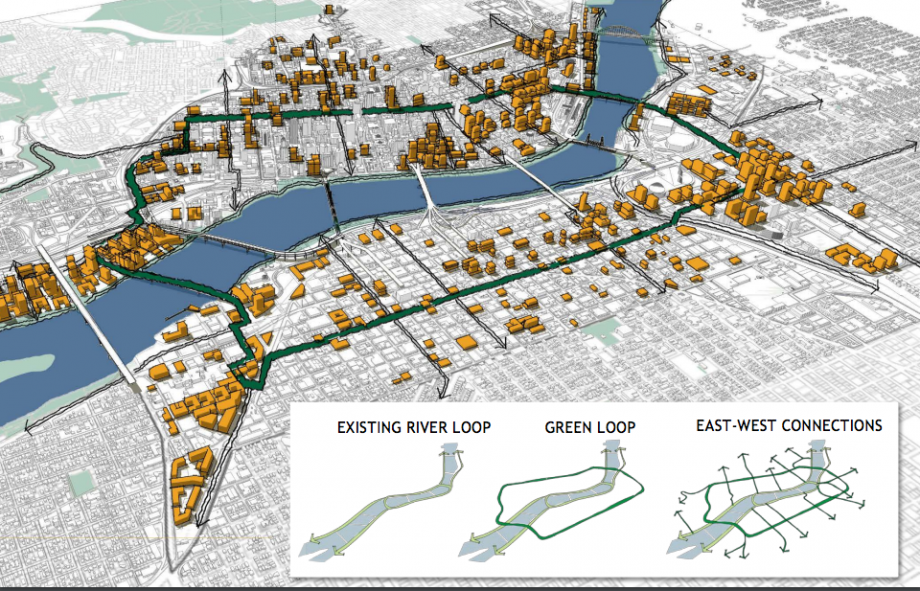 Portlanders are getting a chance to envision a linear park and active transportation corridor that could encircle their city. The Green Loop, an unfunded concept awaiting council approval as part of Portland’s Central City 2035 plan, would comprise 6 miles of parkway connecting neighborhoods on the east and west sides of the Willamette River.

On Saturday, part of the proposed route along Portland’s historic Park Blocks will be closed to traffic and transformed into a pedestrian boulevard. Not only will visitors be able to enjoy the car-free streets, but a pop-up exhibition will also invite them to use maps and models to design the Green Loop they’d like to see.

At about half the size of a typical Portland city block, the 24 narrow Park Blocks are just what they sound like: corridors of green spaces promenading through the city center. But the north and south segments are disjointed, says Lora Lillard, of the Portland Bureau of Planning and Sustainability. Though they all align with Park Avenue, the connection isn’t intuitive, and not all of the blocks are lighted to encourage cycling. If linked by a pedestrian and bike path, the Park Blocks would comprise about a mile of the Green Loop; the route would then continue, ultimately encircling the dense neighborhoods on both the east and west sides.

Last spring a competition invited proposals to kickstart what the corridor might look like. Untitled Studio, a group of architects and journalists who graduated from the University of Oregon together, received $20,000 to further their winning design. While the team did create conceptual renderings of some of the loop’s spaces and signage, they also focused heavily on methods for sourcing community input. At Saturday’s event, they’ll put some of those ideas to the test, asking Portlanders to design segments of the loop themselves.

“Our portion of the project was looking at unique community engagement strategy, thinking that if this really large public space project really does come to fruition, it really needs to be led, designed and developed for and from Portlanders,” says Courtney Ferris, a member of the Untitled Studio team. Her studio hopes to end up with a design that reflects the city’s many neighborhoods. Partly that’s practical.

“Since there are many districts in the center city and many street conditions, [the Green Loop will] take on many different forms,” Lillard says. Some streets, like those surrounding the Park Blocks, could become bike and pedestrian only. Other segments might just be low-traffic streets. And Untitled Studio wants to make sure neighborhoods have a say in what kind of transportation corridor and green space they most need.

They’ve developed two tools, both of which will be used by the public for the first time on Saturday: a 3D model of a streetscape, and a large map of the project area. On the map, visitors will be asked to plot out ideas, insights and potential barriers they want considered as part of the Green Loop design. Using the model, they’ll be able to snap in discrete pieces representing trees, bike lanes, water features and other street components.

Untitled Studio will also install temporary versions of some of their signage and wayfinding designs for the open streets event. And the group is creating a platform of turf, with real trees and shrubs, to set the stage for their pop-up exhibit. “We’re trying to get people to a place where they can engage with one another, engage with ideas about the loop, walk them through how they would best want their public spaces to be used,” says Ferris. All of their feedback will help inform an exhibit at spring 2017’s Design Week Portland. Untitled Studio is planning an interactive show there that builds upon these engagement tools to source even more public input for the Green Loop.

Actual implementation of a design is likely a long way off. The Planning and Sustainability Commission will hold work sessions on the plan this fall, and pass off their final version to the council after that. But Lillard says the loop furthers many of the goals Portland has already set forth: expanded park access, better health, more bike commuters. “We realize that we really need something that raises the bar if we’re really going to get more people using active transportation in their daily lives,” she says.

Ferris, too, is looking to the future of the city. “It’s really about being more intentional about Portland’s streets,” she says, which make up about 40 percent of the area of the central city. “How do we make the streets work harder with limited amounts of space and hundreds of thousands of people coming to the city in the next 30 years?”