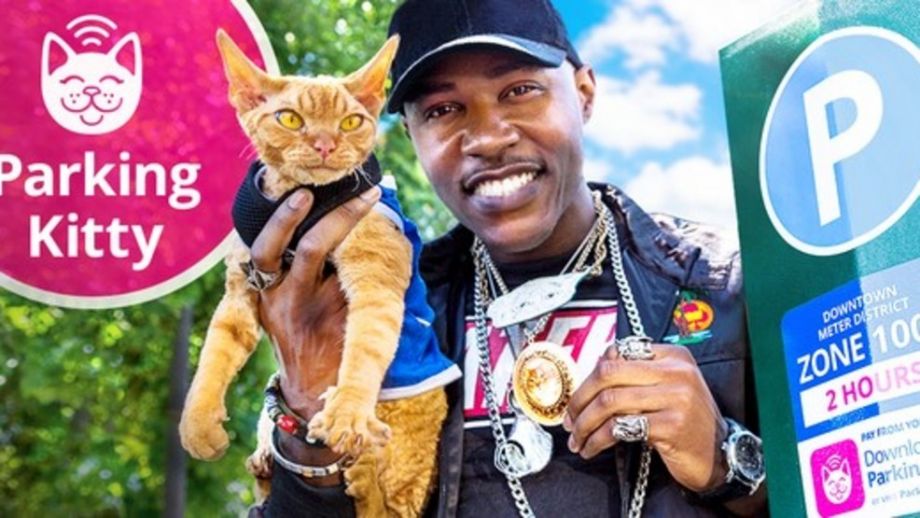 The Portland Bureau of Transportation would like residents to use its new paperless parking app, so it’s enlisted the help of the local “cat rapper.” Moshow the Cat Rapper is not a cat who is a rapper, but a rapper who deeply, unabashedly loves cats — and is not afraid to rap about them. There’s “CatNip,” which comes with a video featuring his four cats and “Cat World,” accompanied by a video in which they wear matching outfits. Moshow has also been known to drop the occasional PSA, like the one addressing why you shouldn’t de-claw your cats.

Moshow’s partnership with the Bureau of Transportation makes sense, because the app is cat-themed. Parking Kitty, as it’s known, is a play on the word “kitty” meaning fund of money, the Oregonian reported when the app went live in May. For 10 cents (on top of regular fees), it allows drivers to pay for street parking from their phones without having to walk to a kiosk or print out a paper slip. Drivers can add more time remotely, although they’re still governed by the time limit of the block where they’re parked. Because it’s a parking “kitty,” it emits a purring sound when users pay and a “meow” when they near their time limit.

The app was reportedly developed by Delaware company Passport Inc., which receives the 10 cent-per-transaction fee. The Bureau of Transportation spent roughly $5,000 (culled from parking meter revenue) to create the video promoting the app, which was released September 12.

The video features Moshow rapping from the driver’s seat of a Chevrolet Nomad, interspersed with footage of him dancing in front of the car with one of his cats, Ravoli. Sample lyric: “I’m gonna park my car with this parking kitty app / riding in my car with my cats while I rap.”

While not everyone loves the video with the same gusto that Moshow loves cats, the app could be a small step in streamlining an activity that’s bound to get tempers flaring in Portland: looking for on-street parking. As Jen Kinney wrote for Next City last year, Portland leaders have mandated relatively few off-street parking spots for new construction compared to other U.S. cities as the city has grown. For nearly 20 years, new buildings near frequent public transportation weren’t required to build parking at all — which was good for density, but not so good for those circling the block.