Portland Activist Testifies Before City Hall In Song – Next City 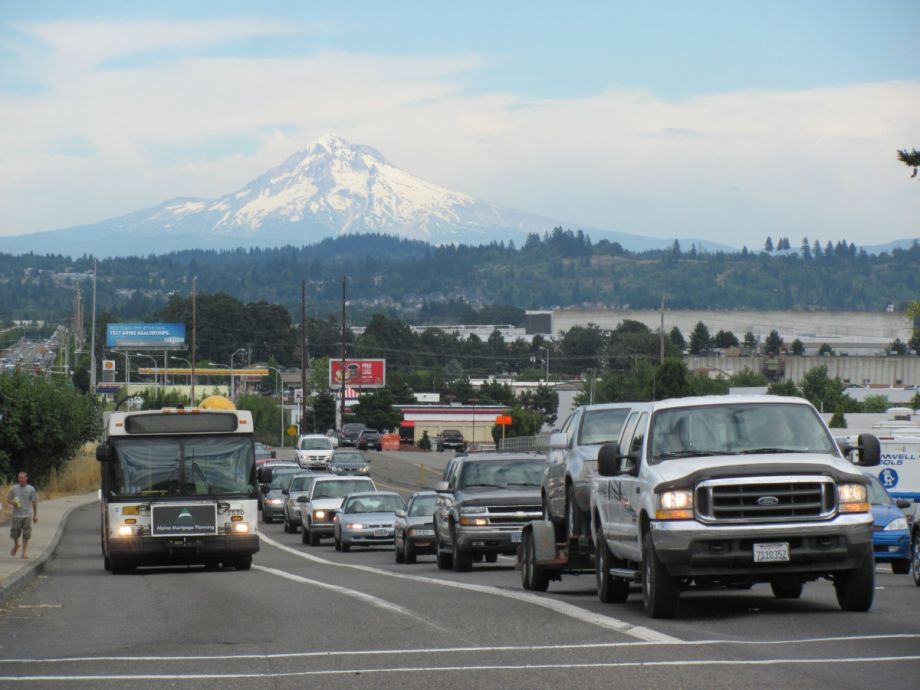 Traffic outside of Portland with Mount Hood in the background. (Credit: Robert Ashworth/Flickr)

A 73-year-old folk singer testified before the Portland City Council on a freeway construction project — through song.

Paul Rippey “serenaded the Portland City Council with a Bob Dylan or Pete Seeger-esque ditty,” the Oregonian reported, a musical protest to the Rose Quarter Improvement Project, a $450-million plan to add lanes to Interstate 5. It’s meant to make it easier to drive through the central city. Opponents point out that making it easier to drive will only encourage people to drive more — the phenomenon known as induced demand — and say that the money would be better spent on public transit.

Rippey’s song — and its refrain lamenting “induced demand” — is the latest testament to the Rose City’s long history of grassroots activism around transportation.

Portlanders, like many urban residents in the 1970s, revolted against a planned freeway that would have cut an eight-lane-wide swath through downtown, removing 1 percent of all the housing stock in the city.

Portland was also the first major U.S. city to intentionally remove and not replace an existing highway. In 1974 the city permanently closed Harbor Drive, a waterfront road that at the time was the busiest arterial in the city. It’s now a waterfront park.

More recently, a plan to build a new bridge over the Columbia River was killed in 2014, after skeptics argued that the $2.8-billion project just north of Portland would not adequately address congestion.

Transportation activism is so ingrained in Portland’s DNA that the Bureau of Transportation has been offering a free class in transportation since 1991, Bike Portland notes. The class, which costs the city $8,000 a year and has “graduated” 1,200 people, introduces residents to the “history, theory and victories” of transportation in Portland.

Class founder Earl Blumenauer, then Transportation Commissioner, now a congressman representing Oregon’s 3rd District in the U.S. House, told Bike Portland that he started the class because “About 6.5 minutes after I got the appointment from [then-Mayor] Bud [Clark], people had figured out that I could do something about where a stop sign could go….It was clear that a lot of what they knew about transportation wasn’t true. So I had been obsessed with an opportunity for anyone to do a deep dive to understand these dynamics.”

He created the class and promised that he would visit the final session, listening to ideas from its graduates. Many of those ideas have since been implemented, from small fixes like adding crosswalks at intersections deemed dangerous by students to creating PBOT’s parklet program.

As for the city council, Bike Portland reported that the commissioners appeared amused by Rippey’s efforts.

Here are the lyrics to Rippey’s 3-minute song:

In the 60s we built the interstate

And, now by god, they want to do it again.

But it should be clear the system is broken

And adding more lanes is just a futile token.

Because the thing we need to understand is induced demand.

But you can’t help noticing how much it’s slowed down.

Because if we build them they will come.

And the thing we need to understand is induced demand.

He tore down Harbor Drive.

And now Dennis Buchanan has gone away.

He blocked the Mt. Hood Expressway.

But don’t let us ever forget.

That these brave people took a lot of shit.

People of courage, people of goodwill —

Well I know we’ve got that kind of leader still!

But the thing they need to understand is induced demand.

But the way to get the highways off our backs

is with a comprehensive congestion tax.

And the thing we need to understand is, induced demand.

In the 60s we built the interstate

Let’s stop the madness now before it’s too late.

And the thing we need to understand is, induced demand.