Pop-Up Seating Around the World – Next City

Pop-Up Seating Around the World 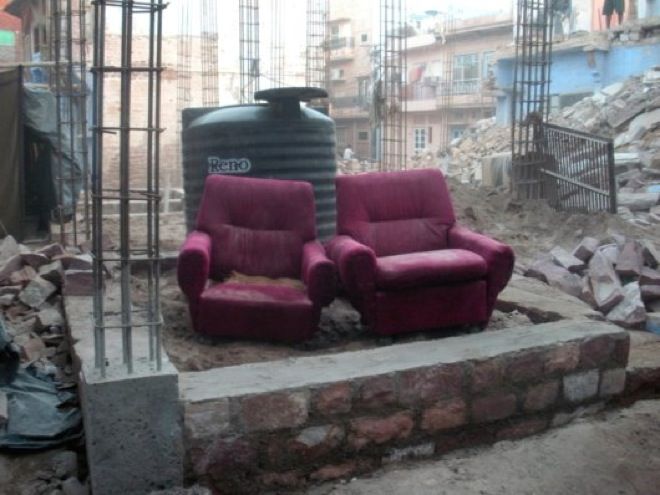 This past December, I was in Jodhpur, India for my cousin’s wedding. An avid photographer, I was trigger-happy with my camera. I shot every old building, every storefront, every relative, and even strangers I passed on the sidewalk.

And then one evening, as I was strolling down a windy unpaved path in the city, I stumbled upon these chairs: two big, red, plush velvet armchairs in the middle of a chaotic construction site.

I couldn’t explain why, but I just started laughing and could not stop. Where did the chairs come from? Who put them there? They looked like an elderly couple that had been on a long journey together and could never sit apart.

My family kept walking ahead, but I just stared and giggled and fumbled to find my camera and of course record their presence.

The next morning, the chairs were gone.

I began profiling photos of chairs I found on the streets of cities that I lived in or traveled to this January on CoLab Radio, and then other individuals started contributing their pictures too.

Like people, these misplaced chairs bring different personalities to the street and even tell stories about their respective neighborhoods. Sometimes they hang out on the sidewalk for a while, but most of the time they don’t linger long.

Because CoLab Radio was able to collect so many beautiful images of street chairs from all over the world, our first instinct was to curate a traditional photography exhibition for a larger audience to see. However, this idea posed two main problems:

As I was brainstorming a low-cost way to do something more with these chair photos and engage the photographers who contributed, I learned about the Knight Foundation’s Random Acts of Culture initiative, which funds flash mob performances of professional opera, dance, theater, et cetera in public spaces throughout American cities. The concept is to bring the arts to the masses and profile videos of these surprise pop-up events on the Internet for others to enjoy.

I thought, why not do the same with still art and use the pop-up show model to build community among CoLab Radio bloggers, photographers, and friends? The idea was simple: print the chair images poster size and mail them in tubes to different CoLab Radio members around the world.

No participant received his or her own chair photo in the mail. For example, New Orleans is hanging a chair photo from Jodhpur, and Mumbai is hanging a chair photo from Boston. Tomorrow and Monday, each participant will hang his poster in a public space and document his installation via photo and video, and all will be profiled on CoLab Radio. These posters are accompanied by a QR code so onlookers can access the blog series with their smartphones, as well as information to send their comments and get in touch via twitter (@MITCoLab, with hashtag #popupchair), email (colabradio@mit.edu), and telephone (011-1-617-286-6135).

This is a first-time experiment for CoLab Radio. A lot can go wrong here. The chairs we sent to Bogota and Moscow haven’t even arrived, though they were mailed out a month ago. Many people pointed out that these posters may not last long in public space. This made me realize that the pop-up show format mimics the identity of a street chair, which is transient in itself. Maybe the photographs will remain where they are hung for a while or maybe rain will wash them away or maybe someone will flier over them. All of these scenarios are fine, because they reflect what happens in cities and what happens to the street chairs we find.

October 22 was the launch of the International Street Chair Pop-Up Show. Over the next week, CoLab Radio will showcase street chair poster installations worldwide.

Last week, I was visiting New Orleans with my camera. As usual, I clicked away at the bright French quarter buildings, live oak trees, and old friends I had not seen in a while. I also decided to test-run hanging a street chair poster with a CoLab alum, Jackie Dadakis, in preparation for this pop-up show.

When we were finished, I stood back and observed. I thought the photo looked very nice at the bus stop, adding a bit of flare to the corner. I also laughed a lot. There was something very funny about this image now transposed in New Orleans.

The next morning, Jackie informed me the poster had disappeared.