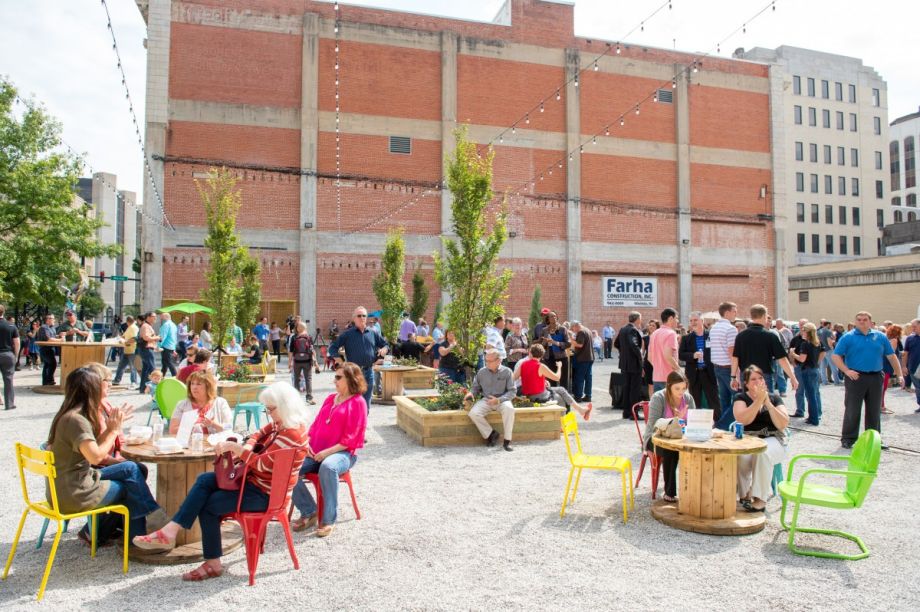 Sometimes, cities lack large greenspace not only for people but for wildlife — the insects, birds and other animals that make for a balanced ecosystem.

One answer to this issue? Pop-up parks, according to a new study examining their effects on biodiversity.

Pop-up parks can last a day, for weeks or on a permanent basis, but they are smaller green spaces, usually nestled in an urban area. They can be as small as the size of a planter box or span up to 30,000 square feet. (The median size of a park in the 100 largest U.S. cities is about 165,500 square feet.)

Pop-up parks do not replace their larger counterparts, but they are a relatively low-cost way to add green space to vacant or underutilized spaces. Cities around the world and U.S. have done this: Budapest, Hungary, Philadelphia, San Francisco.

“The more we learn about pop-up parks, we will know exactly what works where,” says Luis Mata, ecologist with the People, Nature, Place research program at Royal Melbourne Institute of Technology University’s Centre for Urban Research.

For the study, lead author Mata and his team studied Grasslands, a six-week park in Melbourne. Like many pop-up parks, Grasslands is not what many people envision when they think of greenspace. Artist Linda Tegg situated planters containing native grasses around the State Library of Victoria, recreating the grassland once found in Melbourne.

Mata and his team found out about the project and after speaking with Tegg, they studied the insect and spider activity at the pop-up park.

For six weeks, the research team tried to find every species of insect and spider at the site, eventually detecting 90 species during the six weeks. To compare, in a parallel study across the whole city of Melbourne, Mata found a total of 560 species.

“If you think about all those insects occurring across a whole city, the fact that there were about 90 just at this one small pop-up park, it’s very impressive,” he says.

That heightened biodiversity means an increase in pollination and nutrient cycling, an essential process in an ecosystem, Mata says.

Pop-up parks can also lead to more social cohesion. Mata says at Grasslands, people sat on benches in spaces near the planters and used it as a social space.

Pop-up parks can fit into areas that may not be large enough for a more traditional greenspace, as evidenced by the Pop-Up Urban Park in Wichita, Kansas. Wichita’s park began as a large hole in the ground, left behind after the previous property owner’s development plans fell through in 2007 with the start of the Great Recession.

This hole, on downtown Wichita’s main east-west thoroughfare, was the most frequent topic brought up by residents, says Jason Gregory, executive vice president of Downtown Wichita, a nonprofit focused on strengthening the city’s core.

So Downtown Wichita spearheaded a project turning that hole into a pop-up park. (Despite its name, the Pop-Up Park is now in its 4th year.)

“How do we make this a destination and change this whole concept of this being a place that the community essentially avoided because it was an eyesore?” Gregory says.

Wichita’s park opened in 2015 at only 6,000 square feet. It has artwork, chairs and planter beds with trees and flowers, in addition to food trucks regularly serving customers in the back of the park.

Though Downtown Wichita hasn’t done a formal study of biodiversity at the park, Gregory notes that, in an area that didn’t use to have plant life, he now sees bees and butterflies.

“I can tell you that that property was devoid of that before,” he says. “The addition of vegetation just softens it.”

The trees at the park create shade, so it isn’t as hot as a paved surface, Gregory says. “You have this kind of relief in the urban landscape.”

In addition to adding more nature into downtown Wichita, the park has also had social effects. Food is now closer by because of the trucks, so people walk to the park instead of getting in their car.

“You’ve just seen the vitality come back to the street,” Gregory says.

Every pop-up park is different. For example, Mata says a two-hour park won’t be ideal for increasing biodiversity, but it could provide shade or lead people to engage with nature at an underutilized space in the city.

“Not all of the functions are going to be able to be delivered at each pop-up park,” he says. “Each one has specific designs.”

Mata says in order for a pop-up park to have the greatest ecological effect, it should have elements for humans — benches, tables or anything that fosters interaction with other people — along with elements for wildlife. That means using organic materials as much as possible and adding lots of plants, especially native species.

“Ideally, you would like to strike a balance between the design elements that are for people to interact and to develop those social interactions,” he says. “You really want to carefully trade that off with the same kind of habitat, resource and food provision for non-human species, for the insects, for the birds.”