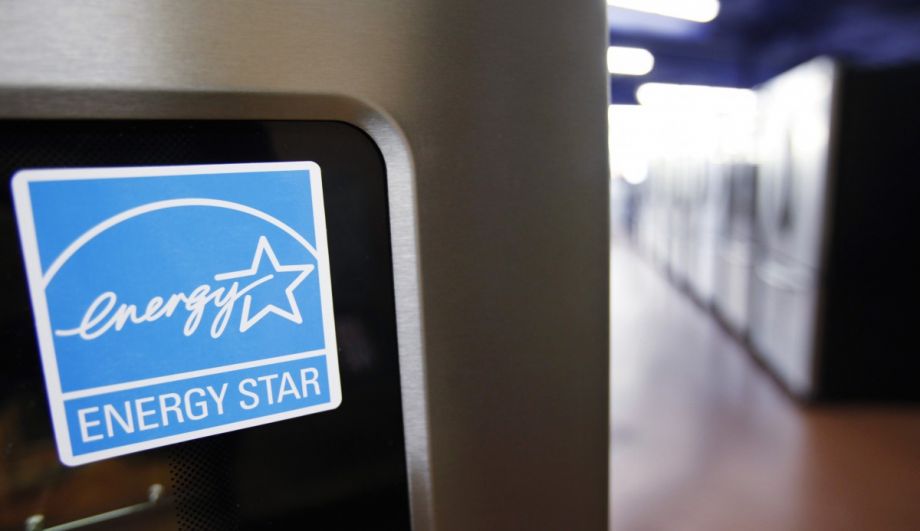 An Energy Star label is shown on an oven at an appliance store in Mountain View, Calif. (AP Photo/Paul Sakuma)

Andrew McAllister leads energy-efficiency solutions for California’s Energy Commission. The urgency of his work became even more apparent earlier this month, with the report from the Intergovernmental Panel on Climate Change (IPCC) issuing a dire call to action: humanity has roughly 10 years to slash greenhouse gas emissions if it is going to stave off a 1.5 degrees Celsius — 2.7 degrees Fahrenheit — temperature increase by 2050.

For McAllister, one means of reducing emissions is top of mind, a means that has the added benefits of boosting incomes for some low-income households and creating tens of thousands of new jobs: funding energy-efficiency improvements for multi-family rental properties across California.

“Multi-family is a large piece of our overall housing in the state, and it’s disproportionately low-income,” McAllister says. “It’s a big lift, no doubt. We are talking significant resources.”

Another timely report dives into just how much potential impact there is beneath that surface. Produced by the Natural Resources Defense Council and a number of other organizations working with the Energy Efficiency for All campaign, the “Plugging Into Savings” report shows how California can take a significant step towards ambitious emissions reductions goals by investing in energy-efficiency improvements for multi-family rental properties.

“We need every household to be getting 30 percent minimum of energy efficiency savings to meet our climate targets,” says Maria Stamas of the Natural Resources Defense Council. “This report shows that is cost effective and possible.”

The report specifically examines California’s Energy Savings Assistance Program, which provides energy-efficiency upgrades at no cost to households earning up to 200 percent of the federal level — about $49,000 a year for a family of four as of 2017. Roughly 13 million Californians now qualify for the Energy Savings Assistance Program, a third of whom live in multi-family rental housing, meaning they live in buildings of at least five units. The program costs an annual $375 million, funded by a surcharge on all customers of privately-owned electric utilities across the state.

But despite its wide potential reach, the program only serves approximately 300,000 residents each year, and multifamily tenants have not always participated at levels representative of their proportion of the population, the report finds. Out of its $375 million annual budget, the Energy Savings Assistance Program currently only spends about $20 million a year on energy-efficiency improvements for households in multi-family housing, according to the Plugging Into Savings report.

There are multiple reasons that the program has historically underserved eligible customers in multi-family properties, according to the report. There’s the disconnect between owners and renters depending on who pays for an efficiency measure upfront versus who benefits from the utility bill savings — if landlords pay electric bills, tenants don’t get the cost reduction benefits of buying LED light bulbs or from energy-efficient refrigerators and other appliances. Not to mention, more than half of California’s low- income population does not use English as their primary language, which makes those customers harder to reach for most efficiency programs.

“If you want to speak big picture,” says José Torres of the California Environment Justice Alliance, “it’s important to ensure that these resources get to low-income folks and environmental justice communities. And more often than not, those folks are going to be renters.”

Low-income renters tend to bear a higher cost burden for energy-inefficient buildings and appliances, according to Torres. “It makes sense for us to invest in places where people are having trouble paying their bills, but also in places are also going to be impacted the most [by extreme weather],” Torres says.

Even for the households it does reach, Stamas says, the program “tends to skim the surface of what’s possible in a household,” by sticking to modifications such as light bulbs and faucet aerators.

“The program isn’t offering very efficient hot water heaters, which are one of renters’ main sources of bills,” Stamas explains. “It’s not offering [energy-efficiency modifications] that could really make a difference.”

The report still ranks switching to LED light bulbs as having the biggest impact on reducing electricity usage. Some of the other recommendations include supplying residents in multi-family housing with advanced power strips that can sense when rooms are empty, reducing power drawn from the wall socket; providing eligible households with high-efficiency set-top cable boxes; and of course the high-efficiency gas water heaters.

The report calls for the Energy Savings Assistance Program to spend at least $90 million a year for ten years on energy-efficiency improvements in multi-family housing, starting in 2021. If the suggestions in the report are adequately funded, the report estimates that California’s Energy Savings Assistance Program could quadruple its energy savings compared to projected performance under the current program parameters.

More concretely, the report’s recommendations could result in an estimated $136 million to $200 million in annual utility bill savings, and 520,000 fewer annual metric tons of carbon emissions — the equivalent of taking 100,000 passenger cars off the roads for one year.

Through a survey of energy-efficiency industry employers in California, the report estimates a higher level of funding for the Energy Assistance Program would also lead to the equivalent of 6,000 or so full-time jobs created per year on average from 2018 to 2031. McAllister notes there are already roughly a half a million workers and counting in California’s clean energy industry.

At least some additional funding is already on the way for energy efficiency in multi-family housing. In addition to the existing the Energy Savings Assistance program, which primarily covers improvements within housing units, in 2016 the California Public Utilities Commission mandated that the state’s privately-owned utilities develop a new program valued at $80 million annually to improve energy efficiency in the common areas and entire buildings themselves of rent-restricted affordable housing, which includes many multi-family buildings across the state.

Ensuring that the entire population is able to participate in clean energy and energy-efficient technologies will “take bold effort,” McAllister says. “We absolutely will not succeed, and we certainly will not be able to consider the outcome a success if we have not brought along the least among us.”