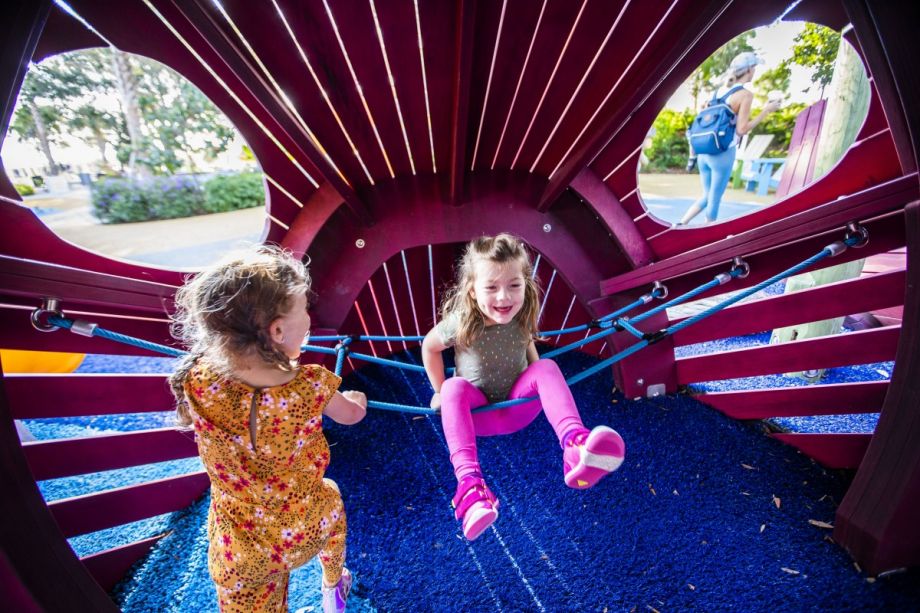 Children play at the playground at St. Pete Pier in St. Petersburg, Florida, which was designed by playground organization Earthscape as an inclusive space — one that is “wheelchair accessible from bottom to top.” (Photo courtesy Earthscape)

When it comes to providing play opportunities to children with disabilities, not all playgrounds are created equal. On most playgrounds in the United States, complex play structures with lots of stairs and uneven ground coverings like woodchips or gravel make play inaccessible to kids who depend on mobility aids like wheelchairs or walkers. Traditional swings or narrow slides are inaccessible to kids who need a caregiver’s support or the extra safety feature of a harness to use them.

While all new or renovated playgrounds must adhere to specific requirements stemming from the Americans with Disabilities Act (ADA), ADA compliance is only a bare minimum standard. An ADA-compliant playground might have an accessible entrance and transfer stations — spaces where a child in a wheelchair can pull themselves onto a play structure. But even with those features, many kids will still find themselves relegated to only parts of the playground and unable to enjoy many of its play features. The result is that crucial play opportunities remain limited or even unavailable to the more than seven million disabled kids in the United States.

Recognizing the limits of traditional playgrounds, some designers and city administrators have begun making efforts to go beyond basic access and ensure that more kids with various disabilities are included in playground design — through a philosophy of radical inclusion.

“There’s [always] a strong focus on ramps and stairs,” says Nathan Schleicher, lead playground designer at Earthscape, an organization that designs and builds custom playgrounds. “Ramps, stairs, and surfacing ended up being what define [an accessible] play space. But none of those things are play elements. We can do better than ramps, stairs, and surfacing. We can do better to be inclusive.”

A recent Earthscape project on St. Pete Pier in St. Petersburg, Florida, is an award-winning example of inclusive playground design. For the team behind the project, building an inclusive space meant making it “wheelchair accessible from bottom to top,” explains David Hugglestone, Senior Capital Projects Coordinator at the City of St. Petersburg.

The playground at St. Pete Pier has a mythical ocean and beach theme, complete with wooden sea turtles, larger-than-life starfish, and a pink and yellow kraken. “The design, from the beginning, included play opportunities both inside and underneath things like the kraken — its tentacles and its head,” says Hugglestone. “You can crawl into and under it. If you’re able to climb, you can climb the exterior of it. But even kids who may be in a wheelchair can be pushed in underneath.”

Jennifer Allen says that when her family visited the playground on vacation earlier this year, her 5-year-old son, who uses a wheelchair, navigated it easily. “It was a safe place for him to play tag or other running sports,” she says. Her two other kids, ages 4 and 9, loved the playground, too. For the Allens, “an inclusive playground means family play, [giving] my kids the opportunity to play together like siblings should.”

As cities focus on making playgrounds more inclusive, they’re also making them more inviting and more natural. The one-of-a-kind themed playground in St. Petersburg is also an excellent example of a welcoming community space. It has ample meeting places, complete with colorful oversized beach chairs for families to gather and lounge in, and was built using lots of natural materials, from its wood play structures to its rope climbing zones.

“The kids loved it and were wowed when they saw all the various spots to play on,” says Tonya Whitten, a local mother of three, whose 9-year-old and 5-year-old fell in love with the St. Pete Pier playground when the family first visited. While the older kids played, Whitten rested in a seating area with her 5-month-old baby. She says she looks forward to coming back as her youngest grows to take advantage of the scaled play zones that make the playground suitable for children of all ages.

Across the country in San Francisco, access, inclusion, and the incorporation of natural elements have gone hand in hand. There, Let’s Play SF!, a partnership between the San Francisco Recreation and Park Department and the San Francisco Parks Alliance, is hard at work transforming thirteen of the city’s most timeworn parks. Seven of the thirteen parks have been completed thus far, with the remaining six scheduled for completion by 2022. The renovated parks boast smooth surfaces for safety, accessible swings and sandboxes, double-wide slides, and abstract play structures built from natural materials.

The shift toward inclusive playgrounds has happened thanks in large part to collaborative and community-led design processes. “The most successfully designed playgrounds, in my experience, that tackle challenging accessibility issues, tackled them very early on in the design,” says Susanna Fraker, a project manager with the San Francisco Parks Alliance.

In San Francisco, tackling questions about accessibility meant partnering with an ADA coordinator and hosting a series of meetings where community members could give input on playground design throughout the process.

Similarly, in St. Petersburg, the city partnered with the local Committee to Advocate for Persons with Impairments (CAPI), a group committed to ensuring the voices of the disability community are represented in city projects.

“The committee was asked to review the design of the playground and all equipment and features and provide input and ideas,” with the goal of ensuring “equal access, equal participation and equal enjoyment” to all members of the St. Petersburg Community, explains Lendel Bright, ADA and Diversity Coordinator at the City of St. Petersburg and liaison to CAPI.

The challenges that both cities faced were what Fraker calls the “push and pull” of balancing the goal of radical inclusion with things like space and budget constraints. Wide pathways or transfer stations that make playgrounds maneuverable for wheelchair-users also take up a lot of space. Added accessible entrances and the one-of-a-kind equipment that make inclusive playgrounds so wonderful can also be expensive. “The fun part,” says Fraker, is when “given the space and budget constraints, designers come up with creative and fully-integrated solutions. It’s not a burden to the project. If anything, it adds play value.”

At the playgrounds in both St. Petersburg and San Francisco, efforts to ensure radical inclusion have been more than worthwhile. “The minute we opened up [the St. Pete Pier Playground] and saw kids playing on it, it was worth every penny,” says Hugglestone.

“I think it is extraordinarily wonderful that there is a playground for every child [in St. Petersburg],” says Whitten. “It is a very rewarding feeling to see your child having the time of their lives playing on a playground and every child deserves that.”