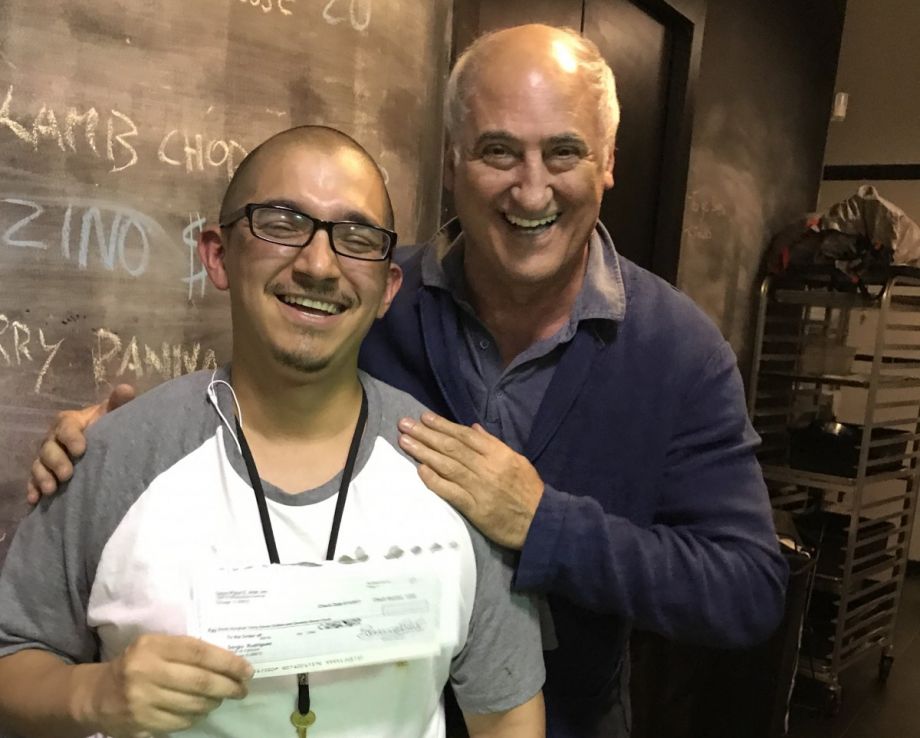 Sergio Rodriguez, left, works for chef and restaurateur Bruno Abate, right, in Chicago. Rodriguez learned how to cook in the Recipe for Change program in Cook County Jail.

A career in the culinary arts might not have been in the picture for Sergio Rodriguez had he not been sent to jail.

The 22-year-old Los Angeles native was on his way to Ohio to deliver two-and-a-half kilos of heroin when he was picked up by police in Chicago. He wound up in a Cook County Jail cell.

That’s where, about 10 months into his stay, Rodriguez met Bruno Abate, a chef and owner of an Italian eatery in Chicago called Tocco. Abate had just started a new cooking class in the basement of Division XI, a maximum security facility where about 1,500 people are incarcerated. Abate hoped the program would provide some purpose for the inmates accused of nonviolent crimes as they awaited trial.

“I didn’t even know you could make pasta by hand,” says Rodriguez, now 26. He’s living in a halfway house in Chicago, where he is serving out the remainder of his sentence.

Handmaking pasta wasn’t the only skill he picked up.

Over the next year and a half as his case made its way through the court system, Rodriguez also learned how to make marinara sauce using fresh basil and tomatoes, ricotta cake — a favorite of one of his three daughters — and thin-crust pizza. He was eventually sentenced to serve at Stateville Correctional Center, outside Chicago.

When Rodriguez was granted work release, he wrote to Abate and asked for a job.

The father of four is about a month into his new gig as a pizza chef at Tocco, which is in Chicago’s trendy Wicker Park neighborhood.

When his work release concludes in 2019, Rodriguez hopes to take his newly acquired kitchen skills and apply them to opening his own restaurant in California near his family.

This is the type of outcome Abate was hoping for when he launched the cooking class, Recipe for Change, in 2014. The goal: Teach inmates the basics of Italian cuisine that they can use for employment, or simply to cook a healthy meal for their families.

The classes were modest to start. Abate had no funding and his first 20 pupils (including Rodriguez) did not have access to a proper stove. So the chef started by introducing the students to produce like zucchini and basil, ingredients that some didn’t know.

Now with the help of donations from individuals and foundations, Recipe for Change operates on an annual budget of about $300,000. Its kitchen is equipped with a gelato maker, espresso machine, stainless steel tables and all the utensils one would find in any commercial-grade kitchen — though knives are chained to the countertop.

Around 200 inmates have gone through the program since its beginning, and several have since landed jobs in Abate’s kitchen.

In a neighboring room, there’s also a pizza oven that garnered news headlines in April. That’s when the program started a pizza delivery service through which inmates can have freshly made pies delivered directly to their cells. Prices range from $5 for a basic margherita to $7 for a specialty pie, and customers use money from their jail commissary accounts. The revenue generated from sales goes back to fund the program.

Plans are also in the works to develop a food truck where participants can work once they’re released.

Recipe for Change is part of a growing movement that emphasizes jobs training for incarcerated people. According to the Vera Institute of Justice, more than 20,000 people were incarcerated in jails in Illinois in 2014.

Long before Abate’s culinary program got off the ground, the Cook County Jail — the largest county jail facility in the U.S. — has had the Urban Farming Initiative. Inmates grow vegetables that are used by farmers markets and restaurants throughout Chicago.

“The sheriff strongly believes that we need to send them back to a better place than when they entered and programs like these and treatment go along ways toward doing that,” says Cara Smith, of Cook County Sheriff Tom Dart’s office.

The city of Detroit last year launched a pilot project using a $4.5 million grant from the U.S. Department of Labor to train inmates in transition in a number of in-demand fields, including the culinary arts.

Marc Djozlija, a chef-partner at the high-end Wright & Company, says he was asked to provide feedback for the 120-hour curriculum and is working with the city’s workforce development department on an email list that will inform Detroit-area restaurateurs who are looking for help filling back-of-the-house jobs about inmates who’ve gone through the program and will be released and are ready for employment.

“Everyone [in the restaurant industry] is looking for somebody, always, constantly to fill jobs,” Djozlija says. “If we’re doing good at the same time, then we’re fulfilling both needs.”

For Abate, inspiration for Recipe for Change came one sleepless night with his television tuned into a program that talked about the impact incarceration has on children.

“If we don’t break the cycle of violence, we are damaging the children, we’re denying a child the possibility to be a child,” Abate says.

While outcomes for Recipe for Change graduates have been mixed — in addition to getting those letters informing him of former inmates’ successes, Abate also hears from students who’ve wound up back in the system — watching students like Rodriguez grow in the kitchen is proof to the chef that his work is having an impact.

For Rodriguez, breaking that cycle is forefront on his mind when he’s not at work.

“Anything I do now, I do for my kids,” Rodriguez says. “Back then, it was drinking, drugs, making bad decisions. I wasn’t much of a father. Now, it’s all about my kids.”