Op-Ed: Smoothing Out Pittsburgh’s Remodel from Black to Green – Next City

Op-Ed: Smoothing Out Pittsburgh’s Remodel from Black to Green 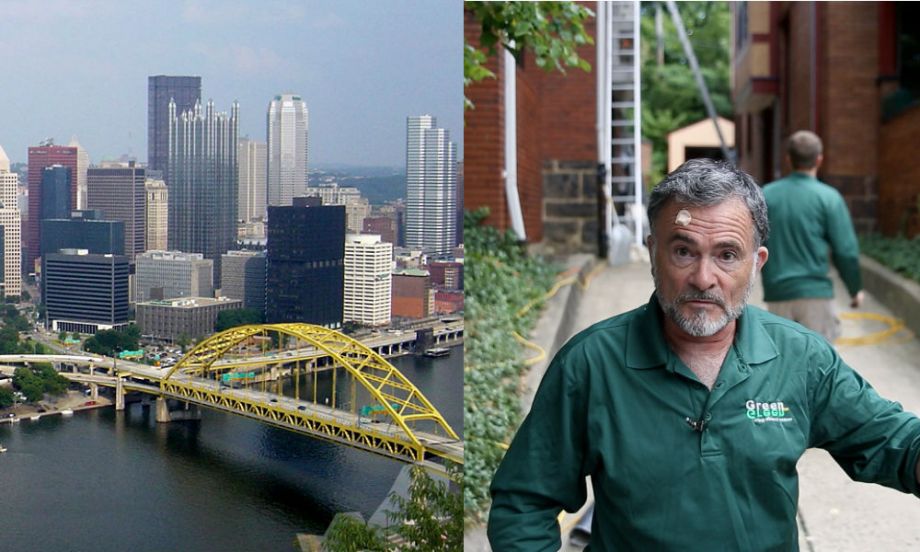 A century ago, Pittsburgh was a booming magnet for job seekers. Most were employed in industries that made yesterday’s Pittsburgh one of the country’s dirtiest cities, a place where burning coal covered buildings in soot and darkened the midday air. Today, Pittsburgh has cleaned up. Several local organizations are working to make the once-blackened city a leader in green jobs and long-term careers that contribute to a cleaner environment.

These grassroots efforts seek to build on well-intentioned state initiatives that weren’t fulfilling their promise. In 2009, Pennsylvania rolled out a statewide workforce training program focused on weatherization and energy efficiency. The program earned national recognition, but those who enrolled faced a roadblock: There was no demand for workers with this skill set, leaving many out of work.

Where some might have seen a frustrating dead end, Pittsburgh resident Tim Carryer saw an opportunity. He had worked for years as a high-end remodeler and saw firsthand how much waste occurred in the industry. So Carryer started his own company that specialized in efficiency upgrades with a whole-house approach.

He also founded Green Over Green, a hub for home energy businesses and professionals. In 2010, he set up Diagnostic Energy Auditors of Western Pennsylvania, which connects members with training as well as industry and community opportunities. The goal is to build a regional network of businesses and organizations in the industry that can collaborate and help each other succeed.

Despite his efforts in workforce development, Carryer grew increasingly concerned that the industry was not fulfilling the promise of green jobs. He realized that no amount of training will create green jobs without market demand. In short, the industry had a marketing challenge.

Attempting to fill this gap in publicity, Carryer took part in a roundtable that brought together dozens of stakeholders in the energy efficiency sector, including non-profits, policymakers and funders, to identify ways to cultivate demand and create real jobs.

At the roundtable, Carryer met Andrew Butcher, co-founder and CEO of the non-profit GTECH Strategies (Growth Through Energy and Community Health). He and Butcher shared the same goal, but Butcher’s vision was even broader. Butcher raised money for a marketing program based on community outreach and was building a network within each community, playing matchmaker by connecting neighborhoods to resources that addressed their needs.

Carryer recognized the power of GTECH’s mission and strategy. When he heard they were looking for an energy director, he jumped at the opportunity. Carryer, 66, now spends his time working to fight pollution and spur the green economy in Pittsburgh.

At GTECH, he leads the Reenergize Pittsburgh initiative, which taps into the group’s strong network of small businesses, non-profits, utilities and weatherization contractors to identify and address neighborhood energy needs. The goal is to create green job opportunities for local workers while bringing energy, health and cost benefits to Pittsburgh residents.

The organization works from the ground up, identifying and recruiting energy ambassadors from 16 neighborhoods to help identify what each community needs. GTECH collaborates with churches and community organizations to build demand for and deliver energy efficiency. Then the initiative draws on its coalition members of building analysts, weatherization experts and utilities to implement energy-saving measures in single-family homes.

GTECH aims to slash carbon pollution in Pittsburgh by 200 metric tons during its first-year pilot effort, and then grow into a long-term program. Carryer aims to reduce neighborhood energy use by at least 20 percent, with the possibility of eventually bringing this number up to 40 percent.

But it’s not just an environmental initiative. The Allegheny County Health Department has shown interest in the health benefits of efficiency upgrades, which can help decrease asthma triggers such as moisture, dust and drafts.

Carryer is building a strong network through fixing buildings and joining training programs that focus not just on weatherization, but on marketing efficiency. His hope is for the network to perform high-quality work that builds trust and reaches at least one-third of Pittsburgh’s homes.

Pittsburgh should serve as a model for other cities in spurring energy efficiency. The region is already ahead of the game, Carryer points out, because it has transitioned from a jobless coal town to an inclusive city with booming economic development. His vision is of a city with green career ladders for disadvantaged residents, a thriving energy efficiency sector and healthy, prosperous communities.

Green for All is a grantee of the Surdna Foundation.