Photos: The Differing Destinies of Elevated Urban Parks – Next City 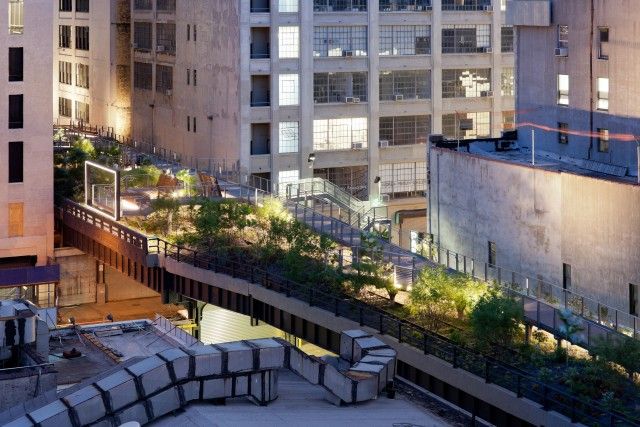 This week’s Forefront story deals with the kinds of urban parks that may soon wind above a handful of cities across the country. David Lepeska looks at the Chicago’s Bloomingdale Trail, slated to become the second green space in the U.S. that’s been converted from an old railroad trestle, to see how urban leaders are viewing potential elevated parks, how to find the money to build them, and how these parks will function in the cities they serve.

Many observers will compare future elevated parks to the High Line in New York City. As the first such green space to open in the U.S. — the Promenade plantée in Paris predates it by almost two decades — the High Line has set an inevitable, though perhaps unfair, standard. While the designers of the Bloomingdale Trail have said they will focus on transportation and neighborhood connectivity, the High Line functions primarily as a tourist destination and a magnet for investment. Indeed, $2 billion has reportedly gone into the surrounding West Side Manhattan area since the park opened in 2009.

The before-and-after photos below demonstrate the High Line’s evolution: Before, an unused mile-long piece of infrastructure, overgrown with vegetation; now, a manicured green space with a walkway running through and above it.

Gallery: High Line Before & After

The Bloomingdale Trail is at least 18 months away, with an opening planned for the fall of 2014. But early renderings show that Chicago’s effort will likely result in something different. Designers at the firm Michael Van Valkenburgh Associates aim to create a space that can help neighborhood residents move from point A to point B. There will be lush areas with art installations where visitors can dawdle, but these will take a back seat to a planned concrete bike path and a softer walking and jogging path.

“It’s really going to be a neighborhood asset rather than a signature downtown attraction,” Will Rogers, president and CEO of the Trust for Public Land, a green space advocacy non-profit, tells Lepeska. “The Bloomingdale is going to provide parks and green space for neighborhoods that desperately need it, and bicycle access for people going downtown. It’s a different kind of investment.”

Three graphics below show how the Bloomingdale looks at present and designs that have been proposed for its future. Note the presence of cyclists, who are disallowed on the High Line.

Looking further afield, both Philadelphia and St. Louis, Mo. are sitting on their own derelict railway lines. A number of organizations have been formed with the intention of reimagining Philly’s Reading Viaduct and the St. Louis Trestle. What will come of these ideas remains to be seen, but the model may lie in Chicago rather than New York.