Before & After Photos: Pretty Philly Storefront Makeovers – Next City 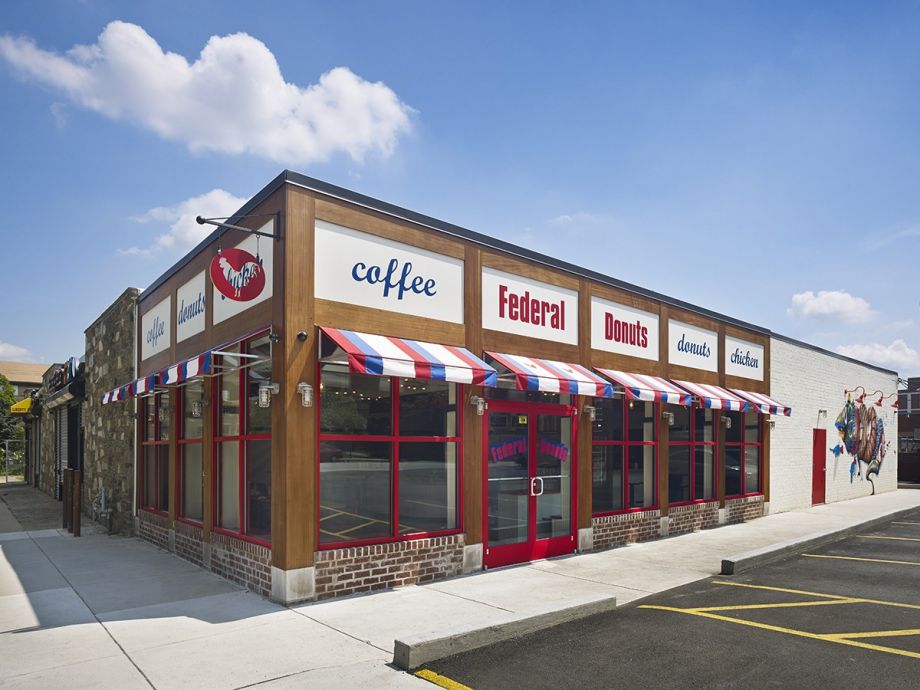 When Patricia Blakely, executive director of the Merchant’s Fund, showed a slide of Chhaya Cafe, the response was immediate. “Beautiful,” one woman sighed. “Yeah, that looks really nice,” another replied.

They were reacting to the difference that the new, wide picture windows made. “It’s like a new dress,” Blakely told the audience gathered for a look at rehabbed Philadelphia storefronts. “Nothing better than a new dress. Makes you feel prettier and skinnier and people say, ‘Oh wow, what did you do different?‘”

At the 2014 Storefront Challenge Awards Presentation, it wasn’t uncommon to hear the kind of ooohs found at a successful fashion show. (Garage doors, brass lamps, recessed entrances with an FDR-era feel — all very in right now, by the way.) But the mix of people present — CDC staffers, Commerce Department higher-ups, store owners, architects, artisans and so on — was a constant reminder that more was happening here than style. The Storefront Challenge is thrown biennially by the Philadelphia Department of Commerce and the Community Design Collaborative. This year, they received 80 nominations for projects around the city.

The local CDC in Tacony, a working-class Philly neighborhood, has backed 14 storefront renovations over the last two years. Alex Balloon, the CDC’s commercial corridor manager, said that another 11 storefronts are currently in the design phase. How was the Tacony CDC able to accomplish so much so quickly? “We’ve been pretty relentless in terms of working and encouraging business owners to participate in the [Storefront Improvement] Program,” said Balloon. “Now that we have all this visible change that people can see everyday, they want to get involved and get in on it too.”

The commerce department’s Storefront Improvement Program covers 50 percent of costs on designated corridors throughout the city, up to an $8,000 cap on a single address. (While many of the nominated storefronts had sought SIP reimbursements, projects that hadn’t were welcome to compete.) According to the department, SIP has awarded $2.5 million to 337 businesses, attracting another $4.3 million from private investors. “With some things, it’s hard to draw a cause and effect, but this one’s pretty easy,” said Alan Greenberger, Philadelphia’s deputy mayor of economic development and director of commerce.

The diversity present provided a glimpse of how different businesses and neighborhoods have gone for a new look.

Valley Green Bank, the winner of “Best Overall” for its one-year-old South Philadelphia branch, had modernized a brick, corner-side former WIC office. The building is now blue with marigold accents; a decal takes up an entire floor-to-ceiling, second-story window; a longer planter and new pavement outside make the entrance resemble the tip of a plaza.

The Center for Art in Wood filled one of its exterior walls with an intricate mural and took the award for “Paint That Pops.” Amatullah’s Treasures, an accessories boutique, was recognized for its thoughtfully arranged window displays. An old elevator factory, which now houses specialty roasters ReAnimator Coffee, underwent a dramatic facelift, nabbing the “Extreme Makeover” award.

ReAnimator co-owners Mark Corpus and Mark Capriotti say that they’re hoping to reach millennials staying in cities who, like them, were looking for a homegrown version of the roasteries found in cities like Portland, New York and San Francisco. “For us, it was like, why shouldn’t Philly have this?” explained Corpus.

Balloon picked up awards on behalf of two business owners who he supported and won “Corridor Catalyst” himself. In Tacony, the CDC chips in another 35 percent of makeover costs so that, with SIP’s 50 percent, proprietors only wind up paying 15 percent of the costs. Tacony CDC works with the Community Design Collaborative to provide free storefront designs to interested business owners, to reduce expenses further. “You have to show up every day to people’s business to hear their stories, look at the grandchildren and really establish a personal level of trust,” added Balloon.

Looking for ideas for your storefront or corridor? Check out this slideshow of makeovers below.