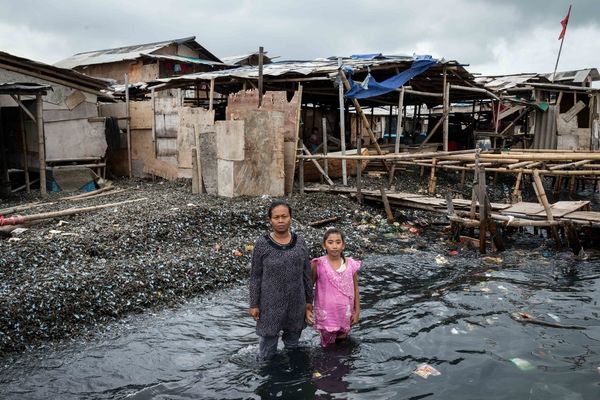 The first thing that strikes you in Jakarta is the traffic: Motorbikes, cars and rusted minibuses flock day and night through the streets of this messy Indonesian metropolis. Traveling across Jakarta, even short distances, could mean spending hours in nearly unbreathable air.

The second thing that strikes is the lack of sewage and wastewater treatment systems. Ditches exposed and covered run along the roadside, collecting waste from homes, offices and industry before pouring into waterways across the city. When wastewater reaches the coast, it is black and polluted. A dreadful odor envelops slums like Muara Angke, a coastal community of poor fishing families who build their shacks on the waste from the processing of mussels.

Greater Jakarta is a delta city of more than 10 million people, crossed by 13 rivers and hundreds of canals. It is estimated that about 2 million people commute daily to downtown Jakarta from the suburbs. The metropolitan area is the second largest megacity in the world (after Tokyo-Yokohama), home to an estimated 28 million people and comprising the satellite cities of Tangerang, Depok, Bekasi and Bogor. Data shows that Jakarta’s population grew by 34.6 percent between 2000 and 2010, ranking it among the top 10 of the world’s fastest growing megacities.

Together with pollution and population growth, climate change poses a threat to Jakarta and its people. In an August study published in the journal Nature, scientists write that Jakarta is one of the globe’s most vulnerable cities in terms of flooding.

Coastline areas like Muara Angke, Pluit and Tanjung Priok regularly suffer from seasonal floods, monthly high tides and rising sea levels. Mainly composed of slums, these areas lack protection against high water or floods. Jakarta once benefitted from the natural protection of mangrove forests around its borders, but these are long gone. As recently as 1998, mangroves occupied 44,000 hectares in Jakarta, West Java and Banten. By 2009, they had been reduced to just more than 11,000 hectares.

Today only 300 hectares of forest remain in Jakarta itself, and these face continual threats from pollutants and garbage. Moreover, slums now surround the northward reservoirs, which are supposed to receive water flooding from rivers and canals. In fact, slums are replacing the role of mangroves, as they act as a sort of urban, inhabited buffer to the floods. Locals are getting used to have their shelters inundated.

According to a 2009 study, the number of residents living in poverty counts around 340,000. This is a conservative figure, though, as more than 20 percent of Jakarta settlements are slums, and there is a large share of undocumented immigrants. The number of poor people, then, might reach well beyond that official number. The poor usually work in informal sectors as drivers, scavengers, navvies and so on.

Slum areas occupy chiefly riverbanks, like those on the Ciliwung. Shanties weaken the riverbanks and their inhabitants live with inadequate infrastructure, unhealthy surroundings and low accessibility to basic needs. They use the river water not only for sewage but also for bathing and washing clothes. Due to illegal residential development, the Ciliwung has no overflow basins. Flood enters directly into houses on its banks.

All photos by Elisabetta Zavoli

A typical modern and fast-growing Asian city, Jakarta is a place of contrasts. No more than a crumbling wall might separate glassy luxury apartments from informal settlements. Elite and basic housing stand side by side. Indonesia is Southeast Asia’s largest economy, with a growth of 6.5 percent in 2011. Jakarta is the biggest economic hub of the country, counting alone for 7 percent of the Indonesian GDP. Most of the new housing supply is targeted to the rich. Gated communities and high-rise apartments contribute to widening social segregation.

Over the years, policymakers have responded to increasing demand by converting green space and wetlands into housing, commercial and industrial uses. In 1965, green areas still covered more than 35 percent of the total city area; today, they only cover 9.3 percent. This, despite a national law mandating that provinces have green space covering 30 percent of their land.

The more Jakarta grows upward, the more it sinks because of land subsidence. Chaotic high-density development also contributes to the overuse of ground water for both household and industrial purposes. As underground seawater intrusion increases in and around the city, it is foreseen that in 10 to 15 years Jakarta will face groundwater scarcity.

Currently, the Jakarta Capital City Government doesn’t have a policy specifically tailored to climate change, though it does have policies on disaster mitigation. After floods this past January, which killed 26, displaced 100,000 more and caused 4.3 trillion Indonesian Rupees in damages, the government has begun to clear illegal settlements on riverbanks and around the north reservoirs, moving people to new popular housing.

But this is far from a permanent solution. As written in the Nature study, “failing to adapt is not a viable option in coastal cities. The estimated adaptation costs are far below the estimate of aggregate damage losses per year, in the absence of adaptation.” How Indonesians will cope with the many challenges facing their capital city is still an open question.

Elisabetta Zavoli is an Italian photojournalist based in Jakarta, where her work primarily focuses on environmental and social issues connected with climate change. She has been published in the Financial Times (UK), The National (Abu Dhabi), Repubblica (IT), Wired (IT), WirtschaftsWoche (Germany) and other publications.