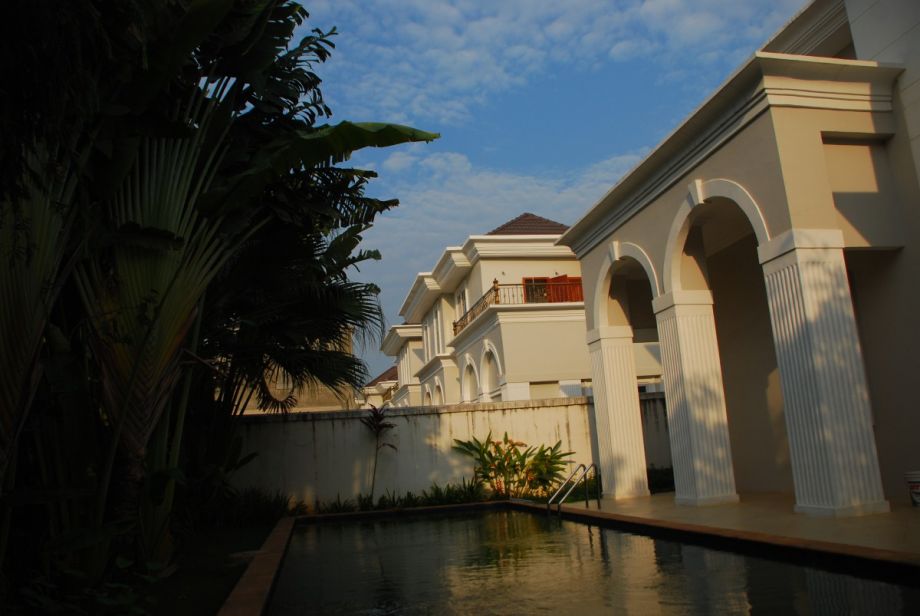 Five years ago, this site on the northern fringe of Phnom Penh, Cambodia’s capital of two million, was sparsely inhabited swampland. Today, it is metamorphosing into a paradise for the wealthy and a monument to a new mode of Cambodian middle-class living. By the time construction finishes around 2020, Grand Phnom Penh International City will include 4,500 houses, half-a-dozen residential apartment towers, a golf club and a water park. Residents will have access to an international-grade school and a state-of-the-art hospital.

“It’s like a luxury city,” says Heng Channith, a sales executive in the air-conditioned marketing office, scanning a laser pointer over a 1/1000-scale display model, an expanse of green felt and tiny Monopoly-board mansions. “We have the best facilities. We have villas, we have flats, we have shophouses… We have public gardens. And it’s not as crowded as Phnom Penh.”

Grand Phnom Penh International City, a joint venture between the Indonesian developer Ciputra and YLP, a local construction firm, is just one of several “satellite cities” that have sprung up in Cambodia’s fast-growing capital in recent years. As a new wealthy class rises in one of Asia’s poorest countries after decades of war and upheaval, many have sought a quieter life in gated communities far from the dust and SUV snarls of the downtown districts. According to local realtor CBRE, seven “satellite city” projects are scheduled for completion around the Cambodian capital over the next 10 to 15 years, covering nearly 8,000 hectares — about 12 percent of the city’s total land area. In 2005 one city official described the urban ideal as “a city with no smoke and no sound.”

In a country where a fifth of the population still lives on less than $1.33 per day, it’s a privilege that doesn’t come cheap. Villas at Grand Phnom Penh International City range in price from $120,000 for the most basic models to $850,000 for one of the palm-engulfed “golf villas” backing onto the 18-hole course planned by Nicklaus Design, a firm established by American golfing great Jack Nicklaus. The names of the homes are signifiers of old-world sophistication: Tuscany, Venezia, Versailles. At the “Chateau” model home, I walk through rooms filled with rococo symbols of wealth — divans, tapestries, tasseled curtains, Renaissance prints, filigreed bedheads. In the upstairs study a full set of the 1971 Encyclopedia Americana shares the shelves with a few faux-Asian antiques; a window looks out onto the smooth greens of the Grand Phnom Penh International Golf Course.

A few blocks away, I meet Neang Ren, 61, a retired education ministry official, who recently moved into a $400,000 Chateau villa fronted by scrawny jacaranda trees. “This place is beautiful and spacious. The second thing is security – it is very safe,” he says with satisfaction, sitting on a plastic chair like he’s back in his village, a checked krama scarf wrapped around his waist. Three months after moving in, Ren and his wife Ruom Saroeun have made their new suburban oasis home. Plants hang from the cast-iron fence in empty milk formula tins; a Toyota Tundra pickup sits in the drive, next to a golf buggy. The neighborhood is green and quiet, except for the birds. “Everybody makes the same decision to come here,” he says. “It’s a perfect life.”

The interior of a “Chateau” model home.

While satellite cities have become an established part of the new suburban landscape, urban planners say these mega-projects have been poorly coordinated with the growth of the city as a whole. Each development is its own well-planned island. Outside the stallion-gates of Grand Phnom Penh International City, asphalt and concrete quickly give way to the gravel and potholes of Sen Sok district. In 2008, Frederic Mauret, a French urban planner who helped advise Phnom Penh Municipality, warned about the traffic jams, flooding and other consequences of isolated satellite city developments. “Those mega projects think only about the development in their locations, turning blind eyes on the development of the whole city,” he said.

Willem Paling, formerly of the University of Western Sydney, who has conducted research on urban growth and development in Phnom Penh, describes city planning as “a disjointed, halting process” driven by massive private sector investments, mostly from Asian countries like China and South Korea. In 2005 French urban planning consultants drafted a 2020 Master Plan for Phnom Penh, but it has never been implemented. In its absence, projects are often announced by senior government officials like Cambodia’s long-serving prime minister, Hun Sen, before they are formally approved by the city authorities. “Enforcing adherence to the Master Plan is difficult when the capital associated with large projects is so attractive,” says Paling.

With little effective regulation, some satellite city developments have had more acute social and environmental effects. In 2007, Boeung Kak, a 133-hectare lake in central Phnom Penh, was quietly leased to the Cambodian senator and oligarch Lao Meng Khin for the construction of a housing and commercial project. Since then the project has displaced more than 4,000 families, and according to many urban planning experts, the filling of the lake is likely to exacerbate flooding in a city where much of the land lies below the level of the Mekong River during the monsoon season.

On Chroy Changva, the peninsula that divides the Mekong River and the Tonle Sap, riverbanks have collapsed as sand has been dredged from the Tonle Sap to fill land for a $3 billion, 956-acre project known as “Chroy Changva City, City of the Future.” Diamond Island, a lemon-shaped island that is home to housing developments including Elite Town, a gated township of pastel-yellow villas, has involved evictions and land reclamations that could change the water flow, eroding the riverbanks. As Pen Sereypagna, an architect and urban researcher, puts it, “Planning is focused on private dreams.” Everything else is left to its own devices.

The entrance to Grand Phnom Penh International City. Urbanists worry that the health of Phnom Penh itself is being neglected while private cities like this one flourish.

With Phnom Penh’s population growing at a rate of around four percent per year, urban planners say the city risks developing into a few islands of well-planned suburbia in a dusty cityscape hampered by inadequate infrastructure. “By creating these kind of projects, you put a lot of limitations on the city’s development,” says Piotr Sasin, an urban planner who heads the Czech NGO People In Need. “Phnom Penh used to be called the Pearl of Asia; there’s very little of that left.” Paling says that for satellite cities to succeed, they need to be part of an overarching plan. “Broader investment in infrastructure is essential, not just in these isolated pockets, cut off from the rest of the city,” he says.

Outside, back on Grand Boulevard, Cambodian officials take turns smashing golf balls from a driving range out over a rectangular lake, aiming for island greens with pennant flags. At a playground nearby, 32-year-old Khon Phana cradles his 15-month-old son as he watches his nephews and nieces playing on the slides and other play equipment. Phana lives in Sen Sok, outside the gates of this new community, but with few other public parks in Phnom Penh, he brings his children to play here. “People outside can bring their kids to play, they don’t mind,” he tells me, as green-shirted workers with brooms maintain the blemish-free streets. Would he like to live here one day? “I couldn’t even dream about it, it’s too expensive for me,” Phana says. “But of course I would, if I had the money.”