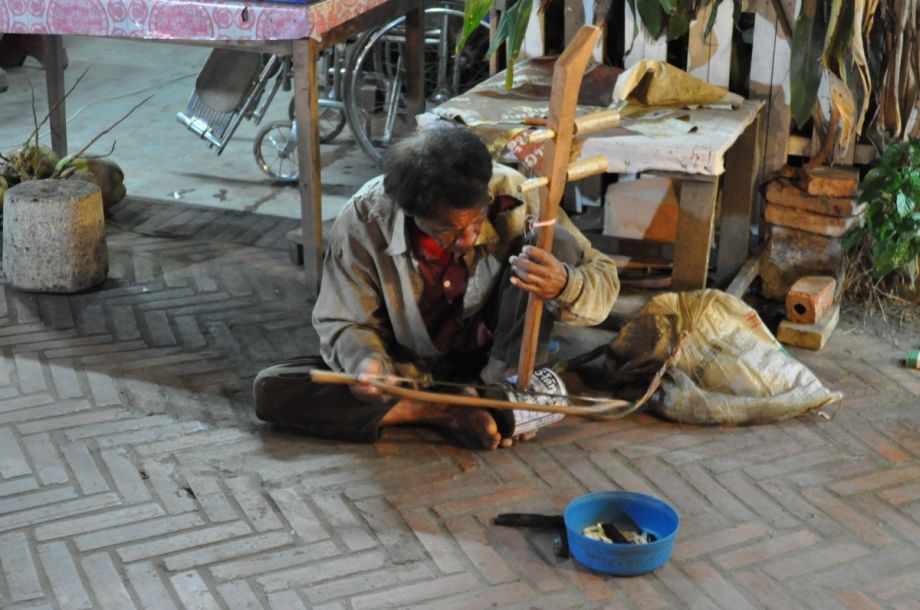 In 2012, the authorities in Cambodia’s capital hung up large banners proclaiming it “The Charming City.” This new branding campaign capped off a decade in which Phnom Penh had grown rapidly from an impoverished third-world city into a small island of middle-class modernity. Over the past ten years, as Cambodia’s small economy has boomed, the city has grown by leaps and bounds. Malls and satellite cities have risen. Rutted roads have been repaired. Overgrown parks have been tamed and sculpted. Sisowath Quay, running along the Tonle Sap riverside, was once a strip of dirt where people sold beer by candlelight; today it boasts a handsome paved promenade lined with palm trees.

But Phnom Penh’s urban beautification drive has not been without its discontents. On June 9, the city’s deputy governor Seng Ratanak ordered a roundup of beggars, homeless people and children hawking newspapers and flowers at traffic lights in the center of town. The very next day, several dozen rubbish collectors and homeless people were hauled away in police trucks. Many more hid to evade capture. “They are at risk of labor exploitation and human trafficking, and we need public order,” Ratanak told the Phnom Penh Post.

Last month’s street sweeps were just the latest part of a long municipal campaign to clear the streets of beggars and purge central Phnom Penh of “unattractive” human elements — a policy that has also involved the eviction of informal urban communities from valuable inner-city land. Traditionally, street-sweeps have preceded international summits and other events that place Cambodia’s capital on the world stage. Ahead of ASEAN Summit meetings in late 2012, street peddlers and beggars were rounded up and sent to “vocational training” centers run by the municipal Department of Social Affairs. One city spokesman said the sweep was necessary to make a good impression on world leaders. He explained: “If the leaders from across ASEAN and the world see beggars and children on the street, they might speak negatively to the government.”

The attitude of city officials is best summed up in their frequent use of the word anatepadei, meaning “anarchy,” to refer to the urban poor and other “undesirables.” For the Phnom Penh municipal government, urban development consists in large part of policing the line between the chaotic and the “ordered,” by which they mean the division between the sprawling outskirts — a ring of poorly planned districts where urban amenities are patchy — and the more prosperous inner city.

Many of those who find themselves living or selling goods on Phnom Penh’s streets are the cast-offs of Cambodia’s economic revolution: recent rural migrants driven from their ancestral rice-farming villages by landlessness and poverty. Sixty-three-year-old Hao Samut, who sells jasmine garlands at the intersection of Monivong and Charles De Gaulle Boulevards, came to the city six years ago from southeastern Prey Veng province after an injury to her leg prevented her from working in the rice paddies. She took a room out near the airport for $10 per month, borrowed a few dollars from her sister to buy some jasmine wreaths and began hawking them at traffic lights. On a good day she works eight hours and takes home 20,000 riels (about $5 USD). “I can make money for living, but not for saving,” she said, fingering wreaths of fragrant jasmine bound with red strings. “I don’t want to be a beggar.”

While authorities claimed people rounded up in last month’s raids ended up at specialized NGOs offering vocational training and child protection services, human rights monitors later reported that many, including children as young as seven, ended up at the Prey Speu Social Affairs Center, a notorious facility that has been marred by allegations of abuse. Prey Speu is just one of a dozen vocational centers run by the municipal Department of Social Affairs, which purport to offer vocational training but have drawn criticisms due to their frequently appalling conditions. Am Sam Ath of the human rights group Licadho condemned the alleged use of the Prey Speu Center to house homeless people and street sellers. “They are not criminals,” he told local media.

Though she avoided being swept up in last month’s sweep, Samut has been detained twice by the authorities and once spent a night at Prey Speu. “They didn’t give me much food to eat; there was no water, no electricity, no bathroom,” she told me as the traffic rushed by on Monivong Boulevard. “I don’t want to go to Prey Speu [again]. If they arrest me, please just shoot me dead on the spot instead.”

Bushra Rahman, a spokesperson for the UN Office of the High Commissioner for Human Rights in Phnom Penh, which has monitored the recent campaign of street sweeps, said the agency was “deeply concerned” about recent developments. “People who have committed no crime should not be detained,” she said. “Persons who find themselves living on the streets often lack opportunities or have other reasons that led them to that situation, which will not be solved by rounding them up in ill-equipped facilities.” Though UN workers are not granted regular access to the Prey Speu Center — now rebranded the Porsenchey Vocational Training Centre — Rahman said that one recent visit made apparent that the facility was “drastically under-resourced and ill equipped to address the needs of many of the people resident there.”

At the park near Phnom Penh’s old market, Lim Sreng and her companions sat in a circle and talked about their run-ins with the city authorities. Sreng spends her days collecting anything she can sell: scrap metal, beer cans, plastic bottles. She lives in the park and sleeps with a tarp when it rains. She’s lost count of the number of times she has been detained, and has seen the inside of Prey Speu on numerous occasions: “Too many people live in Prey Speu. It’s very bad conditions. They give [inmates] just a bucket to go to the bathroom. They lock them in the building.”

Heng Sophea, 29, another rubbish collector from central Kampong Thom province, also escaped the dragnet. He said the authorities had made it clear that the homeless have only a marginal place in Phnom Penh’s paved, ordered, “unanarchic” future. “They said they wanted to clear the city; they said they want a beautiful city,” he told me. “But Cambodia has a lot of beggars. They can’t do the same as in Thailand.”