Philly’s Sidewalks to Get Public WiFi (and Digital Ads) 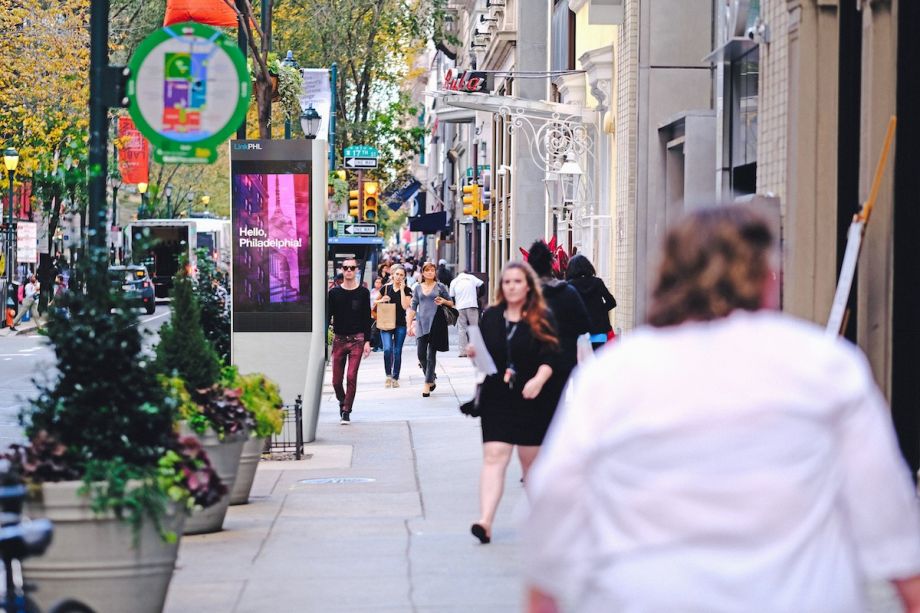 The sidewalks of Philadelphia will soon be studded with tall, slender digital kiosks, emitting public WiFi signals, inviting passersby to make free phone calls and blanketing the streetscape in ever more digital advertising.

On Nov. 1, the city’s Office of Transportation and Infrastructure Systems (OTIS) announced that the Philadelphia Art Commission, the city’s design review board, had voted to approve the LinkPHL program, which will bring 100 kiosks to streets in Center City and University City. The program — pronounced, improbably, “Link Philly” — is the third of its kind from tech company Intersection, a firm that runs similar programs in London and New York. In addition to WiFi and phone calls, the kiosks provide device charging, wayfinding information, access to emergency services and “contextual advertising,” according to an Intersection press release.

Depending on your perspective, LinkPHL and its sister programs represent either an innovative way to address issues of unequal access to digital tools, or a sophisticated new front in the battle to bring commercial advertising into the public realm. Probably it’s a bit of both.

“LinkPHL will be an investment in Philadelphia’s future, creating 21st-century infrastructure in the heart of the city,” Mayor Jim Kenney said in a press release. “But more importantly, the kiosks will provide the sorts of modern services that our residents and visitors need as they work and play in the city — at no cost to taxpayers.”

It’s true that the kiosks will be free to taxpayers, and in fact the city stands to reap a revenue benefit from them as well. Under the agreement with Intersection, the city will get half of the ad revenue generated by the kiosks, after the company recoups installation costs, with a minimum yearly payment of $450,000.

And it’s also true that internet access hasn’t been extended to all Philadelphians equally. Twenty-seven percent of low-income residents had no broadband access in their homes, according to a 2013 analysis by the Pew Charitable Trusts. Each Link sends a WiFi signal that reaches a radius of 150 to 300 feet, according to an Intersection spokeswoman.

Hannah Sassaman, policy director for the Media Mobilizing Project, which fought for greater public benefits when the Philadelphia-headquartered internet service provider Comcast was renegotiating its franchise in the city, says the kiosks will be useful to tourists but also to people struggling with homelessness. But they won’t resolve the most important issues of the digital divide, which is access to high-speed internet at home.

“It is important for us to fight the digital divide with a variety of tactics in our streets and in our common spaces, but also in our homes and our communities, and we have to remember that access to the internet every day becomes more and more of a human right,” Sassaman says. “We have to ensure that we focus on the corporate infrastructure that divides us from that right, that puts the profit of themselves and their shareholders above our human right to communicate, and that we do not settle for second-, third-, or fourth-class internet based solely on our ability to pay or access to political influence or power.”

But at least at first, the LinkPHL kiosks will be placed mostly downtown, and not in the neighborhoods where the majority of low-income residents live.

Chris Puchalsky, director of policy and strategic planning at OTIS, acknowledges that the Links are meant primarily to serve tourists, and to give local nonprofit arts organizations discounted advertising space. LinkPHL is taking a lesson from the early stumbles of LinkNYC, when residents complained about users setting up shop at the Links for hours at a time, and sometimes using the web browsers to watch pornography. The Philly kiosks will have no web browsers and no flat surfaces to rest items on, according to Puchalsky.

The LinkNYC program is now widespread, with around 1,200 active kiosks around the city. Around 2.8 million people have registered for the public WiFi through the Links, according to Stephanie Raphael, of NYC’s Department of Information Technology & Telecommunications. Every week, 75,000 phone calls are made through the kiosks, she says, and around 1,500 emergency calls. The kiosk program seems poised to spread to other cities.

In Philadelphia, one group that has been fighting the proliferation of billboards in the city for decades tried to argue a case against the kiosks before the Art Commission and in a letter-writing campaign to the mayor. The opposition, organized by Scenic Philadelphia, argued that the kiosks amount to visual pollution of the sidewalks and a potentially dangerous distraction to drivers. In an emailed response, Mayor Kenney said that there have been no complaints about safety with other Link programs, and that the city is committed to decluttering sidewalks in other ways.

The point-by-point argument went back and forth, but eventually the Art Commission voted to approve the proposal 7-1. At any rate, anti-billboard advocates are used to losing, even when they’re right.

“No matter what public benefits this proposal is touting,” the advocates for public space at Scenic Philadelphia wrote in a letter it asked its supporters to send to the mayor, “the bottom line is that this is an attempt by a private company to profit from access to Philadelphia’s public spaces.”