Philly Has a Land Bank, But the Tough Choices Have Only Just Begun – Next City

Philly Has a Land Bank, But the Tough Choices Have Only Just Begun 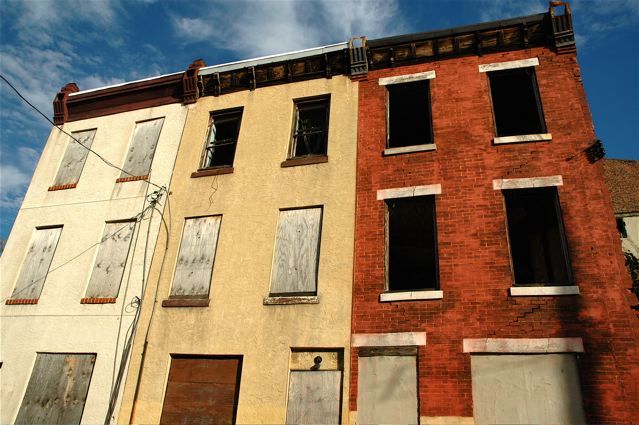 City council members lined up behind the podium on Monday as Mayor Michael Nutter reflected on the hard work of the bill’s champion, Councilmember Maria Quiñones-Sánchez, the eventual cooperation of Council President Darrell Clarke, and the tireless efforts of the motley band of advocates who pushed the council to suspend its provincial politics for just long enough to create a one-stop shop for city-owned and tax-delinquent properties.

The major negotiating parties, including Quiñones-Sánchez, Clarke and a couple of community stakeholders, took turns recounting the bill’s rocky political journey, reminding attendees of the problems it was designed to fix.

“This has to be a game changer for the city of Philadelphia,” Quiñones-Sánchez said, “if we’re going to create the jobs and the opportunities for small businesses, and redevelop from neighborhood to neighborhood not for just those who want to come, but for those who live here.”

The political love fest was total as Clarke, who had been targeted in the home stretch for inserting process hurdles that advocates believe weakened the bill, acknowledged the sausage-making that had occurred and gave a shout-out to his detractors.

“I want to thank the advocates who had to dust me up every now and then, but it’s all good” he said, “because it’s all about process.”

That anything passed at all was itself a major accomplishment. Reform fatigue has noticeably begun to set in after an 18-month stretch of land use politicking, beginning with the passage of a new zoning code in 2012 and culminating with Monday’s bill signing.

The land bank bill is fairly complex, but it essentially does three things:

It was difficult to find any land bank supporters in attendance who would indulge in some skepticism about the likelihood of achieving these goals as envisioned. Members of the Land Bank Alliance did, however, come prepared with a set of demands.

The first is a permanent board of directors. An interim board has been appointed to get the process started, but the bill requires a board with five members chosen by the mayor, five chosen by City Council, and one chosen by the combined group. Four members will have to be community representatives from civic associations or non-profit organizations with expertise in community development, affordable housing and related subject areas.

Advocates want the real board seated before too many policy decisions get made. They also want as many properties as possible transferred from the four city agencies into the land bank.

Beth McConnell, policy director for the Philadelphia Association of Community Development Corporations (PACDC), pointed out that not all city properties will necessarily make it into the land bank, though the coalition will notice if too many are withheld.

“They might hold some back, because the Redevelopment Authority might be working on a sale or process or transfer,” she said. “But what we don’t want is a situation where members of City Council and all the different agencies are holding back all these properties and not putting them in the land bank. Because then we might end up with five different city agencies that hold property.”

The final ask is for start-up funding. The land bank is designed to be self-funded eventually — options include retaining the proceeds from property sales or retaining the tax increment collected from sold properties for up to five years — but many expenses will be front-loaded into its first year. It will need around $5 million from the city in the 2015 budget, according to McConnell.

Where that money will come from is anyone’s guess, but PACDC has some suggestions.

“There are federal Community Development Block Grant funds, and the Housing Authority apparently paid the city a settlement of about $6 million a couple years ago that has to be spent on either blight remediation or affordable housing,” McConnell said. “The city hasn’t spent that money yet, so that’s a potential source of revenue. “

Advocates expressed cautious optimism that the land bank board, the Vacant Property Review Committee and district council members would all work together in good faith. Implementation politics, after all, differ from the politics of passing a bill through City Council, though the faint outlines of some policy disagreements are already coming into focus.

For many advocates, the Vacant Property Review Committee remains a concern. Clarke effectively controls its agenda, and many view it as a gratuitous third hurdle for land buyers to clear, on top of a land bank board vote and a City Council vote.

Asked what residents concerned about political obstacles should do, Anne Fadullon, president of the Building Industry Association of Philadelphia, counseled vigilance.

“Continue to be aware, and don’t go away,” she said. “There’s been some specific things in the legislation about making VPRC more transparent. There’s no reason those things can’t happen tomorrow. And so I would ask the advocates to track that and make sure that’s happening.”

A major problem that has vexed would-be land buyers is the lack of a means to track individual statements of interest in city land, as well as the city’s responses. Agencies won’t even think about releasing land parcels without a letter from a district councilmember, and there’s presently no way to know how many statements of interest simply disappear into trash cans for political reasons.

Rick Sauer, PACDC’s executive director, said activists and journalists will be able to keep track of property requests in the land bank’s annual report. “There’s going to be annual reporting on what’s actually happened to the property requests, and what properties have gone out the door for what purpose, at what cost,” he said. “An annual report is required to City Council, and also an annual update to the Strategic Plan.”

But isn’t an annual report too infrequent for those trying to monitor councilmembers’ behavior in real time?

“It’s really important as part of this new system to have a very transparent tracking process,” Fadullon said. “So if a request never goes anywhere there’s an easy and accessible way to figure that out and see, ‘here’s what happened for the last 10 proposals that were submitted for this site or in this area.’”

How transparent to make the process is just one of many highly charged choices facing the new land bank board. But even though there will likely never be as many supporters packed into City Hall as there were in the lead-up to the key votes, the broad coalition of non-profits and advocacy groups behind the land bank isn’t going anywhere.

“It’s going to take a lot of effort, and we’ll be monitoring the process,” Sauer said. “Hopefully there are not going to be any obstacles that come up to prevent properties from moving forward, but if there are, we’ll keep pushing to make sure it’s done effectively.”