Philly Keeps Its Second Casino License. Now What? – Next City 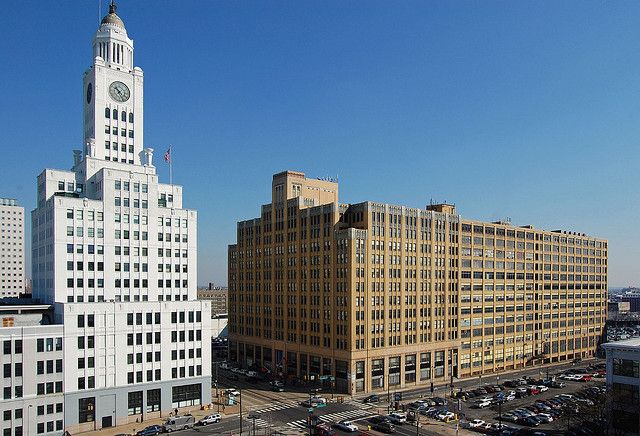 The former Inquirer building (left) would serve as the anchor for Bart Blatstein’s entertainment and casino complex. Credit: Ian Freimuth on Flickr

Philadelphia’s coveted second casino license has passed through several hands: It slipped through developers’ fingers when the gaming board revoked the ill-fated Foxwoods casino license two years ago, and was nearly released for statewide bidding this year. When the Pennsylvania Gaming Control Board announced last month that Philly could keep its license, sighs — of both relief and distress — could be heard across the city.

Facing a November 15 deadline to submit applications for the license, developers — including Bart Blatstein (of Northern Liberties fame) and New York’s R. Donahue Peebles — are working hard to piece together deals. Other potential competitors include the Goldenberg Group of Bluebell and Philadelphia-based Parkway Corporation.

Since the contentious opening of Philadelphia’s first casino, SugarHouse, the city has reaped the benefits of the casino’s business, and expects to receive $86.3 million in statewide gaming revenue this year. Altogether, Pennsylvania casinos have generated more than $10 billion in revenue.

As Pennsylvania casinos face growing competition from neighboring states, some argue that a new license would only take customers away, including the nearby Parx in Bensalem, Harrah’s Philadelphia in Chester and Valley Forge Casino — not to mention SugarHouse in Fishtown. Among the opponents of the license, Republican Sen. John C. Rafferty is seeking to create a bill that would eliminate the second Philadelphia license altogether, reducing the number of available Pennsylvania licenses from 14 to 13.

When it comes to the actual plans for Philly’s new casino, details remain murky. Peebles has reportedly considered locations in Center City and along the Delaware River waterfront, near SugarHouse. The Goldenberg Group may eye its lot at 8th and Market streets — at one time, the designated spot for a planned Disney amusement park hatched by Goldenberg — as a possible casino location. Parkway Corp. could consider its parcel at the corner of North Broad and Callowhill streets, now a surface parking lot.

Of the potential bidders, Blatstein has prompted the most speculation with his purchase of the former State Office Building and its neighbor: The dove-white 18-story building that formerly housed the North Broad Street headquarters of The Philadelphia Inquirer and Philadelphia Daily News.

According to Blatstein, the Inquirer building will serve as an anchor for a sprawling $500 million casino and hotel complex, complete with a rooftop village that is “reminiscent of old Europe” and will span several buildings. Sixty feet above the ground, winding streets will weave through a collection of two- and three-story buildings housing retail and restaurants. A retractable glass roof will shield the village from inclement weather, and a “sky bridge” will connect two sections of the village over 15th Street.

When Philadelphia architecture critic Inga Saffron caught wind of these plans, she took to Twitter and wrote, “Blatstein has lost his mind.”

The entire complex would stretch a length of Callowhill Street, from North Broad to 17th Streets, and would include movie theaters, sports and performance venues, shopping and spa services. At 117,000 square feet, the proposed casino would be smaller than SugarHouse Casino, and Blatstein wants everyone to know it.

“Unfortunately, Philadelphians think that my new casino will be like SugarHouse,” Blatstein told the Metro. “Only 15-percent will be devoted to the casino. Families will not have to walk through the casino to get to the restaurants and theater. I am building a place where I want to go.”

With the planned location of his casino in close proximity to schools and churches, Blatstein’s vision will certainly be challenged. Opinions are divided concerning whether the casino would be a boon or bane to North Broad Street, a stretch that many consider to be on a slow but steady path toward revitalization.

Much has changed in the eight years since developer Eric Blumenfeld proposed his idea to transform an empty building at 640 North Broad into luxury apartments. Then, Blumenfeld recalls, North Broad Street was considered “an empty god-forsaken corridor.”

The surprising success of 640 Lofts has encouraged Blumenfeld to launch other projects in the immediate area. In 2009, Blumenfeld began construction on two properties down the street from 640 Lofts, transforming a former car dealership into a catering hall and an old dress factory into 101 additional apartment units.

North Broad Street has benefited from a variety of projects in recent years, including the expanded $786 million Convention Center and the $7.5 million Lenfest Plaza, complete with Claes Oldenburg mega-sculpture. The area is now home to restaurants by Marc Vetri and Stephen Starr, and will host the Pennsylvania Ballet’s headquarters once construction on a new facility is complete. Temple University is currently in the midst of construction on a mixed-use complex at North Broad Street and Cecil B. Moore Avenue that is slated to open in 2013. 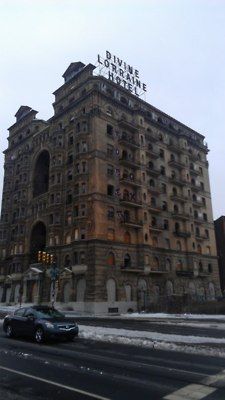 The city and developers have struggled to reach agreement about the fate of the Divine Lorraine. Credit: Matt Bevilacqua

Though North Broad has received a number of shiny additions, large portions of the street are lined by vacant lots. The crumbling Divine Lorraine Hotel looms above the pavement — a boarded-up, graffiti-cloaked reminder that disputes between developers and the city about its fate have as yet led nowhere.

As North Broad hangs precariously in transition, some worry a casino would only stunt the area’s growth. Marc Vetri, one of the few chefs who have ventured to North Broad, has reached out to City Council and other elected officials to prevent Blatstein from including the casino in his development plans.

“It’s a shame,” Vetri told the Philadelphia Business Journal. “There is study after study that casinos in cities do not provide sustainable economic development. It’s a fact. A hotel, retail…that’s awesome. But why would you want to stick that there? It doesn’t make any sense.”

A study by the Econsult Group (and commissioned by Blatstein) draws different conclusions, and found that his project could potentially generate $1 billion in additional economic development and activity for the increasingly cash-strapped city, and create hundreds of new jobs. As creating jobs and tax revenue is emphasized in these tough economic times, building a casino nestled off North Broad may become a question of practicality.