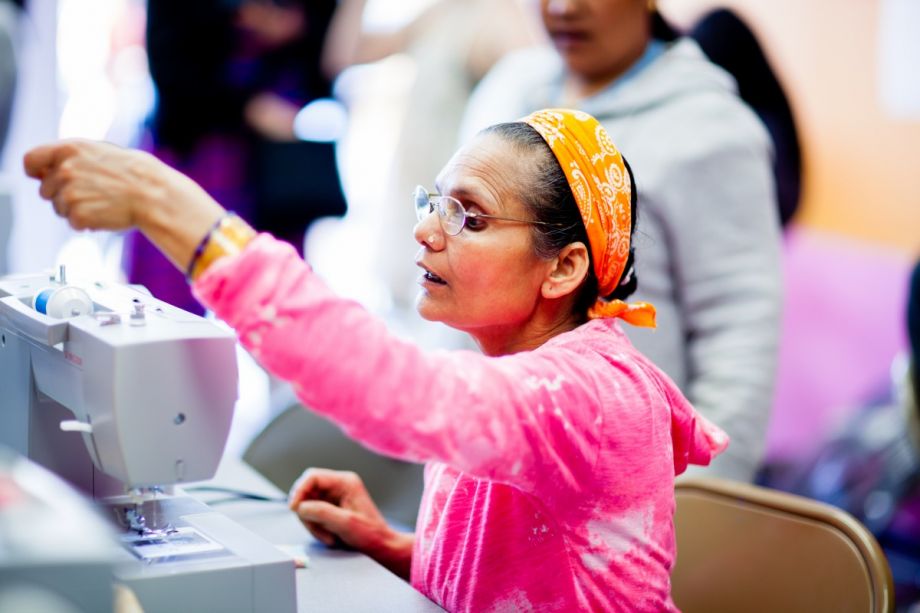 Victoria Wright, Senpai & Kohai, Wild Mantle — these are some of the fashion brands that have hired sewers from the Refugee Women’s Textile Initiative, and put their work in stores. Last month, the Philadelphia-based RWTI won a grant for nearly $19,000, as part of StartUp PHL’s effort to spur entrepreneurship in the city. (The initiative is a collaboration from the commerce department and the Philadelphia Industrial Development Corporation.) In this latest funding round, six organizations received awards ranging from $6,000 to $25,000.

Entrepreneurship wasn’t even in RWTI’s sights in the beginning. The group grew out of Philadelphia Burmese Women’s Initiative two years ago, and the seeds were sown when Jessica Lee, an organizer and Ph.D. candidate in social work at Bryn Mawr College, polled women to find out what activities they’d like to undertake. With sewing classes as a top result, Lee began to search for an ideal classroom. Enter designer-teacher Rachel Ford, and her school MADE Studios. The initiative has expanded beyond proper sewing, to a curriculum around textile arts, with artist Shira Walinsky bringing in local designers to collaborate with participants on weaving projects. But Ford has her eye on small-batch manufacturing.

“What I’ve come to realize in my own world is that everybody is a designer,” says Ford. “Everybody ultimately gets to a place where they want to scale things and hire other people to do their sewing. And as it is now, there’s really a lack for [that workforce.]”

Multiple reports show that demand, jobs and wages for sewers have risen across the U.S., leaving many factories desperate for skilled garment makers. “[That sector of workers] withered away and nobody noticed,” a former CEO of a leather products brand told the New York Times. “Businesses stopped investing in training; they stopped investing in equipment.”

Add to this, pricing shifts in fashion manufacturing globally. “Post 2005,” Jane Collins, author of Threads: Gender, Labor, and Power in the Global Apparel Industry, explains in an email, “after the end of the trade agreements known as the Multifiber Arrangement, which had set quotas for imports into the U.S. from other countries, almost all apparel and textile jobs went to China. Wages have been going up in China for a few years now. When you add in the costs of transport, and consider that the cost of running factories in the U.S. is less because of lower fossil fuel costs, this means that the U.S. is on the cusp of becoming competitive in apparel and textiles again.”

Inquiries from designers and discussions with factory managers clued Ford in to a large field of opportunity, when she was still just teaching the women the basics. If done right, she thought, their group could answer that demand in Philadelphia with trained, refugee women.

Their three-year grant will support vocational and financial education for a select group of RWTI members, with the hope that by the end, they’ll be working sewers. Ford owns to their project being “an experiment.”

Angel Rodriguez, vice-president of community economic development at Asociacion Puertorriquenos en Marcha, describes that organization’s StartUp PHL grant project similarly. APM, with its $20,000 award, will reactivate a vacant parcel in North Philadelphia into the site of a neighborhood pop-up market.

“We’re looking to see how we can do corridor development in a different way … [with] a living laboratory,” says Rodriguez.

A 2012 Urban Land Institute report on commercial corridors notes their decline, but champions their potential.

Misperceptions about the extent of urban buying power are widespread, retail opportunities are perceived to be greater elsewhere, and the many social problems faced by urban neighborhoods have proved difficult to solve.

To achieve long-term sustainability, plans for rebuilding neighborhood shopping streets must recognize these changes and embrace solutions that are realistically market-based. It is not enough to base them solely on enlightened public policy goals or the community’s wish list, no matter how well intentioned.

APM’s project aims “to mitigate the extenuating circumstances” that often thwart prospective proprietors, Rodriguez shares. Participating entrepreneurs wouldn’t have to pay rent; they’d participate in a boot camp to refine their business idea and economic savvy. APM is already speaking with community members about businesses they’d like see, and would steer the entrepreneurs away from ideas that wouldn’t find a local customer base. Rodriguez jokes that this wouldn’t be “like a ‘coming soon there’s going to be a Sweat gym’ … you’ll have interactions with the community to really formulate your idea and see if it fits.”

“A lot of young people who are graduating with tons of debt have these great ideas,” he explains, “but don’t have the place to really test them out or even get to work on interpersonal relationships or understand the ebb and flow of most communities.” This is who APM intends to reach, Rodriguez says.

Rodriguez says they’ll convert containers into shops for what should be a bustling space, and estimates they’ll have four to six business. APM will develop a more detailed picture after it selects the businesses, a process set to begin this winter.

The Refugee Women’s Textile Initiative’s desired end products are more knowable: They want to do better than the last manufacturing pilot they did.

The first pilot, in which Ford’s students became professional sewers working on clothing for the designers mentioned above, resulted in clothing that she’s proud of, but she admits that they had a tough go of it. To ensure fairness and quality, Ford worked as a go-between for participants and designers.

“What didn’t work is the prices the designers could afford to pay these people fairly. And me in the middle? Forget about it, I didn’t make a dime. I lost money,” she says.

Another tough lesson the board members at RWTI had to learn was while the program’s participants almost all wanted work, guiding refugee women who were mainly homemakers tasked with caring for their family’s young and elderly into positions as full-time factory workers with long commutes was tough, and in many cases, unfeasible. Most participants who expressed interest in employment opportunities declined when the jobs appeared. This too posed a challenge during that first manufacturing pilot, as Ford says some sewers would be called to tend to family while on deadline, leaving her to fill in at the sewing machines. This next go-round, Ford won’t be the middle-woman. RWTI will serve more as “facilitators” she explains, working to set up a better infrastructure and to foster transparent, direct connections. They’re in talks with the developer of a shuttered vocational school that’s being converted into a co-working space for artisans and creatives, to establish a base. That set-up could offer childcare in the future, which Ford sees as a godsend.

“This is not to say we have anything figured out. It’s a new approach to try to figure it out properly,” says Ford. “This a living breathing thing that starts with the people. And if we can’t make it worth their while, no one’s going to do it.” She quickly cautions, “Which is no small feat, and I understand that.”

For this reason, the group will start small, perhaps five sewers at first, growing up to 20 by the end of the three years. Before RWTI work winds up in boutiques again, there will an exhibition of collaborative pieces and a Christmas sale this December at South by Southeast. APM’s pop-up market will be open come spring.