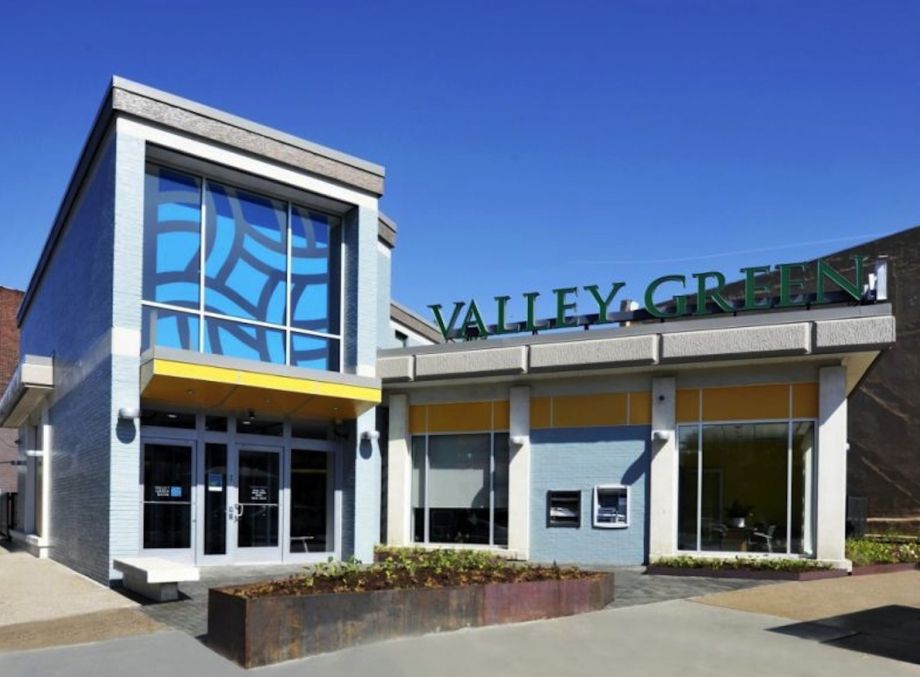 Philly’s Valley Green Bank was a winner in the 2014 Storefront Challenge.

The Northeast Philadelphia neighborhood of Tacony remains a largely blue-collar redoubt, even after the departure of the industries that defined it for decades. But its central business district along Torresdale Avenue would look right at home in a more upscale community, with attractive storefronts and signage appealing to residents and visitors alike, thanks to the city’s Storefront Improvement Program (SIP).

SIP has made possible not only Torresdale’s makeover but also hundreds more like it all over the city. Then, late last year, a change in the way rules governing the use of federal funds were interpreted cut participation in the program by half and threatened its very survival.

Small business owners and community development corporations across the city didn’t want to let the program die. Aided by a district city council member who has witnessed the transformative effect of good storefront design firsthand, they persuaded Mayor Michael Nutter to shift budget priorities so that city rather than federal funds would finance the program. As a result, SIP will survive in its original form and will resume making grants according to the formula that has worked well for Philly’s small business owners.

SIP reimburses business owners for facade improvements to their shops and offices; recipients can get grants to cover 50 percent of the cost of the improvements, up to a total of $12,000. Since its inception in 2009, the program has helped more than 380 business owners spruce up their storefronts, often spurring neighboring business owners to follow suit.

Council Member Bobby Henon’s district includes Tacony. His chief of staff, Eric Horvath, explained why the program has worked so well on Torresdale Avenue and elsewhere. “Philosophically, it’s an extension of the idea that by encouraging smart growth and development along commercial corridors, communities will see that effort spread to the surrounding streets in the neighborhood. If someone sees how a business takes steps to beautify the exterior of their shop, it encourages residents to do the same.

“And it’s working. Sixteen storefronts and counting have been transformed along Torresdale Avenue to go with hundreds citywide.”

The bulk of SIP funding came from a federal Community Development Block Grant. And that was where the problem began.

Beth McConnell, policy director of the Philadelphia Association of Community Development Corporations (PACDC), explained that a change in how the Commerce Department interpreted federal law set SIP back.

“The Commerce Department thought that the federal prevailing-wage law didn’t apply to small projects like this until December,” she said. “Then they implemented the changes, and that’s when we saw the costs go up.”

The prevailing-wage requirement — a mandate to pay workers the “prevailing wage” for the area, a wage that is defined as union scale — kicks in when $2,000 of federal funds are spent on a project. (The $2,000 figure has remained unchanged since the law was passed in the 1930s. If it were adjusted for inflation, McConnell said, “it would be $36,000 today, but changing it would require an act of Congress.”)

Small housing projects of seven or fewer units are exempt from the rule, but the Commerce Department determined last fall that the exemption did not extend to small-scale commercial developments. So the city retooled SIP to reflect the new rules and revised the assistance amounts to account for the higher construction costs. Where grants had covered 50 percent of costs up to $12,000, going forward, they would cover 75 percent of costs up to $15,000.

But this still meant both greater total expense for the business owner, as the prevailing-wage requirement caused project costs to double or even triple. On top of that, the federal government required documentation of payroll data and project progress. Those two pressures combined to sharply reduce participation in the program.

“Many of the businesses felt the regulations attached to the Community Development Block Grant funds that drove the program were too onerous to justify participation,” Horvath said. Applications for the revised program fell by half.

So together Henon and PACDC organized a drive to get small business owners to lobby city council and the Mayor to “Save SIP.”

“The Councilman felt re-appropriating general fund dollars to fund the program at the municipal level was the most efficient way to get more businesses to participate rather than engage the federal government on changing its rules for applying for CDBG dollars,” Horvath said.

Henon held hearings where local business owners testified to the positive impact their storefront improvements had on neighborhood appearance and their bottom lines. The testimony led to a letter, signed by 12 council members, asking Nutter to replace the CDBG money with city funds so that SIP could continue to serve more businesses. In addition, a petition circulated by PACDC gathered the signatures of 300 small business owners asking the Mayor to “Save SIP.”

Nutter obliged. The fiscal year 2016 budget that took effect July 1st replaced the $400,000 CDBG allocation with money from the city’s general fund, adding to $100,000 from the Commonwealth of Pennsylvania and a $35,000 city grant to the Community Design Collaborative, which provides free design advice to the business owners.

With the approval of city funding, the program will resume accepting applications according to the original assistance formula and the paperwork requirements disappear once again.

“The Storefront Improvement Program is a great example of a low-cost, high-impact initiative that helps beautify and secure businesses and their surrounding communities. We are thrilled that SIP is here to stay,” said Daniela D’Ambrosio, a Philadelphia restaurant owner, in a news release announcing the reprieve for the program.