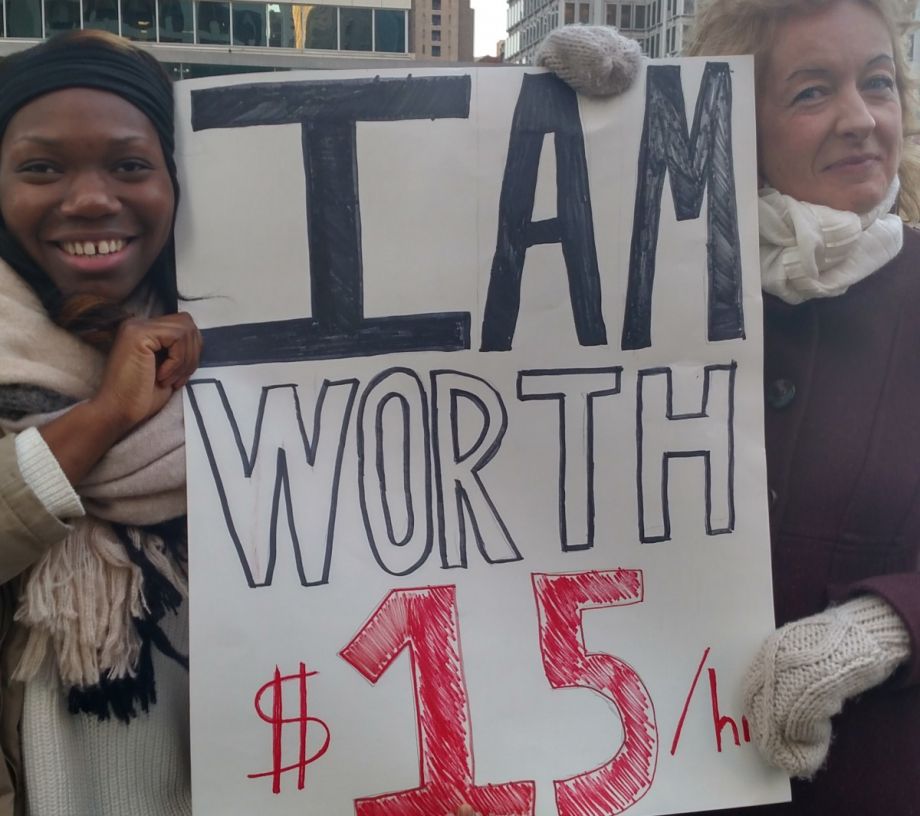 On Wednesday, a small crowd of activists gathered in front of Philadelphia’s City Hall to demand that City Council raise the city’s minimum wage to $15 dollars an hour. They rallied under the banner of a largely volunteer organization, 15 Now, which gained nationwide attention for its role in Seattle’s historic increase earlier this year. (The group is distinct from Fight for 15, which orchestrates one-day strikes for a $15 wage for fast-food workers and is backed by the Service Employees International Union.)

Despite the bitter cold, 40 to 50 attendees milled around, trying to keep warm, and singing a revamped version of “This Land Is Your Land” (“We work all day for minimal pay, raise the wage for you and me”). Near the end of the rally, Councilman Kenyatta Johnson showed up, talked about the labor struggles at the airport, and led the crowd in chanting for a $15 minimum wage. “I came out here today to support your efforts to make sure we raise the minimum wage here in the city of Philadelphia,” said Johnson. “I will continue to stand with you.”

15 Now is demanding that City Council act despite a preemption clause inserted in Pennsylvania’s minimum wage law the last time it was increased (in 2006). The law reads “this act shall preempt and supersede any local ordinance or rule concerning the subject matter of this act.” But 15 Now claims it has found a way around the preemption clause, laying out their case in a well-researched and carefully argued legal memo.

Their argument rests on the idea that the law’s statement of policy shows that the intent of the legislation is to be a substitute for low-wage workers’ minimal bargaining power and prevent “the depression of wages.” Read in light of the statement of policy’s clarity on this point and the preemption clauses’ relatively vague wording, 15 Now argues that the legislature’s intent regarding preemption is ambiguous. It could be read only as a ban against municipalities reducing their own minimum wage below that of the state, still allowing for the possibility of higher local floors. In the case of such ambiguity, 15 Now argues that the state Supreme Court would rule in favor of the city’s right to raise its own minimum wage.

“I think they are good arguments,” says Bob Curley, a labor lawyer who works with the building trades, after reading 15 Now’s memo. Asked what would happen if City Council attempted to act on these recommendations, he says, “I think the Chamber of Commerce would challenge it, but I’m not sure the courts would agree. It would really need to be enacted, then … business interests would seek an injunction until it’s constitutionally ruled on.”

As of yesterday, no members of City Council have endorsed 15 Now’s specific position or committed to introducing legislation. Councilman Johnson’s office confirmed his support of raising the minimum wage, but was not prepared to discuss 15 Now’s preemption claims. Organizers say all the Council members they’ve talked to are broadly supportive of raising the minimum wage; the city’s Law Department is studying their position.

Many states do not allow cities to set their own minimum wage laws. New York Mayor Bill DeBlasio was prevented from fulfilling his campaign promise to increase his city’s minimum wage by Democratic, but industry-friendly, Governor Andrew Cuomo and his allies in the legislature. The state of Illinois is considering legislation to forestall a successful ballot initiative for a $15 minimum wage last spring. 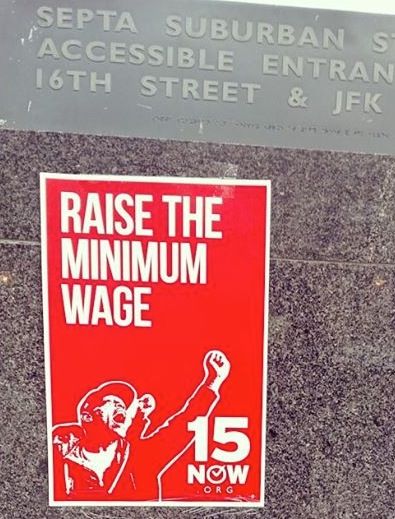 “15 Now is in many cities across the country with similar [situations], but Philadelphia had the preemption with the vaguest language,” says Philadelphia 15 Now organizer Kate Goodman, who is the only paid staffer in the city. “We think we could win here and set a precedent for other places. There are 17 [other cities with 15 Now campaigns] with similar preemptions, although ours seems the most vulnerable.”

Santa Fe’s 2003 citywide minimum wage increase was one of the first municipal laws to mandate a raise and was unsuccessfully challenged by the state legislature after passage. (The preemption clause in Pennsylvania’s state law was no doubt a response to the New Mexico city’s victory, followed by similar policies in San Francisco and a few other cities.) Last month, legislators in Minneapolis began exploring the legality of their own citywide increase. No other city has tried what 15 Now is campaigning for in Philadelphia.

“I think they are reading too much into the declaration of policy … they are going to have more problems with preemption than that memo suggests,” says Adam Bonin, a Philadelphia lawyer who mostly focuses on political cases. “Declarations of policy are important. But they have to be read in the light of the subsequently passed preemption positions, which I understand were part of real legislative debate and comprise the last time [the statewide minimum wage] was raised back in 2005. [The legislature] really tried to seal the door here.”

The state supreme court has also established, firmly, that when clauses are clear in their intent they cannot be “contradicted” by a law’s title or preamble. “Although titles and preambles are accepted aids in resolving ambiguity in an enacting clause, they may not be used to create ambiguity where none exists in the clause,” the Court wrote in 1987.

15 Now is planning to press forward. If no one on City Council agrees to put forward legislation, the group plans to collect signatures in attempt to convince Council to put a charter amendment on May’s ballot to amend the city’s home rule charter to state the city’s ability to raise its wage. Such a tactic would be difficult to achieve, however, if the city’s legislative body does not care to pursue such a strategy: If Council wants to add a charter amendment to the ballot, a two-thirds majority must approve it, but if a petition with at least 20,000 voter signatures is presented, then it can be added to the ballot by a simple majority vote. In either case, the final power rests with the politicians.

No matter the legal outcome, it is difficult to argue against 15 Now’s goal to raise the minimum wage. Philadelphia is still the poorest of the nation’s 10 largest cities, and many workers are stranded in low-wage drudgery.

“I was working at an elder care home. One of the reasons I’ve gotten involved is because the job I was doing [is] a thankless job,” says Denise Jones, 59. She’s a member of 15 Now, and experienced violence and sexual harassment from patients — for $7.25 an hour and no benefits. “You are on your feet non-stop, working with people who are mentally and physically handicapped. It was too much. For doing that sort of work, I think $15 an hour would be worth every penny.”