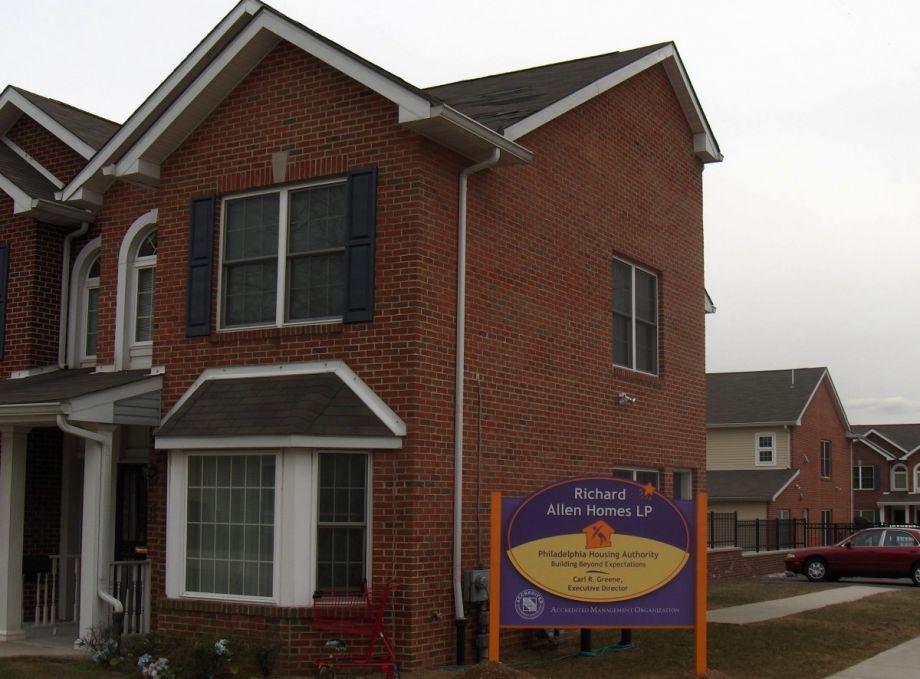 In some cases, the Philadelphia Housing Authority has replaced high-rise towers with suburban-style townhomes like these, but its plan for the Sharswood community is more ambitious.

Most of the remaining residents of Sharswood, a rough and rundown community in the western part of North Philadelphia, lament the changes that have taken place since the Philadelphia Housing Authority built the Norman Blumberg Apartments in the middle of the community in 1969. The housing project brought with it a plague of crime that accelerated the departure of Sharswood’s middle-class residents, leaving a pockmarked neighborhood of poorer residents and abandoned properties behind: The neighborhood and the area around it has lost two-thirds of the population it had in 1950; its poverty rate of 44 percent is nearly 20 points higher than the citywide average; the 14 percent of the neighborhood’s land that is vacant is almost three times the city’s 5 percent figure.

The PHA decided last year that it needed to do something to reverse these trends. Like its counterparts in other cities, the PHA has been steadily demolishing high-rise apartment towers. In some cities, and elsewhere in Philadelphia, the old towers have been replaced by townhouses or even detached or semi-detached homes that would not look out of place in a suburban community. But in the case of the Blumberg project, the PHA is attempting something far more ambitious: Instead of simply replacing public housing towers with new subsidized housing, the agency is aiming to restore the entire neighborhood to good health.

This is a tall order, and frankly, some in the community have their doubts whether PHA can pull it off. But if it doesn’t, it won’t be for lack of effort.

That effort began in earnest when the PHA received a Choice Neighborhoods planning grant from HUD early last year. As the grant recipient, the PHA has been coordinating the work of two other lead partners and dozens of local civic and nonprofit service organizations around a triple-pronged redevelopment strategy.

The housing component aims not only to replace the apartments that will disappear when the Blumberg project is demolished later this year but also to provide homeownership opportunities and restore Sharswood as a mixed-income community by building an additional 723 rental and ownership units on top of the 435 units that will replace the ones lost at Blumberg. (This figure includes 96 units in one tower that will remain standing; its units are for low-income seniors.)

The second component focuses on the rest of the neighborhood. Its centerpiece is a revived commercial corridor along a main thoroughfare, Ridge Avenue, anchored by a supermarket and the new headquarters for the PHA. This component also includes the creation of a Neighborhood Advisory Committee for the community; its role will be to engage community residents in activities that support the city’s goals around economic revitalization, community safety, decent and affordable housing, and employment, education and job training. The plan also seeks to return two closed public schools in the neighborhood to active use.

The PHA is working closely with neighborhood residents through opinion surveys, planning meetings and workshops designed to assess community needs and concerns and how best to address them.

This process has so far produced an overall draft transformation plan, released in November, and a slew of goals and recommendations that will be released within the next two months.

The vision articulated by participants in the housing workshops sums up where everyone wants to go: “a peaceful, loving, family-oriented residential community where all residents can take pride in its unique history, cleanliness, attractive housing, great schools, and thriving commercial corridor filled with local businesses.”

Achieving this will take time, according to Bernard Savage, director of projects and real estate at Beech Interplex, a local redevelopment nonprofit that’s managing the neighborhood component. “This will be a five- to 10-year process,” he said at a recent meeting of the neighborhood civic group, the Brewerytown Sharswood Community Civic Association (BSCCA).

As Savage explained, the commercial corridor revitalization program has a large-scale component and a small-scale one. Large office and retail projects will inject money and jobs into the neighborhood, but the real benefit, he said, will come from leveraging the housing and large-scale commercial projects as a stimulus for small business growth.

“A $30 million HUD grant [to PHA] will leverage $500 million in development,” Savage said. “That’s great for the [Ridge Avenue] corridor, but at that scale, most of the work will be done by unions and large developers. The majority of that money will go back out of this neighborhood. But there’s also an opportunity for another $100 million in development in this neighborhood, and local community members, investors and developers can put a strategy in place so that as PHA is doing its large-scale development, we can leverage it with small-scale development.”

While the BSCCA and Beech may be taking the long view on Sharswood revitalization, the PHA is wasting no time implementing the housing part of the plan, which it will oversee. In January, the authority sent letters to the owners of 1,200 parcels of land in Sharswood expressing interest in acquiring them. The letters caught some in the neighborhood by surprise, as many residents assumed no work would start until the final version of the transformation plan had been approved. PHA Senior Vice President for Policy and Planning Eric Solivar said that since the agency already has the money in hand to start work on the first phase of the housing program, which involves imploding two of the Blumberg towers and building 57 affordable rental units on the site, it wanted to lay the groundwork for the housing construction program now. “We’re doing this on the fast track in conjunction with the HUD grant,” he said.

Even though PHA says it’s committed to seeing the entire project through to fruition, what worries some residents is that this is the same agency that couldn’t keep up with maintenance on Blumberg to begin with — and the one that, by its own admission, sent the neighborhood into near-terminal decline. As one resident put it at a February BSCCA meeting, “PHA representatives have said that the reason Sharswood was picked for this Choice Neighborhood grant is because PHA did Sharswood wrong. What’s to say that 20 years from now, the same thing won’t happen with PHA’s redevelopment?”

Another concern is that by making the bulk of the new housing affordable — about 80 percent of the nearly 1,200 units planned will be affordable to those earning up to 85 percent of the area median income — PHA will choke off the nascent market-rate development that is beginning to pop up in Sharswood. Solivar told the BSCCA that it has as a goal creating homeownership opportunities for current Sharswood residents, but BSCCA President Warren McMichael also expressed support for the stated plan goal of eliminating concentrated poverty as well. “We would like to see some market-rate housing in this community,” he told Solivar. “We don’t want it all low-income.”

There’s enough vacant property in the neighborhood that the development McMichael would like to see could still happen around the land and homes PHA wants to acquire. But striking the right balance between maintaining affordability and encouraging private investment may prove to be one of the biggest challenges facing all the partners involved in the Sharswood-Blumberg transformation project.