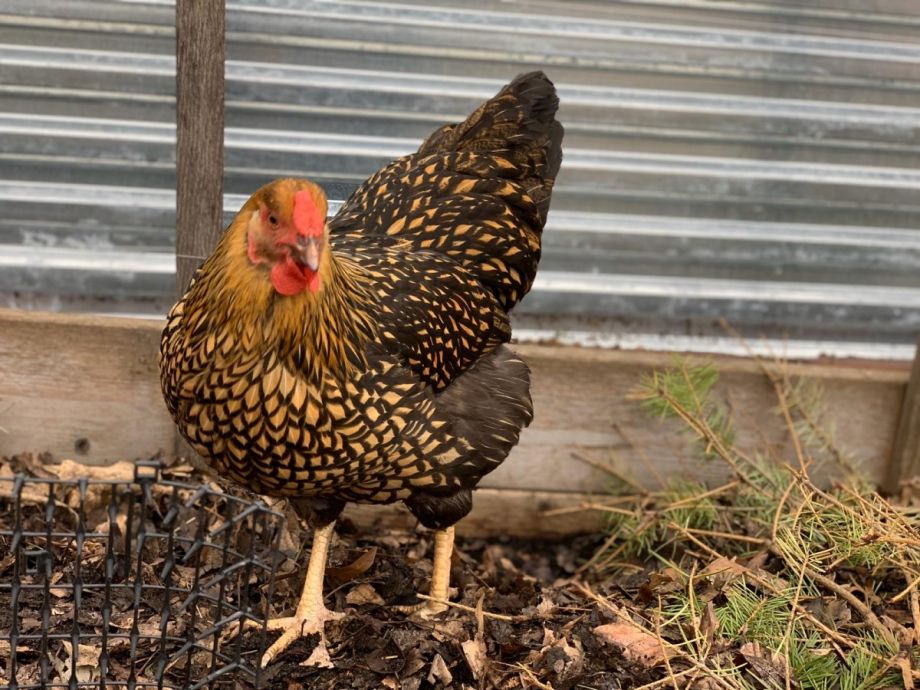 Chickens, whether living on a farm or in a backyard, “go crazy for” spent grain, a byproduct of brewing. (Photo courtesy Jillian Gonzalez)

Each morning, Jillian Gonzalez, a realtor in Philadelphia, wakes up, heads downstairs and makes breakfast for herself and her “ladies.” She sets out three bowls, and fills each with a helping of feed that she buys from a local store and ferments at home. She takes an old Folger’s tin from her refrigerator, and adds its contents to the mix. The tin is filled with spent grain, or “beer mash” — a sloppy, viscous substance that is the main byproduct of beer production.

Her six hens go crazy for it. “It’s like a treat for them,” Gonzalez says.

Gonzalez picked up the beer mash at a giveaway organized by the advocacy group Philadelphia Backyard Chickens in early January, and has been storing it in containers in her refrigerator to keep it from spoiling.

The monthly beer mash giveaways started in December of last year. They are part of a unique project — spearheaded by the advocacy group Philadelphia Backyard Chickens — to connect local brewers and urban chicken owners to reduce waste from beer production in the city. While many breweries across the country donate their spent grains to local farmers, involving urban farmers in the process is unique, according to Maureen Breen, president of Philadelphia Backyard Chickens.

“This is the first time that we’re really doing citizen involvement in trying to get people to do this,” Breen says.

In January, urban chicken owners in Philadelphia picked up about one ton (2,000 pounds) of spent grain from several local breweries — a drop in the bucket to the daily production of some larger urban breweries, which can produce around seven tons of spent grain in one day.

Still, it could be a scalable partnership, according to Luke Wolfgang, Sustainability Coordinator for the Mid-Atlantic Region at the U.S. Environmental Protection Agency.

“It’s definitely intriguing from our perspective,” Wolfgang says. “It’s a thinking outside of the box way to find a solution to urban food waste.”

In Philadelphia, more than 1.5 million tons of trash end up in municipal dumps every year. As the local brewery scene expands, spent grains from the beer industry are a growing part of this waste.

Scott Blunk, the head of compost production at Weaver’s Way Cooperative, who works with local breweries to compost beer mash, estimates that about 80 percent of the spent grain produced in Philadelphia ends up either composted or put in a landfill.

“There is more than enough spent grain to go around,” he says. “There are breweries on every corner and it seems the last part of the business plan is, ‘What do we do with the spent grain?’”

In Philadelphia, the local microbrewery scene is quickly expanding, and there are now more than 25 breweries within the city limits. The question of what to do with the “spents” is increasingly a question that urban brewers are wrestling with.

Transporting the beer mash to farms outside of the city for consumption by animals can be expensive and hard to coordinate. Further complicating matters, the mash must be disposed of quickly otherwise it will spoil, according to Tom Baker, the owner of Earth Bread and Brewery and Bar Hygge brew pubs in Philadelphia, which delivers 1,000 pounds of grain to an agricultural school in Philadelphia to be composted each week.

“I think the challenges with dealing with spent grain mostly concern the timing of removal from our breweries,” he says. “Being a brewpub further complicates this due to space concerns and the fact that we can’t have souring grain in the restaurant space for obvious reasons.”

Beer mash can amount to tens or even hundreds of thousands of pounds per year, even for microbreweries. It’s the biggest waste product in the beer industry, accounting for about 80 percent of its waste.

“Even a small brewery will use millions of pounds of grain every year, because it’s about a pound per every six pack,” says Daniel Kurzrock, the founder of Regrained, a San Francisco-based ingredient company that makes food products out of spent grain from breweries. “The supply has simply outstripped demand with those agricultural relationships.”

Kurzrock says that in addition to feeding it to animals, brewers have turned to a number of creative ways to get rid of the mash. An Alaska brewing company, for example, burns the mash and turns it into biomass, which they can then use to brew more beer. Regrained invented a machine that dries the mash into pellets, which they then sell as snack bars. But Philadelphia is the first place that he knows of to turn beer into fresh eggs (via chickens).

Circular economy initiatives like this one could play a role in helping Philadelphia achieve its goal of eliminating landfills and conventional incinerators by 2035, according to Nic Esposito, Zero Waste and Litter Director for the City of Philadelphia. But he cautioned that the initiative was just one of a number of ways to reduce waste — including composting schemes with local businesses and zero waste events organized by the city.

“It’s like anything,” he says. “You can’t just put all your eggs in one basket. The more diversified options you can do on any portfolio when it comes to waste management the better.”

Breen, at Philadelphia Backyard Chickens, hopes the project will show city councilmembers the economic and environmental value of backyard chickens. She says that the ban on urban chicken that’s been in existence since 2004 limits the possibility of scaling the initiative citywide.

Some of the chicken owners, like Gonzalez, aren’t technically allowed to own chickens. Others come from outside of the city — and even the state — to pick up the mash.

“The city won’t mess with you unless somebody complains,” Gonzalez says of her backyard chickens.

Despite the ban, which also prevents the rearing of a number of other farm animals within city limits, Breen estimates that there are around 10,000 backyard chickens in Philadelphia — based on a survey she conducted through the Philadelphia Backyard Chickens Facebook page.

“Once chickens are legalized in Philadelphia we will start developing a structure to move as much beer mash as possible to chickens,” she says. “That distribution channel could probably move between 20 and 40 tons a month to chickens in Philadelphia.”

The organization intends to submit a bill this year to overturn the law and allow residents to keep up to six chickens in their backyard.

“Nobody is measuring how much chickens right here in our city can do to help with food waste,” Breen said. “There should be no beer grain, or beer mash, going into a landfill.”